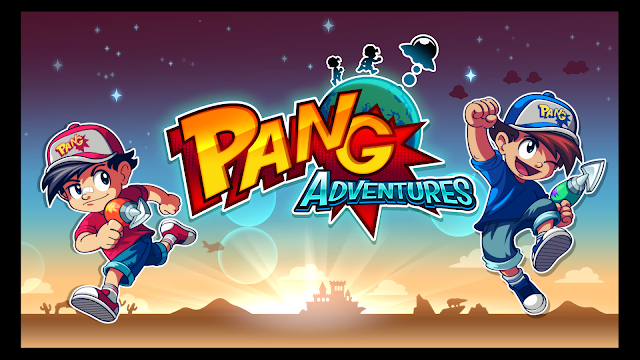 Scrolling through the new releases section of the Xbox one store on my console recently I came across a game called Pang Adventures, so decided to reach out to publishers DotEmu to get a review up on the blog about it. Reading up on the game since the code came in, it seems I missed out on a bunch of games in my childhood featuring the Pokemon wannabees the Pang Brothers. But if like me you had never seen them or heard about them before, a simple Google search will enlighten you as to what they brought to the gaming world back in the day. As with every review we do on the website, I did a video on it over on my YouTube channel once we got the code come through, so if you want to see the game in action before reading a ton of words then please click the below video and be sure to subscribe for future videos.

Pang Adventures went on sale for the Xbox One on April 19th, and it will cost just £7.99 if you fancy picking it up. My first impressions when having my first few goes on it were that it reminded me a lot of games that I would play in my younger years. Games such as Space Invaders and Centipede came to mind, but only because the main focus of the game is to clear balls attacking you from the top of the screen, with your quest being to clear the screen of them all before the timer runs. Shooting the balls makes them break up into smaller balls and so on and so on, so as you go through the levels and more tougher balls appear there will come a time where old gamer rage will appear if you are a sufferer. While power-ups such as a tommy gun and balls that explode will help you as you go along, there will also be things such as balls that fire lightning down to the ground beneath once you hit them, and other horrible things like that from stopping the game being another walk in the park.

Pang Adventures has three modes of play, with only Tour Mode being the one ready to go once you start up the game. This mode is what you would call the story mode, as you travel around a map clearing out sections of levels set in one area doing mostly what I said above. You start off in Bora Bora, but soon find yourself going to places like Death Valley and Scotland, only difference is that the background art changes and levels bring in something new for you to tackle on the 15 or so levels that that section has. As you fly between each of these sections you also get to tackle an alien mini-boss before being able to move onto the next section, with the ones I've tackled being a simple shoot parts on their octopus style legs while avoiding the balls they throw at you to take them down. Of course the battle ends in the now standard way to defeat such a thing, and that is shooting him in his giant eye to fully end the battle. 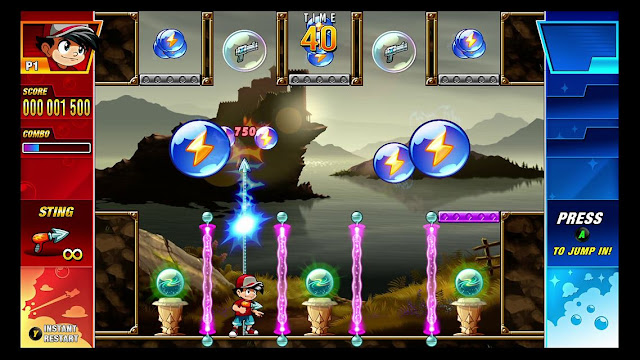 The mode you will unlock first by playing through the Tour Mode will be Panic Mode, which is 99 levels of balls of all sizes and amounts being thrown at you as you try to last out all 99 levels. I Think the highest level  I have got to so far is level 35, and I just remember having to hammer the a button to shoot off my spike as I struggled to stay alive. You do get three lives and you do get the chance to get some extra lives as you play, so it's not all bad. While I never saw a lot of power-ups in terms of my weapon I did see a ton of screen freezes as well as balls that clear the screen that will help you on your way. In truth, this is perhaps my favourite mode in the whole game.

Then we come to the final mode, score mode. Sadly I'm yet to get to play this mode, as it only unlocks once you finish off the tour mode completely, and in truth I suck at this game. What am I missing I hear you ask? Well the mode offers more of the same seen above, as you get three lives with no continues. If I ever get good enough to actually unlock this mode I will of course return and edit it into the review right here. 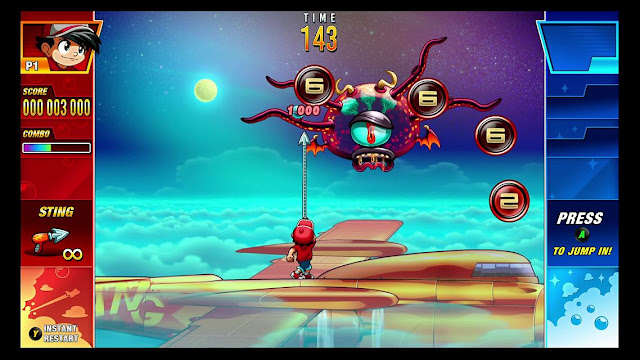 Overall:
While being a fun enough tip of the hat to a classic formula of gaming days gone by, Pang Adventures is best looked at more of a side dish than a game you or I could see ourselves sitting in front of for a few hours at a time. With two modes locked away, it kinds of punishes the ham-fisted guys like myself who want to try out all the game has to offer right from the off, rather than every time he loads up the game to see a lock over a mode that really isn't worthy of being locked away at all. The truth soon comes apparent that the only reason it's locked away is to make them look more special than they actually are.