HXR Review - Azkend 2: The World Beneath

on May 03, 2016
At the end of April, the lovely folks over at 10tons kindly sent me over a review code for their latest match-three adventures game, Azkend 2: The World Beneath for the Xbox One. If you follow my work on YouTube as well as on the blog, you will perhaps have seen my first look video that I did over there recently. If your reaction to that is "you have a YouTube channel?" then check it out below before reading on with this review.

Azkend 2 : The World Beneath is out today on the Xbox One, and will set you back either £6.39 here in the UK, or for the lovely folk who visit my blog from across the pond, you can expect to pay $7.99. The game is your standard match three or more tiles to clear them off the screen affair, but the game also of course has its own little quirks to make it stand out from other games in the genre.

The mode you will spend most of your time playing when picking up the game for yourself will be the Adventure mode.

Travelling from Liverpool to New York your boat is pulled down into a massive maelstrom (fancy word for a whirlpool), which sees you go on an adventure to many places and unearthing many items that you need to help get yourself back to the surface. The Adventure mode takes place over seventeen sections that feature sixty levels for you to play thorough. The goal is simple. You must beat three to four levels per section to uncover an item that enables you to move on to the next part. The item you uncover not only aids you in moving on, but also turns into one of two power-ups that you can then equip and help aid you throughout the rest of the game. As I write this I sit on about section fourteen of the game, with a few of these power-ups now helping me progress through the adventure mode. To list all of them out in the review would take forever, so rather than listing all of them I've decided to talk a little about the ones I've been using the most. 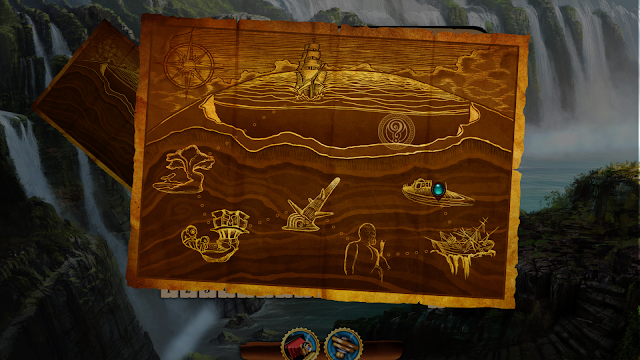 Two style of powerups are available in your inventory as you play through the game, with you able to decide which ones you want to take into the level with a simple press of the X button. You have both an active and a passive portion to choose from, with active being things that have a more visual effect on the game to them, and passive being more of a powerup that does something to help you outside of the gameboard itself.

To get one of the active powerups to work you must match their tile up with two more matching tiles,  much like you do with all pieces on the board. Both active and passive have a total of Eight powerups each to choose from, with you unlocking these one by one the further you get into the game. Here are just a few of these powerups that you can expect to come across.

Active:
Binoculars - Finds isolated tiles and removes them from the board.
Hammer - Pretty obvious this one. Spawns a hammer that will smash some pieces away.
Climbing Gear - Freezes time for a short period of time 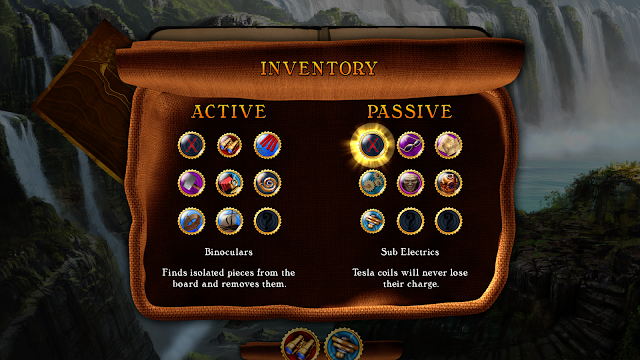 While the main chunk of  Adventure mode is a timed affair, which has you turning the tiles blue to clear the board and then ending on you needing to get the item you need to the bottom of the board. The game also throws in other things to mix things up. Things like fire that can only be put out by making a match close to them, padlocks that lock away part of the board that require you to do the same. Not forgetting the bloody yellow bugs. These bugs start out at the bottom of the screen and make their way to the top, and the only way to defeat them is either making a match close to them, or building enough power in your Tesla coils at the top of the screen to see electricity bolts knock their damage down. The levels featuring these boys were a pain in the ass for me, so much so that when I saw a level with them start up I instantly knew I was in for a tough time. You kind of have to switch focus here and not look for matches until they are close to them, as wasting a good mach on nothing could bite you in the ass later on down the line.

Adventure mode also has a couple of other things that pop up now and again, to like I say mix things up. Such levels as puzzle levels where you need to match up all items perfectly to clear the board, but I found all these simple after 1 or 2 attempts at them. A mode that you can see below where you must collect flowers. Then we have these weird end of section levels that see a looking glass in the top right hand corner of the screen that with your pointer you must find where on the screen this picture is taken from. I've played a ton of these and I'm still lost as to what completing these actually do. 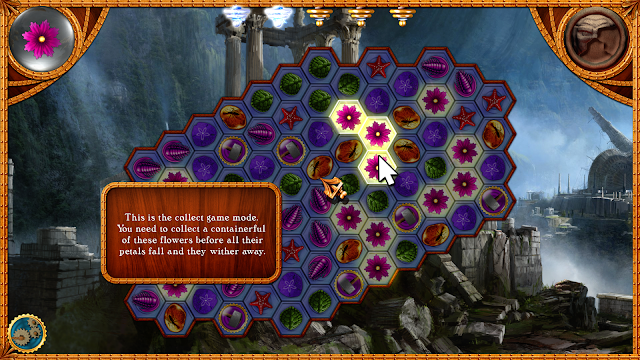 The final two modes to talk about are just barely worth even talking about, but it's a review so I have to.

Time mode gives you two minutes in which your only goal is to score as high as you can making as many matches as you can. This once again is achieved by matching three or more pieces, but this time you also have a chance of getting a multiplier which adds to your final score by using pieces that have a gold glow around them. An alright mode to be fair, just don't expect anything mind blowing.

Medals is the place to come to replay all the levels you unlock while playing Adventure mode, only this time to unlock a gold medal you must beat the level in half the time that you beat it in previously. Once again an alright mode, but nothing that made me want to step away from Adventure mode.

Overall:
I went into playing Azkend 2 expecting more of the same from previous 10tons releases such as Sparkle and Sparkle 2 Unleashed, and that's pretty much what I got. Now don't confuse that as a bad thing, as I got stupidly addicted to Sparkle 2 when reviewing previously on my old site and the same thing happened here. Azkend 2 while lacking in modes has an adventure mode that will pull you back in and have you saying "just one more go" like no other, but the only worry is when that mode is over and finished it really doesn't have anything left to give to make you want to return.

Pros
+ Adventure mode is without a doubt the best attempt at a story that 10tons have done.
+ It's bloody addictive