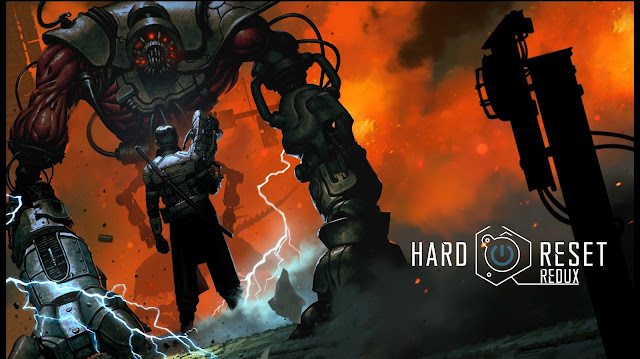 I went into the review of Hard Reset Redux not really knowing what to expect in all honesty. A quick glance at a trailer and some images on a PR site I use for the blog, had my mind telling me it looked like a game that I might enjoy playing, but other than that nothing was known about the devs or indeed the game itself. Developed by the guys at Flying Wild Hog, the game made me take interest due to it looking a little DOOM like in the below game footage, and being that game was so much fun surely this would offer more of the same, or so I thought.

The first incarnation of Hard Reset saw a release back in 2011 on PC, but of course this new version throws in a ton of tweaks and new things to try and bring it right up to date. A lot has changed since then however, and while HRR does have a certain element of charm to it when playing, you do after a while start to feel the age of it all.
Hidden in Hard Reset Redux is story somewhere that involves you playing a CLN soldier which sees machines breaching some walls on a place called Bezoar (The last closed city). The story is told in a comic book style format to you via a bunch of cut-scenes, which is truth was all kind of lost on me right from the get go. Watching the cut-scenes in between levels I felt like I was watching a cheesy 80's action sci-fi flick, which of course included the staple that is a lot of deep voices who are angry 99% of the time. Hard Rest Redux failed in getting the story over to me in the 6 to 7 hours I spent playing the game, but if you go in just expecting to simply blow a lot of things up and complete tasks given to you while doing so, then not all is lost.

I originally went into playing HRR thinking it was a full price release, so when I saw it was just £15.99/$19.99 I was both pleasantly and thankfully surprised. You see Hard Reset Redux is pretty standard when it comes to first person shooters on the market these days, and in truth it does nothing different to all the others we've seen before it. Level by level you're dropped into areas which see you walking for a bit then being attacked by a number of different enemies, with a massive end of boss battle happening every now and then. If that sort of game seems right up your street, then Hard Reset Redux is the game for you. For me however after around 5 hours play it all started feeling like I was suck in a time warp, with me seemingly doing the same thing over and over again. I will however say the boss battles are pretty decent. With these massive enemies having to be taken down for what feels like forever. Even on the easy setting the game makes it feel like a genuine achievement when you take that big sucker down. Doing so even on such a low setting as normal makes you earn my full respect, as I sucked trying to do so even on easy. 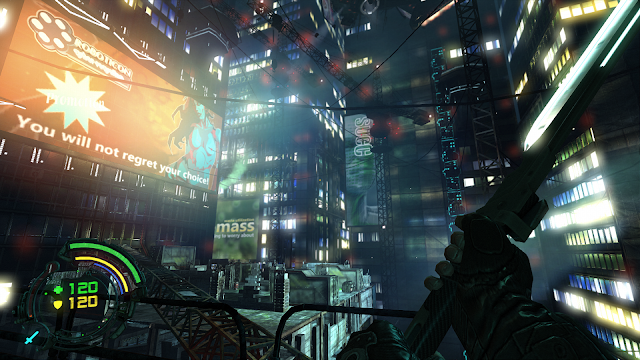 Away from all the shooting and decent looking graphics, the game of course has an upgrades option which you get by picking up N.A.N.O Currency littered across each level. Going to handy upgrade machines you are given the choice of upgrading not only yourself but also your two main weapons in the game. Your machine gun can get things like grenades and a shotgun added to it, with your other gun that fires out electricity seeing likewise upgrades. Like I said earlier the other option is yourself which is classed as combat gear, but all this does is gives you a better shield and so on. You do unlock a Katana a bit in the game too, but other than sounding like a lightsaber from Star Wars this sadly does not get in on the upgrade action.
Overall: Hard Reset Redux while being enjoyable in short bursts sadly just hasn't aged well. While the graphics do a pretty good job holding there side up, the level layouts and enemies soon become bland and dull, making you tackle them with things like you Katana just so you trick your mind into pretending things have been mixed up a little. If you're still looking for your next fix after DOOM though this might just fill a hole at a cheap price.