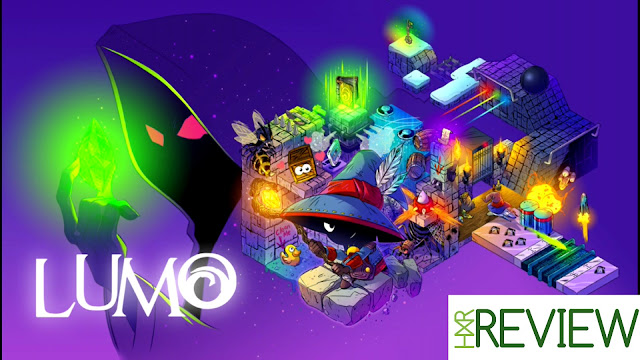 As of late, I appear to be in what could be seen as retro heaven or retro hell, depending on what side of the fence you sit on. In recent weeks I have played a ton of games that all sort of give a tip of the hat or cheeky wink to games that were a big thing when most of us (well maybe not me) were still in nappies. Getting ready to play through my latest review saw me seeing a ton of names of previous games being thrown at me, which in truth worried me a little. Not being a big player of this type of genre before, left me wondering if Lumo was more for the hardcore retro guys out there who loved sticking tapes in machines for half an hour to play a simple game.

Lumo kicks off with your character visiting a retro convention, but as always in game land, something goes wrong. Soon enough you're being sucked into a retro game, slapped into a wizard outfit and sent on your way into 400 levels/rooms over four unique zones. Lumo brings with it a certain charm that you will see you either enjoying it or absolutely hating it after spending a few hours with it. 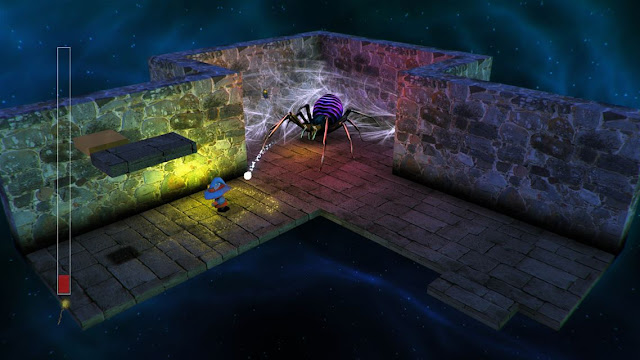 Not being a guy who played many Isometric games in the past, the way I found myself looking at Lumo after playing it for a while was almost like a TV show I loved in my youngers days, and might be one many of you remember. Knightmare was a show I have a ton of fond memories of, and it was my go to show after school, as I settled down in front of the TV with my chips, sausages, and beans for tea. Get a group of friends in a room, give one of them helmet where he/she can't see anything, and have the others boss him around computer generated backdrops as he meets new friends and foes along the way. Lumo is much like that as you walk through room after room not knowing what is going to face you in that next room, well apart from it not having any fire-breathing dragons, or badly voiced bit part actors like Knightmare.

Lumo has a ton of quirks and offers a challenge to almost any type of gamer out there, be it a fan of this genre or not. While the game lacks any sort of deep story when digging deep into it, the game keeps pulling you back in due to the challenge of not willing to be beaten by what looks a simple puzzle. Now while most puzzles are simple throughout the game, there will be a couple that will have you scratching your head and end up driving you mental. These include boxes and switches most of the time. But like I say, other than those ones everything is mainly just doing certain things to unlock new areas. And that's pretty much Lumo all over. The sense of going on an adventure and finding secrets and conquering new puzzles the further you dig into the game. 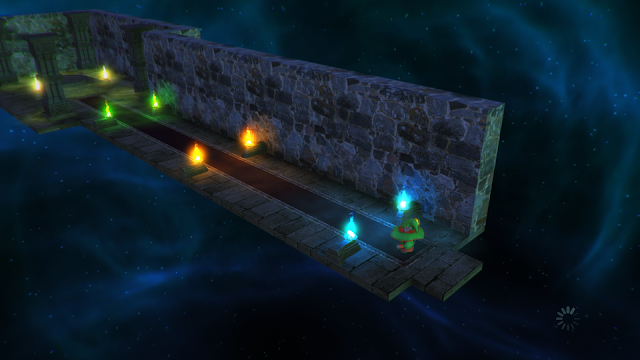 Your character begins the game with nothing, not even the ability to jump that high at all. Over time you soon get a bigger jump and even a shiny wand/torch that not only scares off scary things but also shows hidden platforms to find those collectibles.

The game also has a warp room with a few levels inside of it that when beating unlock a letter as well as an achievement. These cost ten coins to enter when finding these rooms hidden around the game, and if you fail to beat it in the time allotted then you fail and will have to use another 10 coins to go at them again somewhere down the line. I enjoyed these levels a lot, as it broke away from the standard viewpoint the game had through the rest of the game, while also mixing things up a little. And talking of viewpoints, that brings me nicely to where Lumo begins to come crashing down a little.

The only real downside I had with Lumo was the difficulty attached wth the game thanks to the viewpoint it has while playing. This review playthrough has come to a standstill in recent days thanks to a room I'm currently in (see below) just being an utter ballache to actually get through. This wasn't the first time it happened either, as through my time with the game I've also been stuck in rooms that had chains and certain jumps to make, which are only challenging due to the awkward camera angle, not the actual action you need to do to progress. Brushing the first few instances off after taking a break and going back, I think I've finally hit that stage now of Ok, this has stopped being fun now, and is now more me getting angry at myself for not being able to get passed it and complete the game. 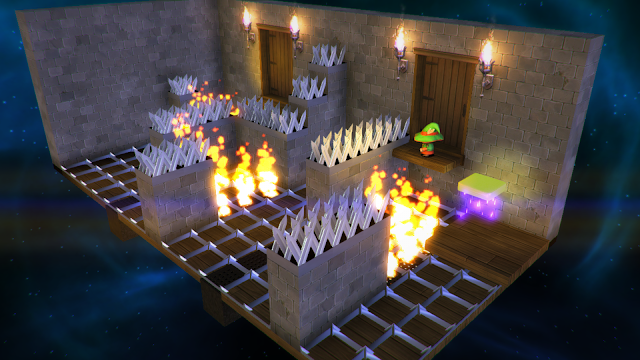 Overall: Lumo is a great little game for those who have been crying out for a game like this on their current console. Other gamers who perhaps have not played many games in this genre will find themselves hating the camera position after a while, as over time it sucks the charm out of what at times is a really fun experience.

Pros:
Great for those who love a challenge
Some decent puzzles
Best elevator music in a video game for a long time (click here to have the tune stuck in your head)