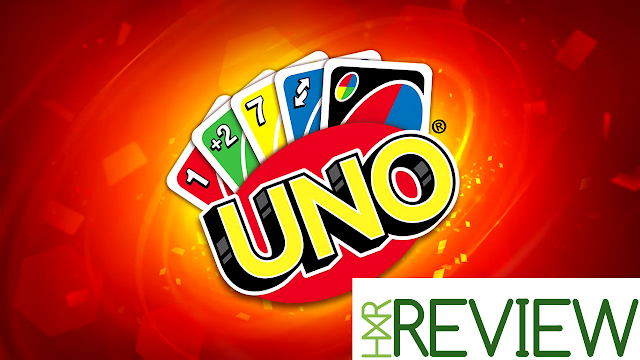 On the night of August 15th, I sat looking at my Xbox One dashboard at around 11.45 (23.45 if you want to be annoying and use a 24-hour clock), waiting for the moment for Uno to unlock and arrive onto my console. Like most of us of a certain age, Uno holds special memories in our time with the 360. Uno on the 360 was where you came to mostly meet the nice people of Xbox Live, but we were all there really to see what weird person we would come across next. Like a Russian roulette or roll of the dice, you just never knew what you was going to get thrown at you as each round would load up. Would you be joined in this simple card game by a normal person like yourself just wanting to enjoy the game, or would you be met with the genitalia of a mad man, shaking it all over your 42-inch plasma screen in full HD without a care in the world. Horrid to even imagine. Add in the safety of playing with friends to witness such horrors though and Uno became a barrel full of laughs on a nightly basis.

When I heard Uno was making its long-awaited return to an Xbox console, part of me did think how were they going to pull this off, while at the same time looking forward to once again being able to jump online with friends to laugh at what shocking things would pop up with present day gamers. Loading up the game at launch I was saddened to see that Ubisoft Chengdu had indeed struck a fatal blow in regards to such tomfoolery taking place, and that's by removing voice/video chat from those outside of your friend list, with those funny random gamers out there who do all the weird stuff not being able to be a part of your game either in voice or video form anymore. *Wipes single tear away* 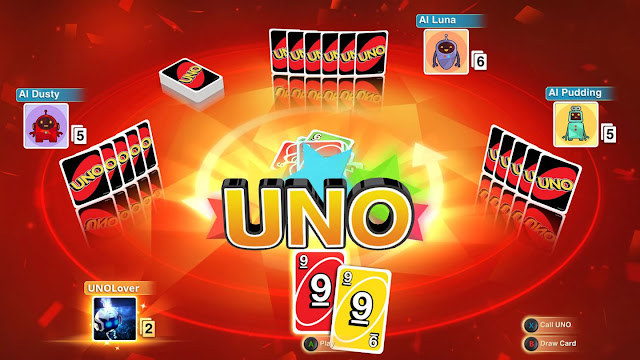 Under the hood Uno is pretty much the same game that you played all that time ago on the 360, with just one themed Rabbids pack being the one thing that mixes things up a little included in this £7.99 download. For those not familiar with the game of Uno, well for starters where the hell have you been? Secondly, I will now try my best to explain it to you.

As a player you are given a bunch of cards at the start of the match, all of which come in one of four colours, and in some cases maybe even some cards that perform a certain action when placing them down. These special cards perform actions such as stopping the next player from having a turn, picking up two cards, or allow you to change the colour of the current playing deck found in the middle of your screen.Your goal is to get rid of all your cards before everyone else, which actually sounds way easier than it is to do so.

The Rabbids-themed pack that comes with this download throws four extra bonus cards in the mix on top of the standard normal pack. After playing with these a few times, I've got to stay I enjoyed it a little more than the standard deck. But while this deck makes the game a bit more frantic and different, it can also make the games drag on for a little too long when mixing in certain rules on top of them. You can see this pack being used in the below video.

While the game of Uno is pretty much how I remember it to be after playing all those years ago, I'm finding myself undecided if I can see myself playing this in massive chunks with the sideshow that was the weird folk jumping in no longer being part of it. Taking away the ability to video and voice chat with randoms takes away the feature that made the game the sociable funny experience it once was, making this current version nothing more than just a card game played with silent people.

I've also had a few experiences of screen freeze when clicking to go to my messages or to see who is online while playing the game, with the game taking 10 or so seconds to unfreeze and let me carry on when it happens While not being a game breaking bug, it can be annoying if you're in the middle of an online game. 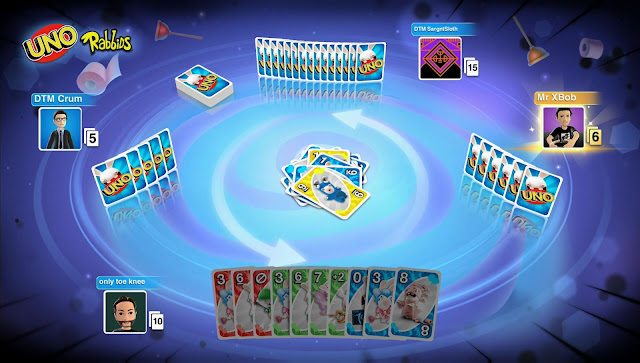 Overall: Other than that guys, there isn't really that much else to talk about in this latest version of Uno. You have offline and online play, medals to earn, XP to earn in online matches, and that's about it. The taking away of the ability to video and voice chat with randoms takes away the feature that made the game the sociable funny experience it once was. Chances are if this was the reason you was buying the game, then you may want to think about it a little before buying it.

Pros:
It's still Uno
Included Rabbids pack does make things feel different
More DLC themed packs will be released (this may sit in the cons section, depending how you feel on DLC)

Cons:
Not being able to see or hear people who are not on your friend list
Still a little glitchy. May need a patch soon
Not really much to it