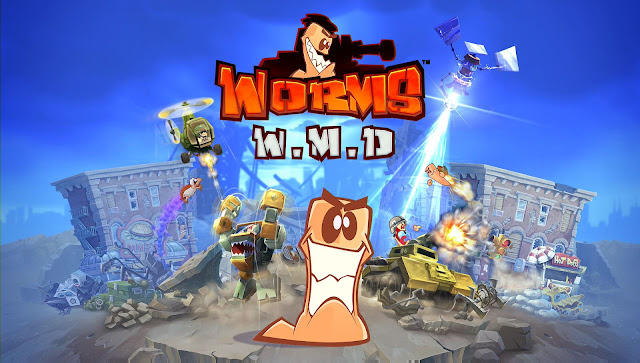 The release of Worms W.M.D on August 23rd, saw the series celebrating its 21st anniversary. Which if we're being honest here is a massive achievement for a series that hasn't really seen that much of a change upon each release. I was hopeful that Worms W.M.D would change all this mind you, as reading up on the game before downloading saw me seeing some brand new things were coming to the game this time around. Before we get to the new things in the game. let's get modes out the way first shall we
.
Worms W.M.D offers both online and offline play via a bunch of modes.

The single player gamer can look forward to tackling a fair few levels, with 20 training levels, 30 campaign levels, 10 challenge levels, and also 10 bonus levels available to you. Of course, some of these require unlocking as you go through the game, as where would the fun be if they were all just available right from the off.

Training is pretty much what it says on the tin, with the mode offering you 20 levels where you can learn to play with both older and new toys that this game now has. This gives a chance for both lovers of the series and new guys to the game a chance to catch up wth everything you will need to know to hopefully gain some victories in both offline and online play.

The Campaign gives you 30 levels of play in which you must not only beat the other team, but also try and beat extra objectives if you wish to gain a full completion for that level These added objectives can be things such as taking out a worm in a certain way, using a certain weapon, having your worms take no damage, and further things to that effect. Do these objectives make each level feel dramatically different to the last? Well, not really, but they do at least allow each level to have a bit of replay value to them.

Challenges, like I said above, offer another 10 levels of play to you, with these levels being unlocked by finding wanted posters in the main campaign. Beating the character found in these levels will unlock a goodie for you to use in the customisations. Not just that, they're also just as fun as anything found in the other modes.

The Bonus levels are the mode where I've kind of come to grinding halt though, as no matter how many times I've loaded one up, I'm still to actually beat one yet. Maybe for the Worms guy who has played every game, this might be different. But just something about the layouts and enemies on hand make this mode a decent challenge for those who fancy taking it on.

Online multiplayer offers the same sort of fun, but in truth is a mode I'm yet to be able to get onto for this review. I've tried about 8 times all at different times in the day to take someone down online, only to be met with the searching opponent screen for up to five minutes, with me then just giving up through boredom. I know from past experiences with Worms games however that it knocks up the fun value even more when playing with randoms or friends, so it's a mode I know once it becomes a little more active it will be great fun to play. Just being this inactive at launch is a worry.

Customisation also plays a massive role as you can see in the below image of my crude worm team  that I created. Playing the game will unlock even more things for you to add onto your created team, but do be careful of what name you choose for them, as yesterday Poop Stars were no more than a simple **** ***** which upset me deeply. 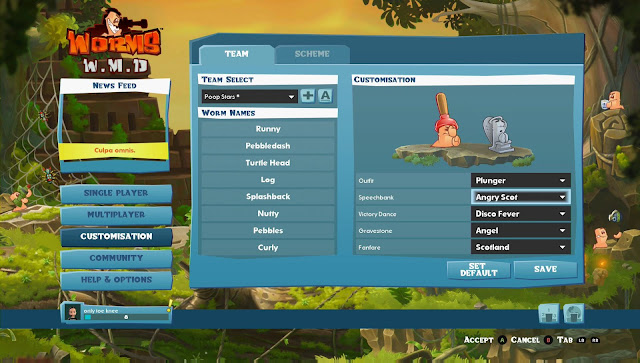 Now the fancy new stuff that Worms W.M.D has to offer, with the likes of crafting weapons, vehicles, and blooming buildings to hide in. Admitally I may be over selling buildings a bit there, but none the less, it's something new added to the game that mixes things up a little

Crafting is perhaps the biggest inclusion into the game, with the ability to craft new weapons with items found in crates on the map, or by taking apart weapons you already have. It just adds another way to play the game, but in truth is something that can also be ignored and forgot about. But do give it a try if you get the game.

Some decent vehicles are available in W.M.D, with a mech, tank, and helicopter showing up in some of the levels you play. All three vechicles while sounding big chunks of metal are all pretty quick yet powerful if getting your hands on them. On top of these vechicles you will also come across weapons mounted into the ground such as a sniper, flame thrower, and machine gun.

Buildings are just that. A great place to take cover if your character is open to an attack after your go is over. I've found they also tend to hide those wanted posters I mentioned earlier, and not forgetting health, and some bits for crafting.

Overall: Adding in all the new stuff on top of what was already a great game, Worms W.M.D just offers those who pick it up a barrel load of fun. Yes, the online is a bit dead. Yes, the game isn't one you would enjoy in great big chunks. But played the right way I'd have to say this may be my favorite Worms game to date.

Pros
Tons of content/levels
Offers a decent challenge
New toys add something to the series, rather than coming across as pointless add-ons