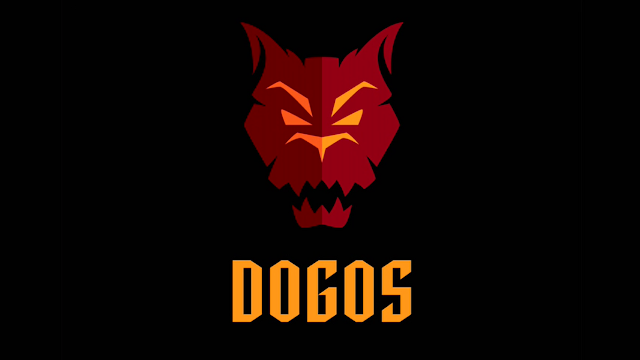 Dogos was a game I knew nothing about up until a kind person on Twitter dropped me a DM pointing me in its direction. Like I said in the last review, the last few weeks for me have been a bit of blur, what with summer holidays and the wife being ill taking up most of my time at the moment. So big thanks to @SteveBurman on Twitter for the kind tap on the shoulder and point in the right direction.

So what's this Dogos game all about then Tony, I hear you cry. Well Dogos is the latest in what is slowly becoming a rare top-down/3D-style shooter that has made its way onto console, with me struggling to think of any others that are available at the moment (I'm sure the Internet will throw a load at me now that I've missed). Shooters such as this was and still are to an extent a genre that is much-loved by many, and this is because us old gamers have played some crackers in our youth. While graphics have changed ,and things now look a lot better in present day gaming, the same backbone to these games has and will never change. Find yourself dumped into some sort of flyable craft, with a story that you will forget all about rather quickly as you blow up anything in sight. 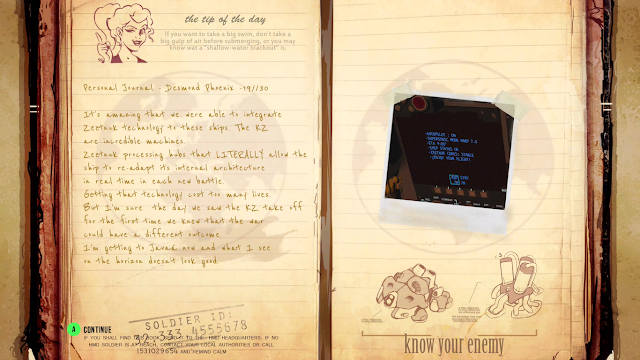 Dogos has one of these things called story too, but digging through the explosions and rockets to find it won't be something that will come easy. In Dogos you take control of a pilot called Desmond Phoenix, a character you will bond with via diary entries and voiceovers while you shoot things. 50 years ago, the earth was invaded by a race that humans dubbed Zeetnuks, with these greedy buggers not only turning the world into nothing but dirt, but they also decided to consume almost every resource on our planet, because why not. While this was all going on humans had put together some human tech with some Zeetnuk tech and a squadron known as Dogos was born. Before these flying machines of death could be used in combat, those sneaky Zeetnuks launched a surprise attack on the base where the prototypes were stored and built, but as luck would have it not before our hero Desmond could get his hands on one of them. Cue previously mentioned blowing up a ton of Zeetnuks and other things in this 14 level campaign. 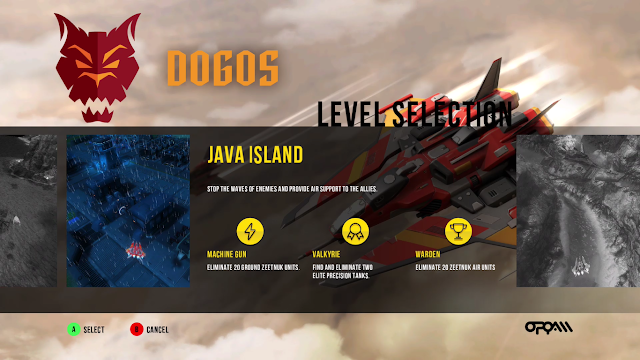 14 levels does sound like a lot in a game, I will give it that. But when you factor in that nothing really changes that much over the time you play it, I did find myself by around level 8 reaching the point of slow boredom, forcing myself to go on to see if things changed. Sure you come across some cool looking bosses as you playthrough it all, but nothing to the point of making this cool looking new boss looking that much different from the one you faced less than 15 minutes before. Each level in the game also has some optional objectives to complete to try and add something new to them, with the standard don't lose a life, destroy this many of a certain enemy, and so on being the ones on offer. Even with all of this and the new weapons you unlock while playing doesn't stop Dogos slowly becoming something you begin to want to load up less and less. Maybe not being that into shooters in my later life is the reason I find myself being so hard on Dogos, as behind the mundane level layout it does everything else rather well. Flying around in a cool looking fighter jet with futuristic weapons was fun for a while, and adding more choice did stop the boredom kicking in much sooner than it did. 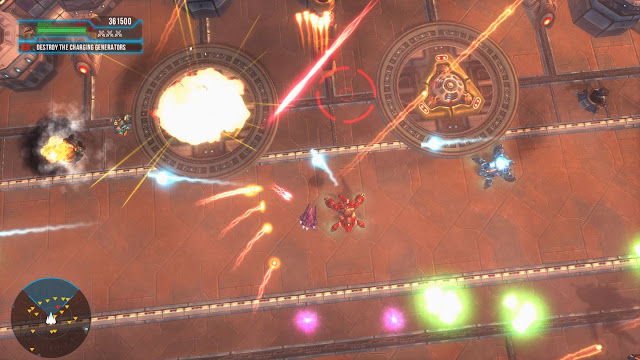 You will find your main weapon in the game by using the RT button, which over time will give you 4 weapons to choose from. You start out with the standard looking blaster, but you can soon change that over to plasma and spitfire bullets, which do cover more of the sky when laying down fire. LT is the button you use to lay waste to ground enemies and was where the game and I had another falling out. I have no idea what genius thought that having to constantly press the  LT button rather than a much more simple constant press would be a good idea This led to me having to repeatedly press the button as ground enemies become more and more an enemy the more the game went on, which led to a left thumb that would ache so much I would at points have to pause the game to give it a break. I have been told that this and a few other things will be fixed in the next patch, so fingers crossed this happens soon.

Overall:
I came out playing Dogos the same way I went into it, which wasn't that bothered with it at all. For those that love a shooter and want one for their Xbox One, then Dogos will more than likely tick all the right boxes. In my case, the thumb pain really did put me off playing this any longer than 15 minutes. Add in the repetitive feel it gave off too, and that pull back a game like this needs to have seemed to drift away even further.