on September 04, 2016
Overdue reviews is a section on the blog where I finally get to play and review a game a while after the game has launched. Chances are you already own it by the time I post these up, so these reviews are purely to get some content up on the blog in these early days, with games I never reviewed elsewhere being the ones I focus on

Last weekend saw me biting the bullet and picking up the guitar version of a game many of us have played over the years, with the latest version of the beloved Rock Band now being part of my collection. The likes of Guitar Hero, DJ Hero, and Rock Band have been a big part of my time spent with the more recent of consoles, with the days of playing air guitar being replaced by whatever plastic devices either Harmonix or Activision decided I needed to use to live out the dream of being a rockstar. I'll be honest, over the years I've preferred the Guitar Hero series of games due to the music in that series being more my cup of tea. That said, I have also dipped in and out of the Rock Band series too. With Rock Band Blitz being a game that saw me spending a stupid amount of money on the DLC for it most recently on the Xbox 360.

The guys at Postabargain made me aware of a deal here in the UK, with Argos selling the guitar and game for just £24.99, or the full band edition available for just £49.99. Both still on offer when this post goes live, so if you want to pick it up for those prices you still can.

The guys at PDP are also bringing out new instruments for the game too, taking over from the Madcatz ones that are currently found in versions of  the game right now. That's you all brought up to date with the game and its future, but what does it offer right now for those picking it up at this fantastic price.
Loading up the game as a single player, I was surprised to see how bare bone basic in regards to modes Rock Band 4 actually was, with career and quick play being your only real choices in the game. While quickplay and things might be good if you've bought the full band edition and have a few local friends at hand, the lack of any online function seems something of an odd choice for what is a party game experience. Sure it's fun in small chunks when you fancy just chilling and listening to some music by yourself, but as a game, it really does lack a little with the online play feature missing from it.

Career sees you making your chosen guy/girl character from a pretty basic amount of options available to you, with clothing and things being unlocked the more you play this mode. You can also call your band whatever you want (within reason of course), and tinker with the other members and make the band the band you dream of in your mind. Once that's done, you find yourself travelling around the world making certain choices along the way, as you play in packed out venues on your quest to becoming the next big group. With the songs at hand though, it's not going to be long until you get out your digital wallet and dip into the huge mass of DLC that the game has for you. You get to vote what songs you play as you go through career you see, so having a decent sized song catalogue will of course stop things getting stale.

On the plus side here, DLC you've bought previously in other Rock Band games has carried over, and to be honest, had it not I would already be finding myself pretty bored with the songs on offer in this version. Because of this, adding to the tracks will be more of a must than a maybe if you want to get the best from the game. Once you buy one DLC song or pack though it will only lead to more, and before you know it you've spent a crap ton of cash on DLC for a game that will only be pulled out when you have company or fancy a change. 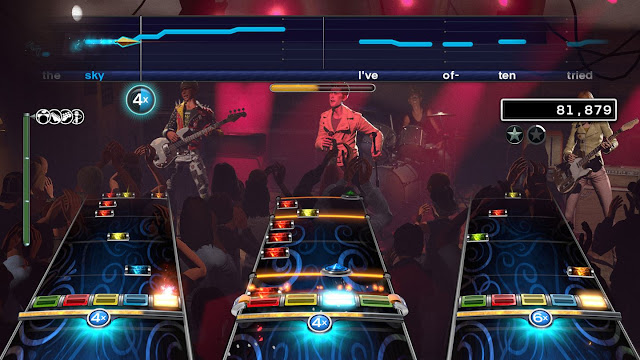 Other modes like Quickplay speak for themselves, with you loading up a song or setlist to just play and try to score well. There is one mode called Brutal which offers a decent challenge to the better players out there. As a novice though I lasted about 30 seconds in a mode that has notes turning invisible the better you play, leaving you to sort of have to play the track through memory. I sucked at it, so really it was of no use to me.

Quick little note on the guitar. It was alright, but nothing special. Had a few instances of it losing the connection with my console mid-song, and also just ignoring my strums when trying to play notes, which caused mild rage let me tell you. Other than that though it's done the job. Nothing different to the normal instruments from other versions previously. 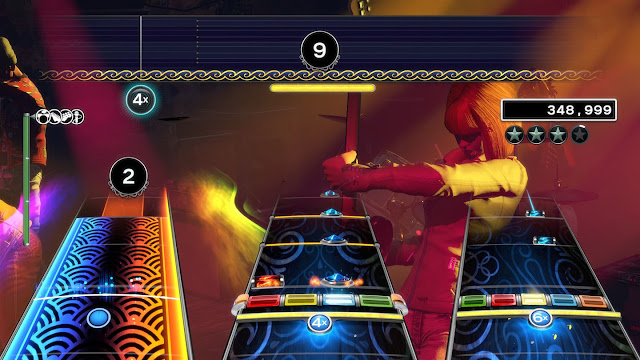 Overall: For under £25.00 this was just about worth a purchase. It's the same old Rock Band, but missing a massive feature in online play that can only be added around with the Rivals expansion later in the year. None the less, I've enjoyed taking a break from shooters and sports games to just sitting down with my headphones and plastic guitar in hand, playing songs I enjoy listening to. It's like loading up Spotify, but with you being part of the process of making the songs sounding like they should. Obviously, a much better purchase if friends/family are around your house on a regular basis.