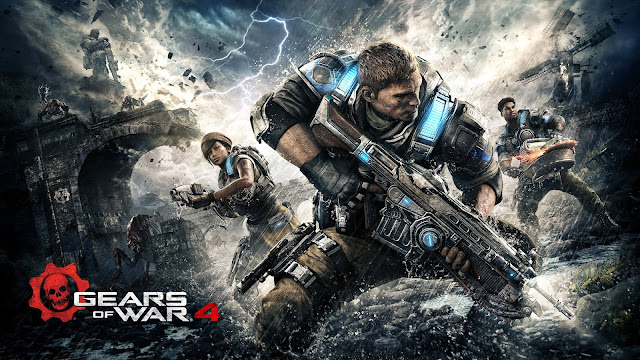 In the next few hours Gears of War 4 shall be getting it's latest update, which will also have some new cards and a couple of brand new maps to play with too. The schedule for this update is sometime around 6pm UK time (10am PDT) this evening, so loading up the game anytime after then should see the update there waiting for you.

This update looks to focus on a bunch of things when it comes to actual tweaks under the hood, with quitters being the people who are set to feel it the most. You can read the full post over here on the Gears forum, with a few highlights from this post found below. The two maps being added are yet to be revealed, with the forum posts being littered with guesses of classic maps returning to the series once again. I will get some gameplay up on the YouTube channel later tonight of these new maps, so be sure to be subbed to the YouTube channel if you want to give them a look.

Combatting Quitters – Phase 1
Combatting quitting has been a top priority for us at the studio. We’ve been working hard since launch to introduce new punitive measures in Gears of War 4 that encourage staying to the end of the match and actively participating in Core and Competitive play.

As of TU3, we’re introducing new features as a first phase of updates to combat quitting in Core / Competitive. As of this update, players who quit a Core or Competitive Match will now be suspended from all matchmaking of any kind for a limited time to discourage drop out behavior – with the biggest time punishments going to the first player to quit the match. In addition, the more you quit, the longer the suspension you will receive from playing matchmaking.

If your connection temporarily dropped or your pet tripped the power cable, all is not lost. Players can rejoin the match they left (provided it’s still in progress) for up to 5 minutes from the time they quit through a new ‘Rejoin Match’ option in the main Versus menu. Rejoining and completing the match will result in no penalties.

With these new features, we hope to see a major improvement in player mentality to committing to a match in Core and Competitive. We have further quit penalty and balanced match features in the works – including Core/Competitive pre-game lobbies – coming in future Title Updates to further improve the online experience.

- Players leaving a Core/Competitive game early will now be suspended from matchmaking
- Players can rejoin a Core/Competitive match within 5 minutes of being dropped or quitting from an option in the main Versus menu
- Rejoining and completing a match will remove the matchmaking suspension time
- Added functionality to display matchmaking suspension time (including to your Squad Leader). You will not be able to matchmake if your Squad contains a suspended user until their suspension has completed.