HXR Overdue Review: The Flame In The Flood

on January 20, 2017
Overdue reviews is a section on the blog where I finally get to play and review a game a while after the game has launched. Chances are you already own it by the time I post these up, so these reviews are done to get some fresh new content on site for games I've not reviewed anywhere else. 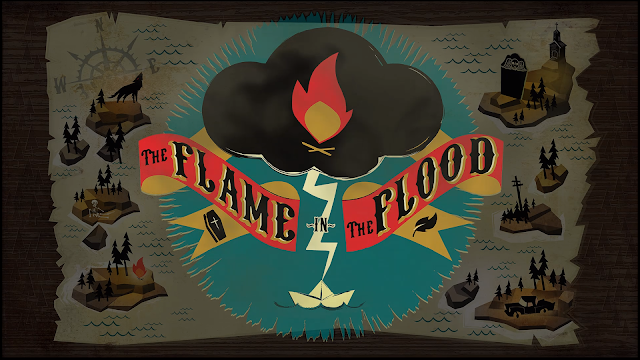 I've told this story many times on Twitter and places I've wrote previously, with The Flame In The Flood being a game I've wanted to play since seeing it on a stream of a UK event called Rezzed a while ago. Truthfully, very rare do I go out and buy a game these days, and that's mostly down to writing on websites and me always having something going on when it comes to reviews. Buying a game when busy just slows things down when it comes to content going up, so adding new bought games into the mix only takes me away from something that I should be playing to something that I just want to be playing. Sure enough big/little games slip through the net from time to time and slow me down, hell even Uno did recently, but with games like this I try my best to stay strong and crack on with what is in front of me, rather than these shiny new things trying to tempt me away.

The Flame In The Flood came out nearly a year ago now, with it seeing a release on the Xbox One in February of 2016. The game also saw a release onto the PS4 a few days back, with those Sony guys getting a complete edition on their consoles. Us guys on the Xbox saw the game added into an Indie bundle package on our store too, which can be found here if you want to pay £8.00 more and get a few more games. 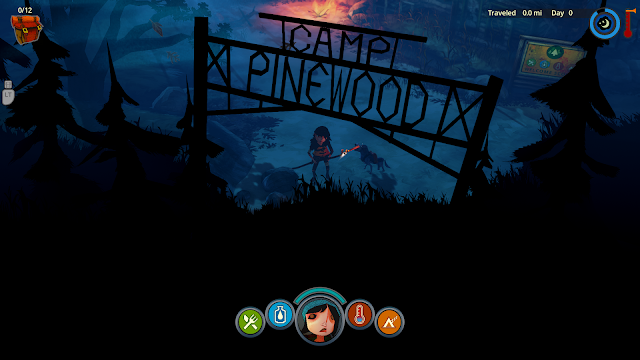 Fast forward to January 2nd of this year, and the kind guys in charge of the Molasses Flood Twitter page were kind enough to send me a DM with a review code for the game after tweeting that I had been dying to give this a look since it launched. So while this review is well, well, wellllllllllll overdue, here's what I thought of The Flame In The Flood.

When seeing the game on that UK stream over 12 months ago, not a lot really went into this brain of mine other than me me being sold on how the game looked. Obviously reading up on the game after it released, I soon found out that while it wasn't going to offer that deep experience I hoped it would, the game itself still had charm and looks to make me still (at some point in time) want to check it out. 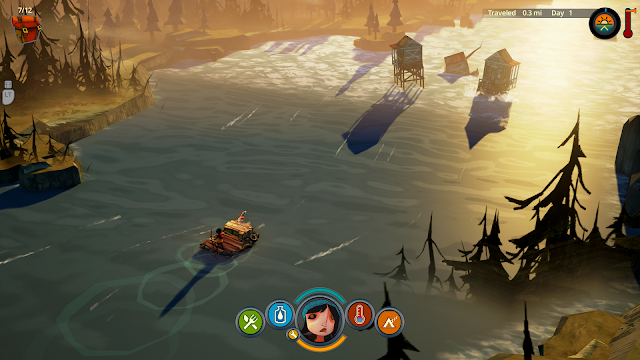 The game is a wilderness survival game in which you control a girl character and her dog down a procedurally-generated river with the goal to survive as long as you can with the things you find and craft. The game kicks off at Camp Pinewood with your dog (Aesop or Daisy) bringing you a bag with a radio inside with a goal of needing to get closer to the signal coming through it to hear the message clearly. You can tackle the game in either a newcomer mode which offers less of a challenge and saves, or you can try survivalist which offers a tougher challenge including things such as permadeath. There is also a endless mode too

The game has a few main things you need to keep topped up on the character you control if you wish to make it as far as you can down the river, with hunger, thirst, temperature, and rest being the 4 main areas to pay attention to when taking Scout down the river and exploring areas which you can dock your raft into. Docking into these areas will see you then take to to land with your dog friend to hunt down food, water, and items, which you can craft into other things with either a fire or coming across a handy workbench if you're lucky. These can be things like clothing or just things to catch food such as snare to catch a rabbit, or even things to improve your raft with, so hunting down stuff is really the goal to the game lasting a long time. The problem is each area doesn't really differ that much from the last area of the same setting you came across, so a church area to rest will pretty much be the same area. This takes away from the excitement of the thought of you find something a little different on your travels, with you docking into a certain area pretty much knowing what to expect after a while. 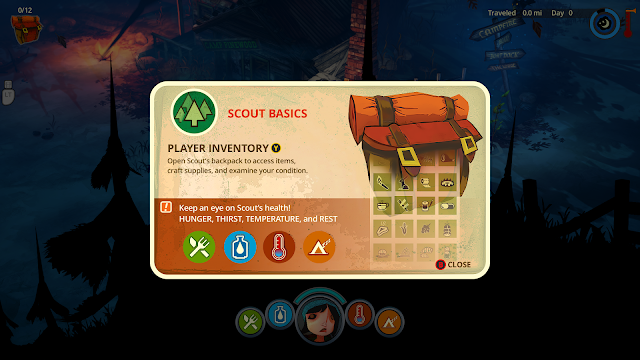 The downside to The Flame in the Flood is I guess that away from surviving it doesn't really have much too it, with me as a player seeing one procedurally-generated river I felt like I pretty saw everything it could offer within a few attempts at the game. I've still found myself coming back and enjoying it, but not to the point of me wanting to spend hours on it trying my best to see how long I could survive for. That's not to say that The Flame in the Flood isn't a good game to kill a bit of time with though, as being in a current gaming funk it has served me well in playing something a bit different than all the big releases that we saw wrapping up the end of 2016.  So yeah, the gameplay itself just comes under the okay in short chunks tagline when it comes to playing the game. The game does have some great audio though, with the music at times being some of the best I've heard in a game in recent times, with it matching the game really well.

Overall: The Flame In The Flood wasn't the game I was hoping for in all honesty, but still did enough to fall into that grey area of a 7/10 if I were to score my reviews. It does a great job of killing a bit of time and being a bit different, with the amount of time it kills being how well you do at the game and survive. The characters in the game lack that feeling of caring about them enough to feel bad upon each death, so not having that connection takes away from the experience a little bit. Great audio and looks okay too. Certainly pick it up if you fancy a change from all the heavy hitters out there at the moment.

Buy the game on the Xbox One store by clicking here.
Indie Game The Flame in the Flood Xbox One