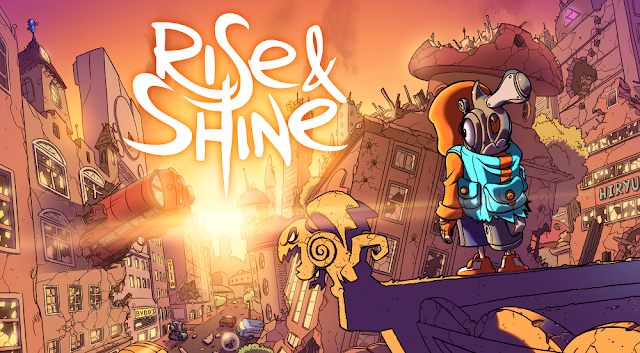 Rise & Shine has already been the toughest review of 2017 for me, but that's not that hard seeing as we are only two weeks into it. I came across the game one day via Twitter, as of late my life is making me miss the smaller releases on the console, and I find myself coming across these games thanks to the lovely people I follow on Twitter.

The thing that attracted me most to wanting to review Rise & Shine was how it looked, with me only finding out it wasn't your average side scrolling shooter once I loaded it up. This review has seen many deaths for me let me tell you, with the Twitter account of the guys behind it sharing the cries of many journalists who dare to ask about an easier setting for the game. While it would have been nice to breeze through each level that I've played so far on an easier setting to just enjoy the story, taking away the difficulty this game has would make it much less of a game, as without that joy of beating a tough area/boss the game would offer nothing different when it comes to just shooting things and walking right on your screen. Rise & Shine is what we in the UK call a Marmite type of game. For those outside of the UK that meaning some will love it while others will absolutely hate it and everything it stands for.

The whole time playing this game for this review I've found myself having a love-hate relationship with it, with me one minute enjoying what it offers, to only find myself seconds later calling it every swear word under the sun, before clicking to the quit game button in a fit of rage promising myself never to load it up again. The people behind Rise & Shine have it billed as a "think and gun game that combines elements of arcade shooters, bullet hells, and puzzle platformers to create a new blend of strategy and viscera" Which in normal none PR talk means a side-scrolling shooter/action adventure that sees you having to think about your plan of attack, rather than just see enemies on the screen and spam to shoot button to clear it. 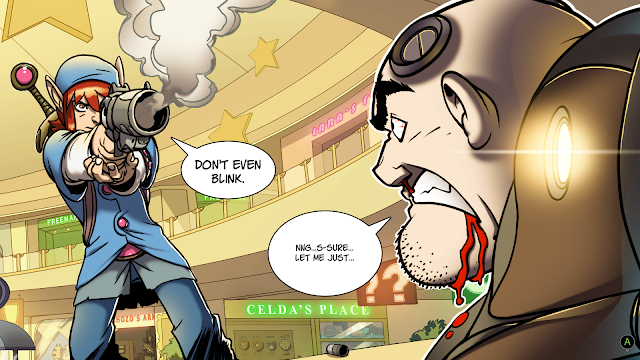 The story itself sees you playing the character Rise, a loveable little guy who is thrust into saving a place known as Gamearth when he is given special gun known as Shine (yep a talking gun, well text talking gun), by a legendary warrior, who certainly has a familiar look about him (see above image). With Gamearth under attack by space grunts from a planet called Nexgen, it's your job to kill these attackers and save Gamearth from coming to a bloody end.

Over time as you work through the story you will find yourself unlocking new things for the gun and yourself, with the gun having multiple ways of shooting, meaning battles don't just involve you simply aiming, killing and moving on to the next section. Like I said above, every boss/area needs some sort of working out on how best to take it on, otherwise you will soon see poor Rise just blown up into small little pieces. The additions to Shine see things like different bullet types and add-ons, with the likes of a controllable bullet that only works in an area that shows on screen as a see-through bubble being one such add-on you unlock early on. These allow puzzles into the game in which you find yourself unlocking switches for doors and so on, making the game more than just a shooter. 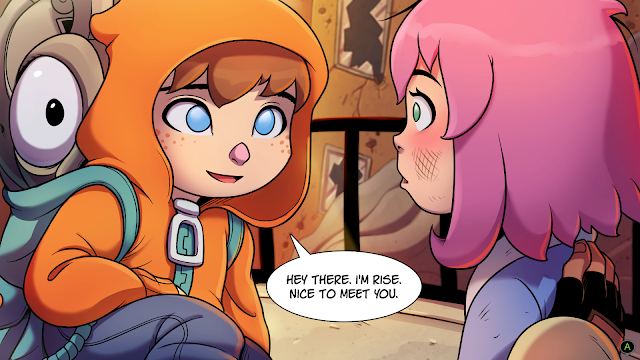 In terms of what attracted me to wanting to play Rise & Shine in the first place (that being how it looked), I'd have to say I've been nothing but impressed with that side of the game. Playing through a cartoon-like-world suits the game really well, and not once did I find myself ever thinking that the game looked horrible in any way. Also, I said at the start of the review that the death count will be high no matter how good or bad you are, so I was pleased to see that the respawning screen to get back into to the game wasn't like some of the loading screens we've seen on games recently, with you back into the action within a few seconds. 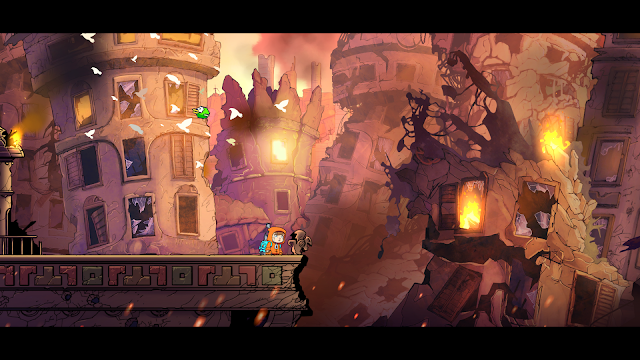 Overall: Rise & Shine while being fun has also at times thrown up times when I have just wanted to remove myself as far away from it as I can before going into a mild fit of rage. It's because of this that the game will not be everyone's cup of tea, with those wanting to just enjoy the story and not being that skilled at the game (like myself) feeling at times that you're getting nowhere with it at all. Those who like a challenge and are good at games such as this will have a blast with it mind you. Looks gorgeous, and the boss battles are great too. Well, once you work out how to take them down and stop dying of course.