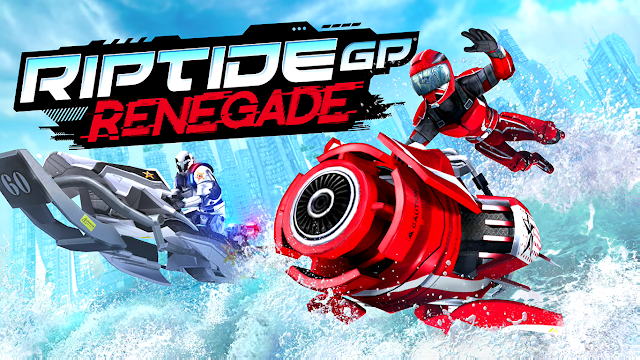 Since around last July, I've been waiting patiently to get my hands on Riptide GP: Renegade from Vector Unit, with the Xbox One release seeing a massive delay while going through its certification with MS. It finally sees a release on the Xbox One on February 24th, with the game offering you both the Xbox One version and Windows 10 version for just £8.39.

I'm a big fan of the previous work of Vector Unit, with their back catalogue of Xbox 360/One games being a big hit in my house. Hydro Thunder Hurricane, Riptide GP 2, and Beach Buggy Racing are games that both myself and the two kids have enjoyed over the years, with Hydro Thunder Hurricane (needs a sequel by the way Vector Unit people) being the place it all began. In truth, Riptide perhaps sits at the bottom of my enjoyment list if I were to judge them all and have to order them, with the review I did for that seeing me not coming out a big fan of it if my memory serves me right (I called it very bland and gave it 1.8 out of 5). Could Renegade improve on this and make me want to keep coming back for more? Read on and see what future me thought of Renegade after spending a bit of time with it. 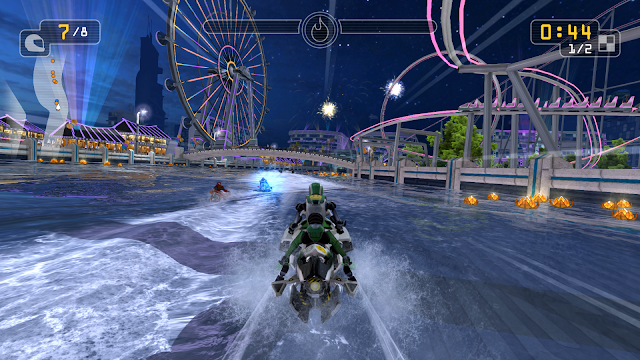 For the first time ever in the series, a Riptide game tries to offer you a single player career with a bit of story to it, with you playing the role of a racer who is banned from racing after taking part in an illegal race. Of course the guy you're racing (a guy called Krex) set it all up for you to get caught by the police after you beat him in a race, with the rest of the career seeing you race and build a crew (read that as unlock new hydrojets and characters to use) before getting to have your revenge on him. All pretty simple stuff, but it does at least make an attempt at trying to be something more than you just doing race after race for no reason whatsoever.

With career, you not only have the story of getting your revenge on the dastardly Krex, but along the way you also find yourself upgrading your hydrojet (a futuristic looking jet ski) and also adding to your character with boosts and new tricks to use via stat points you unlock by ranking up. You can change colours of the rider and hydrojet, and also add a number and decals if you so wish, which you also unlock along the way by completing certain things.

Events in Renegade don't really throw anything new at you sadly, with events such as Race, Slalom, Elimination, Freestyle, and also boss races being the modes you can expect to see while trying to complete it. Much like the events, the same can be said for the other modes available in the game to you, with Career being the one I've found myself using more than these other modes. You have Challenge mode in which you must try to get a good track time for your friends to try and beat for the leaderboards. Quick race (do I really need to explain this?), and also an Online portion which at the moment is a bit quiet due to the game not being available to the public yet. Oh, and also some local split screen play is available. All these modes feel like filler wth the main attraction being the career mode. 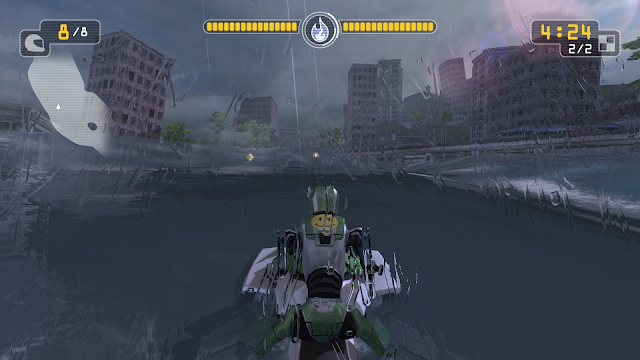 The places where Renegade stand out are with things such as the game just feeling more fun to play and just small improvements on graphics when it comes to previous Riptide games. No, the game won't blow your socks off with how it looks when it comes to playing it. But Vector Unit have done a great job in improving things like track layouts and just things like the water looking much better this time around, making it obvious to see that this is a huge improvement on the previous games.

If I had to have some negative points on the game the one that stands out most would be track count, with just 9 of these available throughout the game. You do find yourself reaching a point of where you do get a little bored with the tracks available, but this may be me due to playing it for long periods to get this review typed up. Also, I do worry about the online portion of the game. I'm adding a section for this in the review when I do actually get to play it, but at the moment I've been unable to get a game with people online (I have tried). Sure, if you have buddies who are picking the game up too this won't be an issue.

Overall: A huge improvement on the previous Riptide game, I can tell this as I find myself playing it daily since I had the code sent to me. I will be adding in the MP portion of the review once the game is out and available, as for now it is dead as can be. Looks and plays really well, just the lack of tracks that let it down a little.
Riptide GP: Renegade