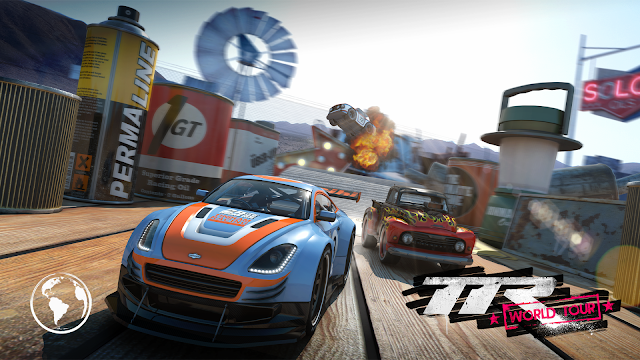 Whenever I review games and the code drops in my email, you tend to know what sort of experience you are in for in how the person you are dealing with sells you the game. You get the PR that just throw you the code with a enjoy slipped into the email, this is the "I'm confident you will like this" approach. The second and worrying way of doing it is when you get PR instantly begin defending the game before you've even had a chance to load the game up. This can be saying something in the email along the lines of "you have to give it a proper go to reveal the quality and depth of gameplay" which happened for this game. Loading up the game and reading that line, Table Top Racing was surely going to be a game that had a deep layer to it that would only be seen when sinking a load of time into it. But nope. Turns out it's just the fun but far from perfect racer I was expecting it to be.

Table Top Racing gives you three modes of play to choose from, but it also has the normal upgrades and car purchases to keep you coming back for more. You have the 12 championships to work through that are littered with numerous modes, with the likes of elimination, combat, pursuit, hot laps, time trials, and basic races being some of the few that spring to mind when thinking back of my time with the game. 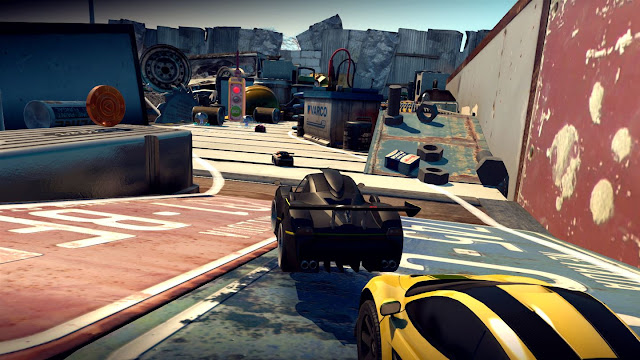 These championships get harder the deeper you get into the game mind you, so this is where the upgrades and new cars come into play, which you can buy with the coins you earn by winning races and championships as you work your way through. These upgrades cover the 4 things you would expect, that being top speed, acceleration, handling and finally armour. You also have a few wheels that you can buy that allow you drift better or have spikes on your wheels to name a couple off, but with these being on the pricey side you will have to win a fair few races before you can add them to your arsenal. You also get double power-ups a bit later into the game too, which allows you double the power of the weapon that you previously picked up. So say you picked up a normal rocket power-up in one of the numerous races that allow it, well pick up a second power-up and it now has multiple rockets. Cover the same logic in all other power-ups and you know what to expect.

Now while championships was indeed a fun little mode to play, it's not a mode that doesn't have its faults. The main one being that you can reach a point where you do feel like you are racing the same track repeatedly, which tries to be sorted with the game having 32 routes in total. As a player that number didn't feel that high to me, as I did find myself feeling like I'd played one certain track way too many times (track called Junk in da trunk) in the first hour or two. Maybe playing it in long bursts for two hours or so is to blame.Who knows. 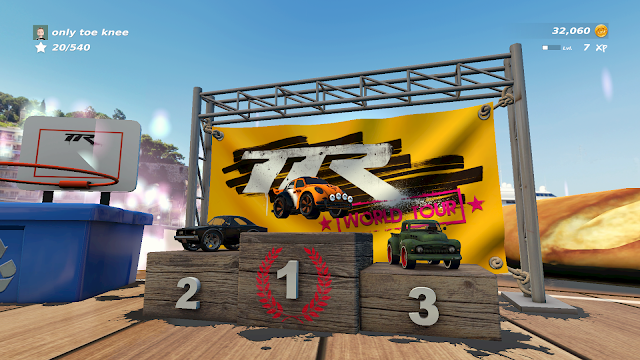 The second fault, and I suppose this can count as an overall feeling on the whole game, and that's the AI of other cars just generally being a bit dickish at times. Now I understand that I am racing for the number 1 spot against these other cars, but when you watch a car literally take a corner in a way that it isn't even trying to go around it but is more interested in taking you out, it can get a little frustrating. I had one race where we was coming up to a right-hand turn with me and another car neck and neck, the car then decided it needed to hit a hard left and clip the front of my car forcing me into a piece of scenery while he got back on the track within seconds and back up to full speed. It's moments like that that make you want to reach for the off button, even more so if it stops you winning one of the final four championship races to win the cup. With no replay race in these cup races, one moment of madness can make three previous races mean nothing when you are trying to win it overall. 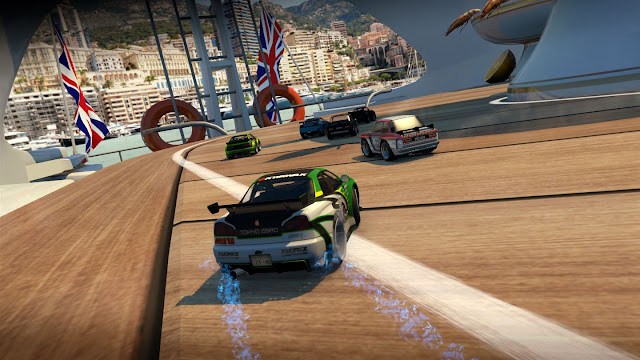 The second mode we have is Special Events, a mix of all tracks and modes in the game, but with all of them requiring either a certain car, wheels and XP level if you want to try and beat them. They feature all the modes I spoke about above, but to be honest, it wasn't a mode I found myself using that much with my time on the game. Championships pretty much covered all bases in giving me everything I wanted, and with this not really offering me anything different just made it a mode that was just there. I guess the one use here is you can use them to collect the 6 supercoins found on each track, with each coin you find you get a decent amount of cash for them. Other than that though, a very throwaway mode for me.

Multiplayer just works as well as you expect, all be it a little quiet even now at launch. All the modes and tracks are there to choose from, and just playing actual people and not the trolling AI can make the game a more fun experience.

Overall: A fun littler racer that offers a fun online and championship mode, while also having a few faults that might be the thing that stop TTR: World Tour being something you find yourself dying to play on a daily basis.
Table Top Racing: World Tour