HXR Blog - One Year Old / Giving back To You Lot (GIVEAWAY)

A year ago today I decided to bring back Honest Xbox Reviews with the hope that people would actually come and read whatever words I typed up on review items that I got my hands on.  Like the little box on the side of the blog has said since this started, I know I'm not the greatest when it comes to forming words into a sentence, but hopefully, my passion and enjoyment of typing comes across in what I do.

I've been doing this now for what feels like forever, with this name being used on a website previously, and then Honest Games Reviews being my writing home. Sure this journey has had its ups and downs over the years, but I still enjoy getting to meet new people on social media and also offering reviews that don't hold back or tiptoe around something being utterly pants because it might end with me being ignored in the future

If you've followed me from day dot (I'm talking HXR first time around) you will know I always try to give back to those who support and read what we/I have done over the years. So knowing the first birthday was coming up I reached out to a few people (and dug a few items out my own collection) and got a few things to give back to those who have visited this little blog and given me monthly numbers that have easily passed my expectations. Sure I'm not massive, but if more than one person visits this blog and reads something, then I will always be here.

So before I slap in the Gleam giveaway to win a bunch of gaming stuff I just wanna say thanks. Thanks for letting a guy who totally sucks at grammar and punctuations to type words on a hobby he loves and you come and read them. Thanks to the guys who have been around on Twitter for what feels like ages. The likes of giveaway whore Mr Sibles. Mr guy who tries to out GIF me all the time (will never happen) SuperNutsy, Even this grumpy Irish guy who looks like Daniel Beddingfield after his recent haircut. You've made this year a lot easier, well making it not me talking to myself for the last 12 months at the very least. Thanks to the PR people who will never read this post as they are busy living the dream of handling massive games and visiting cool places in the world. I did not expect to be able to cover games from the likes of Microsoft, Activision and 2K within the first few months, let alone them answering my emails. 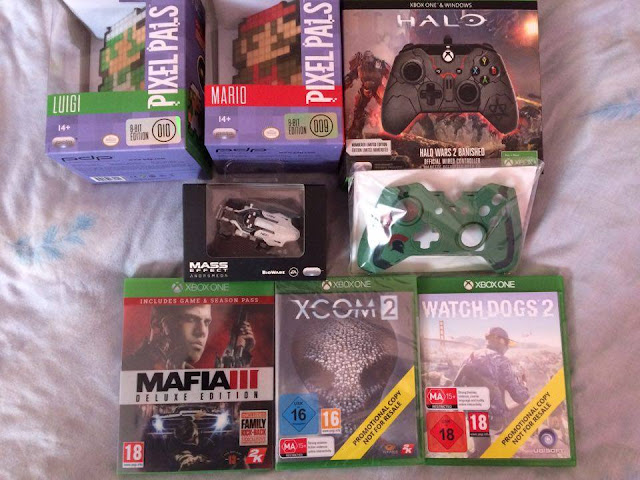 While the bigger giveaway is only open to those in the UK and Ireland (Imagine the postage costs posting this sucker abroad), I do have two sets of codes for both Punch Club and Aaero on the Xbox One, which has now been posted up for you to go and retweet. I know it's not much for you overseas followers, but something is better than nothing right ;) Birthday Gaming Giveaway