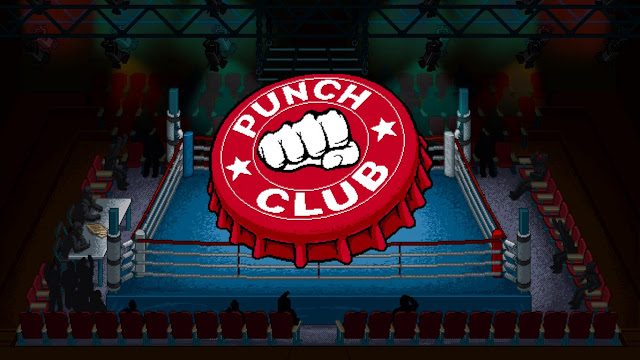 Punch Club is the sort of game I look at wanting to play it, but never go through with the purchase because I know I will suck at it. I remember first seeing Punch Club when it came onto Steam back in 2016, and I think I may have checked out the Twitch stream they did where if the Twitch audience beat the game they would release it early. It just looked cool, and I remember saying to myself back then I must give the game a look when it comes to consoles. Sure enough here we now are with it released the Xbox One, so after putting a few hours in the ring here are my thoughts.

Punch Club falls under a number of genres once you give it a chance, and is certainly worth checking out if you enjoyed games such as the recently released Fallout Shelter on the Xbox One. If you want an actual genre however, well the website calls it a Fighter management sim with RPG and tycoon elements, so let's go with that. 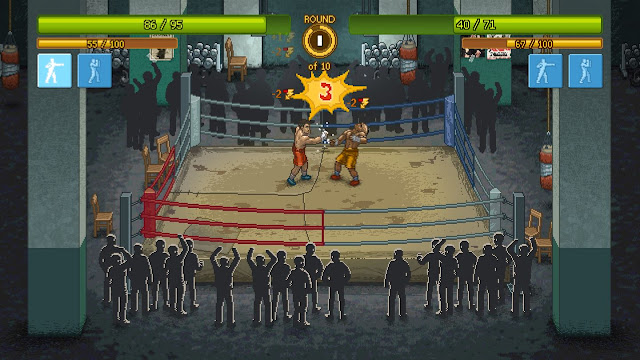 The story of the game starts with you as a child watching your shirtless Dad punch the crap out of some training equipment while giving you a pep talk. Right after you see your father killed by a man in a dark alley. How hard your Dad actually is made clear here shown as even in the death cutscene the crazy fool is still shirtless in this alley as he gets shot, but Dad is just showing his power and how he gives zero shi** about storms and getting pneumonia. None the less, he's now dead, and you must follow on his legacy of being a badass boxer. You wake up in your home (with you now shirtless too) sleeping on your settee/couch and begin your adventure of training to be the world champ and also trying to find out who killed your father. The opening thirty minutes or so sees the game throw a ton of achievements at you, as you meet new people and places that will aid you in becoming the champ and also hard as nails. 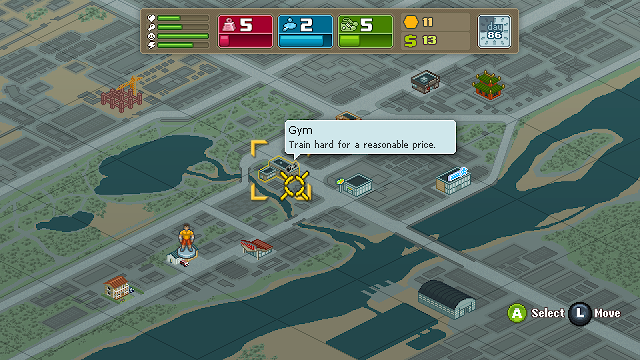 Not only do you have three abilities to worry about with fight day coming up (get to that shortly), you also have a few things to care about on a day to day basis which can be found in the top left-hand corner of your screen. These are standard things such as Health (which takes care of itself really), to things such as hunger, happiness, and tiredness, all of which require you to do things on a daily basis to keep them topped up.

Sleep is just a case of having a quick nap on your settee or drinking an energy drink to boost it back up, but things such as happiness and even more so hunger need you to earn some cash to refill it. Jobs are a key role in the game, with just two jobs available to me at the moment, with those being to deliver pizzas or working on a construction site. Just turn up with time on your hands and earn anything from $30.00 to $50.00 for a days work (not game time). Like I said this will mostly be pumped into buying food to fill your hunger, gym sessions, some quick boosts to fill certain abilities before a fight, to even fixing you up if you suffered an injury in an ultimate fight.

Strength, Agility, and Stamina are the three things you need to work on before any fight if you wish to get anywhere. The game gives you a book early on explaining all this, so the image below is from the first page of the book explaining what working on each attribute will do for you. Saves me typing a bunch of text out to you at least. I found myself going high on both strength and stamina, but even then getting to a point in the boxing leagues where my opponent would have something to easily match what attributes I did have. The fights themselves are just a round by round affair where you must pick moves out from ones you have and see how you do. Not a really interesting few minutes if I'm honest, but this is a sim game not Fight Night from EA. 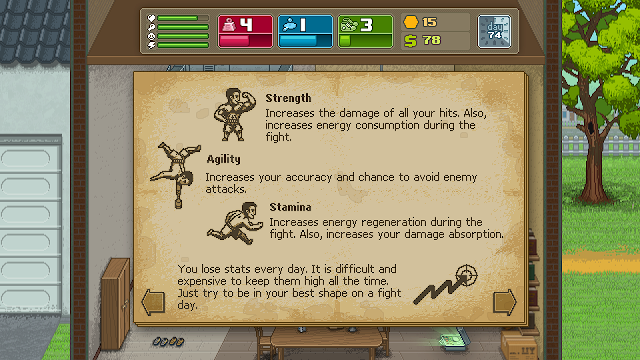 Overall: I'm on the fence after spending a few hours with this game, but I think that's more down to me not really being into this genre of games than the game itself. The guys who eat this sort of thing up will find themselves losing hours in the game, where as people who don't quite pick it up won't feel the need to keep playing it after a few hours, as the game itself can come across quite repetitive. Enjoy this sort of game though and Punch Club is something to at least try.