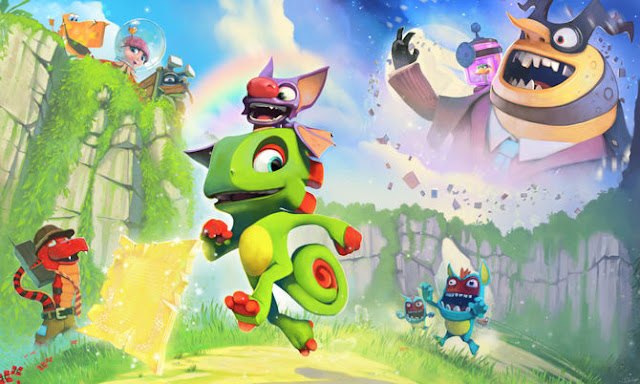 Back in 2015, the Internet went nuts for Yooka-laylee and its Kickstarter project, with the project raising £2.1 million by the time it closed and helped make the dreams of Playtonic become a reality. You only have to look at Kickstarters for games such as Yooka-Laylee and Shenmue to see the chance of a dev team or once loved game series coming back to life seemingly making most gamers throw all their money at their computer screens. I have fond memories of game called Croc back on my PS1, and it's actually because of those memories that I even wanted to give Yooka-Laylee a look. Ask me my feelings on Banjo-Kazooie and you will just get a shrug of the shoulders, as I can't say I've ever been a fan or played the game longer than half an hour in my whole life.

Yooka-Laylee sees you taking control of the duo that is Yooka and Laylee, with Yooka being the green lizard character and Laylee being the Bat that sits on your head. The story goes that evil Capital B (who looks nothing like Gru from Despicable Me by the way) has stolen your 145-page book, and now it's your job to hunt down pages (or pagies as the game calls them) and progress through levels and defeat Mr B and get your book back. This is just a small piece of what the game wants you to do for enjoyment, with collecting things and exploring being the major factor when it comes to Yooka-Laylee. 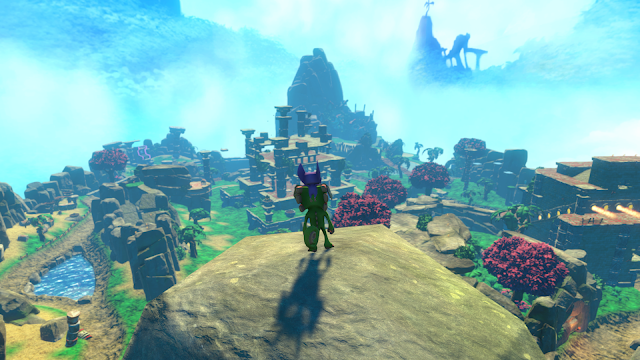 The progression of your character is with you buying upgrades via a character called Trowser, who can be found in all worlds and the hub. The downside and annoyance here is actually finding him or just remembering where he is, what with the game having nothing in the way of a map or compass in sight (which I shall rant about shortly). You need moves to open new areas or to complete certain challenges while on your travels. Take for instance a race you have with a cloud in the first level. Taking this on without one of the many tonics (modifiers you unlock from a giant sponge-like character, which unlock when completing certain goals as you play the game) and you will fail every time. So working out what you need to complete certain tasks is how you will spend most of your time playing.

While it has enough things in the world for you to play, Yooka-Laylee has a few things wrong with it that stop it from being a must-buy game. Numerous things over time began to suck the enjoyment out of the game the longer I played it for. Yooka-Laylee has the look of it being a child-friendly game that will offer many hours of adventuring. But once you get into it, it actually becomes very frustrating, even to me a 36-year-old man who has played the tougher old-school games while growing up. The part where enjoyment started to disappear was not having any real idea where/what I needed to do or go to next to progress with the story. Yes, you collect pagies to open new worlds or enhance ones you already have unlocked, but finding these worlds within the game hub is such a task that you slowly find yourself reaching out for a handy online guide just to work out where to find them. And that's not all, as the most annoying aspect of Yooka for me by a mile has been the sounds used for the voices, with low and high hums being the way characters speak to you while text appears on the bottom of the screen. It's fun and adorable for the first 15 minutes or so, but get two hours in and you dread even meeting a new character, with you hammering the A button on your pad to make it as painless as you can. There isn't even an option to mute them either, so you know every time you play the game that these annoying sounds are going to drive you slowly insane. Then there is the camera that can sometimes make you fall off things or time a jump wrong while it has a mind of its own. So yeah, just many areas where Yooka-Laylee needs a lot of work. 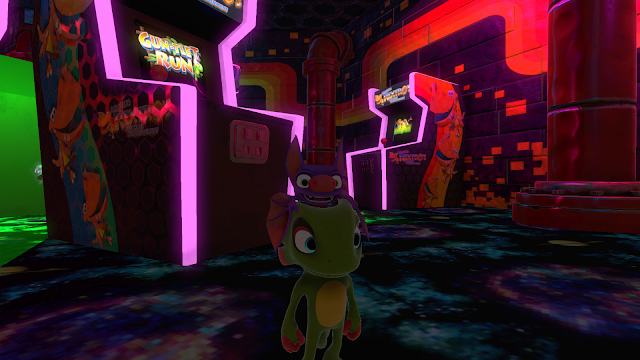 Each world on offer is a pretty decent size to go out and wander around in, and each of them have a set amount of things to find in it too. These are obvious things such as pagies to find and unlock or enhance new worlds, but also things such as quills (in-game currency), hidden ghosts, arcade coins and machines, and also a main boss to take down too. The level also has something called a mollycool in them. Find this and when you return it to another character called Dr Puzz, this allows them to transform you into something that helps you do something on that level. In the case of the level Triblestack Tropics, when returning this mollycool to Dr Puzz she turned me into a plant which let me pollinate and speak to plants. It was fun transforming into something else on the level, but sadly it wasn't used enough and was something that was very short lived and forgotten about very soon. You can see an image below in which I completed most of the things needed to do in the first world, but the shame is that the second world only offered more of the same but in a different setting. You find yourself doing the same thing to complete these worlds, and I'm not one of those gamers who gets enjoyment out repeating the same thing just to say I completed something. 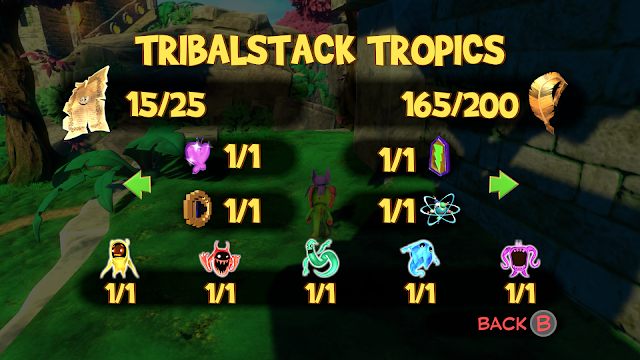 Overall: I expected more from Yooka-Laylee if I'm honest. While it isn't terrible by any means, it just isn't that great either. You will get that retro guy who adores every second on it, but many others will grow bored within the first hour or two of playing it.