The test for me today is to make you guys feel the need to read a review to the very end about a digital lake in a fishing game. Still here? Then I've won half the battle.

Euro Fishing was a game I really enjoyed (and seemingly still do after getting addicted to it again thanks to this DLC) when I reviewed it back in June of Last year. Admittedly since the review went up on the site way back then, my time spent on the game has been somewhat limited what with trying my blooming best to get somewhere with all of this reviewing malarky, but I have found myself going back every now and then for my moment of zen.

This Foundry Dock DLC was a reason for me to get back into the game over the last few days but is the new area really worth the asking price of £8.99/$10.99 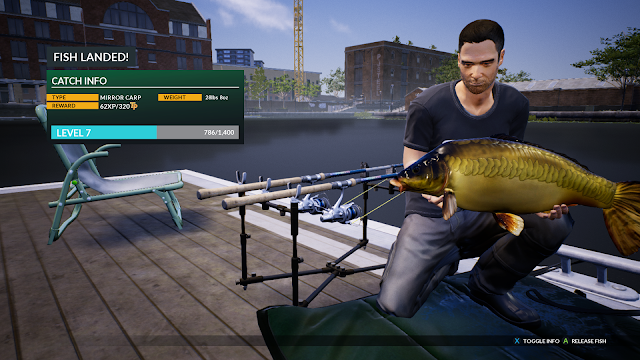 As a fan of the game previously, had I dropped £8.99 I would have been somewhat disappointed as to what I got in return, what with this new area not really having anything new about it over the other areas in the game when it comes to what lies under the murky waters. You're essentially paying for the area and not any new stuff to catch other than 20 new boss fish, with this lake also having the standard Roach, Tench, Bream, and Catfish there to catch too, so the £8.99 asking price does seem a little steep for what you get once you realise that.

While much hype can and has been put on the urban setting that the area is set in, can we really lie to ourselves here and say that it looks top quality? Euro Fishing has never looked top quality, so to sell me an area that looks like something that is set on a back lot of something that I would find in Farming Simulator is pushing it a bit too far if you ask me. Does it reallyyyyyy offer anything different from the previous lakes available in the full game? No, no it doesn't. But there is something there that might make it a decent purchase for those who have lost hours in the game already, as I'm sure by now they are fed up with looking at places such as Presa Del Monte Bravo and ST Johns Lake. The DLC also offers ten new achievements too, so the pull for those guys to come along and buy this for those is there as well.

Overall: Perhaps a little bit too pricey for what you get in return I'm sad to say, with this DLC not really offering anything different over the current set of locations in the game as things stand. Maybe hold off for a DLC sale where you can pick it up for a lot less, or even when the game and DLC bundle is lower than the asking price of £19.99/$24.99

The Foundry Dock DLC on the Xbox One Store can be found by clicking here.
Euro fishing