So many mixed feelings were felt before Destiny 2 had even had the pleasure of meeting my disc tray and being installed onto my console a few days after it launched. The poll I did on release day said it all really, with many of you willing to sit it out and wait for a price drop, after the original game lacked in a few key areas. As expected (as I would have caved too had I not been told my review copy was on the way), one by one I saw followers not able to hold out any longer. Breaking their oath in my Twitter poll with their "I'm happy to wait for a price drop" opinion that some had left less than a day previous, running to their local game shop and picking up a copy. Say what you like about Bungie and Activision, but boy do they know how to market a game well.

This review isn't really for the guys who loved the first Destiny and were happy to go at the series once again. Those guys are now ranked up to the highest level and busy tweeting out Exotic gun pictures on social media all happy and joyful. I'm talking to the other guys and girls. The ones on the fence. The ones who have seen all these kind words for Destiny 2, wondering can it be true? Well, I'm here to tell you yes and no. 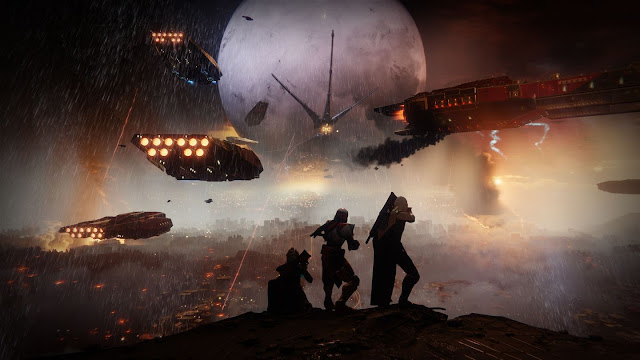 The game does have a story of sorts this time around, so at least we have that finally. If you played the beta you've already met the bad guy this time around, and he is totally not what would happen if a Halo grunt decided the gym life was for him. Dom Ghaul (as I like to call him) is the leader of a group called the Red Legion, kicking off the game (literally) by you falling off the social space of the first game (the Tower), allowing the game to take all that hard-earned loot you had in the first game away from you and start out with nothing. Sounds cool, but the game decides to find a backdoor into giving you your powerful access to light just a couple of missions later, making the remaining missions all about getting to Ghaul and taking him out. It was a fun time, I can't lie. Sure, it doesn't really throw any surprises your way as you work through it, but it was a much better experience than the first one. You have a goal this time around. That's all we wanted. Along the way, you meet some interesting characters who want peace and to kill things too, with trailer star Cayde easily standing out above all of the other you meet, with him being the humourous one.

While the story is much better than the first one, the game itself doesn't really offer that much of a change from the first game. Missions are still the same shoot things and get to the next room experience the first game was, with massive chunks of these missions seeing you able to ignore enemies and move on most of the time if you wish, but who would do that when the offer of XP and shiny loot is being given away. 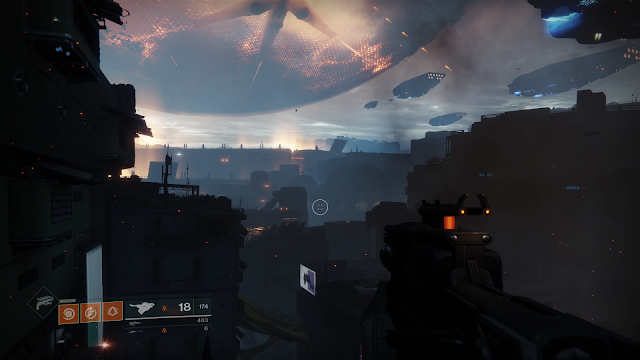 Modes such as Strikes, Patrols, Raids, Challenges, and Public Events all return too, with those also feeling and playing like they did in the first game as well. Adventures are here too, with those slowly becoming more of the same the more time you put into them. All these are all not available from the off though, as to get them you do need to work through the game a little bit to unlock everything

Now to some concerns I had. In Destiny games, we always get huge planets to go out and explore for hidden loot and things, but with your sparrow never far away, that mission or point of interest you fancied checking out was always only a few seconds away. Not in Destiny 2, or at least early on. For some strange reason Destiny 2 decides to hold onto the sparrow like a spoilt child sharing sweets, unlocking way too late in the game, meaning missions and exploring early on are mostly spent with you jogging down many empty and lifeless pathways. Jumping in games with friends and whipping out your cool sparrow to get to the next mission is an even worse experience, as I was always met with a look of "how the hell did you get that" forcing me to jog with them to the next task as I'm not a total online dick.

My other worry is while current quests and things are all new and fun to begin with, how is that public event going to feel after you've shot the same enemy 100 times over? Loading up the game to be told your playing the Base game is just something that doesn't sit right with me either. Surely the better option and wise thing any reviewer should be saying to a gamer who is on a tight budget would be to sit things out and wait a year for the full edition (or as I look at it the full game). It will cost what you are currently going to pay for this base game. 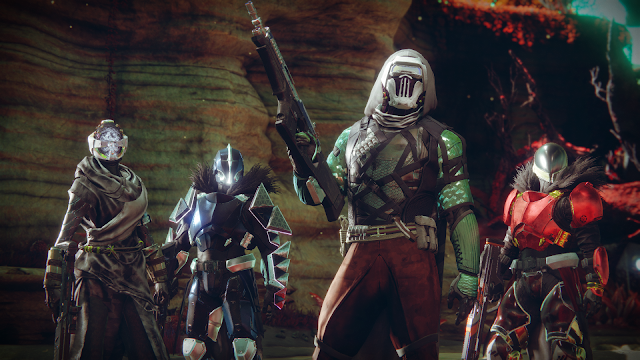 On top of this we, of course, have the handful of online player v player modes for the game, but over time I've found myself stepping away from that too, as it still feels very unbalanced. These modes require teamwork too, but getting that in any current day shooter is impossible. Put these together and it makes this mode an easy one to look over for those who like to drop in and out of such things. Sure you can get some good gear by taking part in it, but when something just stops being fun and more an annoyance, you won't see me hanging around for long.

Overall: While being better than Destiny, Destiny 2 still lacks in the areas that stop it being that game we all hoped from the start. Guys who loved the original until this dropped are of course going to love everything this sequel gives. On the flipside, those who gave up with the original on the 40+ hour mark will more than likely do the same again with this one. Fun, but once again runs out of content
Destiny 2