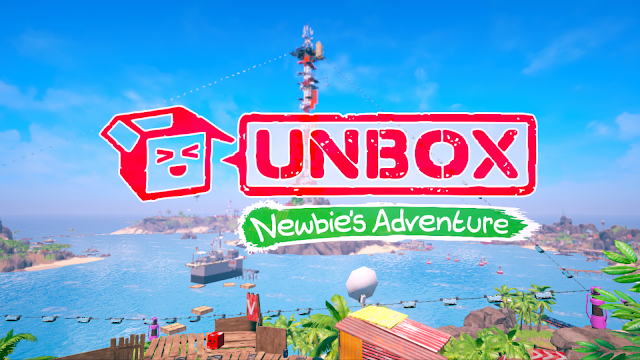 Every now and then I decide that I have enough spare time (I never do, I just lie to myself) on my hands to review a game that might not get that much attention when it comes to bigger review sites out there. I'm one guy, I wish I could review everything, but I just can't. None the less, I saw a game called Unbox: Newbie's Adventure, and with two kids at home, and it looking all cartoony, I thought why not.

In the game, you play a box, which is pretty much the last thing you think of when thinking of the word adventure. Playing this box you must explore the cartoony like world of places such as a base area, Paradise Isles, Parcel Peaks, and Isla Cartulina, completing challenges and hunting down things called stamps. Stamps are the most important thing if you wish to take on the boss for that area, with each boss needing a certain amount of these stamps if you wish to be given the chance to take him out. Characters you find ask you do certain things, with some of these being timed too, but nothing that felt hard to complete, and even if it was it was more down to more how light the feel of character you play is, rather than the mission being tough to beat. Newbie is a box so has that annoying light feel to him where you can miss time a jump, or over press a jump button in a panic. Being square you will also find yourself rolling into areas where you get stuck, and if you've not hit a checkpoint close by, that means going all the way back to respawn wherever that place was to try and get back to where you once were.

While the exploring of each world collecting tape (one of the few side like missions the game has) was enjoyable when playing the game, it wasn't too long until the game began to feel a little stale in what it offered for you to do in all these worlds. Pretty much-seeing everything it had to offer once you had stepped away from the opening base like training area and Paradise Isles. Hoping things would be mixed up a bit when it came to what I had to do with my box, I found myself simply doing the same thing, only this time in a snow-filled world called Parcel Peaks. As of writing this review (Just under 8 hours into playing the game), I feel like I'm at the point of the game where it has given me all it can, as even in new areas I'm doing the same things I did to complete Paradise Isles to move on. I kind of feel like I'm done with this now, so while I was enjoying it to begin with, it now feels like the game just gave up on me, and just expects me to hang it out until the end. 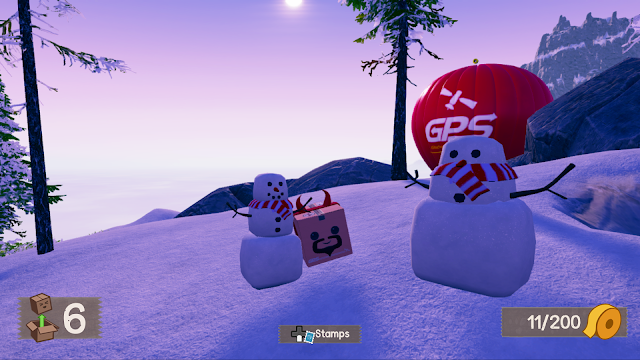 You do have a reason to explore each world like I said earlier, that mostly being gold tape, with each area having like 200 of them to find. You also have caged boxes to find, and a number of hidden stamps to find away from the ones characters give you by completing certain things for them. But like I said, I'm eight hours in now and all these missions and collecting quests all feel the same, making it not as fun as it was two hours in. You will get new items to wear and facial items to customise your box with too, but after a few times doing this you even just stop caring about that.

The game also a local MP mode to play, with a few modes for you to play with three other players, all taking control of your own box. I tried this only once mind you, and that was enough, as I just found them pretty dull. 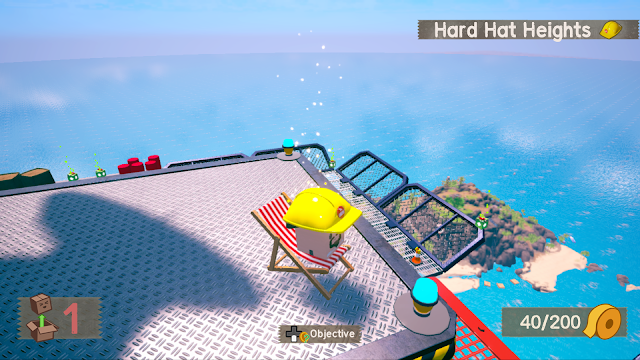 Overall: Unbox: Newbie's Adventure took a while to hook me in, but then once it did and I moved onto the second level, I soon just found myself getting bored of it again. I've not mentioned annoying things like noises used for the voices of characters you meet, or even the music that goes on a loop FOREVERRRRR, as these are things you can turn down, but are annoying if you don't The game itself just feels like it stops trying to entertain you after the first boss is beat, but until that point I did find myself somewhat having fun. If you enjoyed things like Yooka-Laylee then this might be a game to take a look at.
Unbox: Newbie's Adventure