Boy, has my getting reviews out in a quick fashion gone to pot the last few weeks. Life has been a kicking me in the balls the last couple of months, which you would know if you stay in touch with me on social media, with illness hitting and just a few personal things that needed my full attention being some of the reasons even looking at my review pile brought me out in a cold sweat. Shadow of War hit my doormat what feels like ages ago now, and with it came outrage too, with gamers kicking off what I like to call the 'we ain't taking your crap anymore' period we currently find ourselves in. That said, and with the X release now upon us, Shadow of War is always mentioned as one game many buyers of the console were saving for it, so it just goes to show how quick gamers can have a change of heart these days.

I was always going to play this sequel after enjoying Shadow of Mordor a lot. So this outrage was not something that dampened my excitement for Shadow of War at all, with me even going out of my way to avoid trailers and any news on it leading up to the release. Terrible if you like to keep people up to date with upcoming big releases, let me tell you. While I do see while people got annoyed at things like this, I do think the gaming community can sometimes get a little bit mad at something before actually getting to see it all for themselves. With the big press sites more than willing to feed into that worry by doing posts that urge you to give them that site visit they need to stay afloat. During this review I've not spent a single extra penny on the game, with the loot box system only really needing to be a thing if for some odd reason you buy a game you don't intend to play, with the online side of the game not being something I plan to invest much time into if I'm honest with you. The game has already given me 50+ hours in return for something that can be found under £30.00 right now if looking around. Does that offer good value for money? I'll let you be the judge of that. 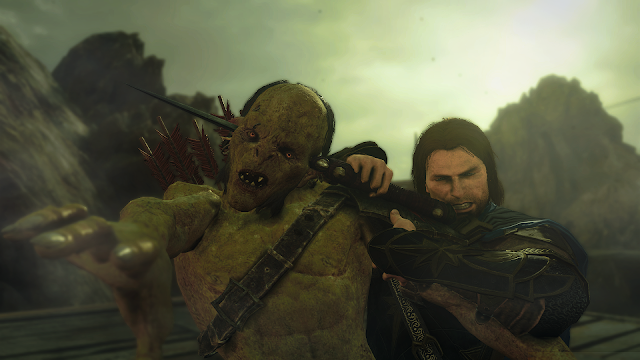 While Shadow of War does have a story playing out involving a ring, Sauron, and a group known as Nazgul (think death eaters from Harry Potter but with metal helmets), I feel this is where I kind of have to start this review to get the bad out the way first.While it will tick the boxes for those who dig deep into all the lore of that surrounding the game, for those who just enjoyed the previous game, and who don't know the all there is to know about it all, you can get a little lost. Certainly, for me, I did find myself kind of giving up with the story about ten hours in, with the pull of side quests and just exploring soon making the game a go kill things in a mission to progress kind of deal. Also, the setup for the game itself and how you play it doesn't make it easy to remind yourself what the hell is going on if you start tackling another quest from a different quest line, or like I say, just start working through the many side things to do. The game can also get a little repetitive because of this as well, with many missions just you getting to an area and taking someone down or rescuing someone. So yeah, personally I've not be blown away by the story side of the game if I'm honest, but I have still had enjoyment with it.

As you work through the game you also grow your character by earning new gear, forging gems for your weapons to give it an added bonus, and also just unlocking new skills to play with. New gear can be got in a number of ways, with the easiest being when you take down one of the characters in the Nemesis system, or even by using currency (Mirian) you earn while playing and buying a crate in the market menu You can also spend real money here if you wish, but it's not needed really if you just play the game like normal. the only time you really need to start spending in-game currency is close to the end of the game when you take on a section of the game called Shadow Wars where you find yourself playing through a few siege missions in which you must defend forts, with cash you've earned being used to give you access to stronger followers to help you defend them. 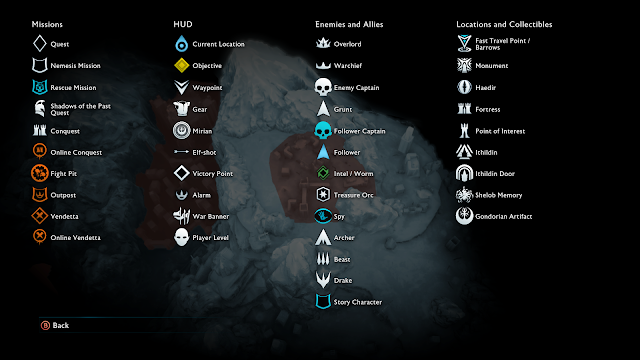 Above is a picture of pretty much everything you will find yourself doing in the game, but like I said earlier, the menu system for this doesn't really make it easy to work out what mission/quest is best to play if you simply want to progress the story of what is going on at that current time. After the opening of the game, while you do unlock new locations, the map itself is pretty much open for you to explore, and with things like nemesis ambushes or you by chance coming across a captain walking about, you do just find yourself getting sidetracked as to what you were meant to be doing in the first place. This can be both and good and a bad thing though.

My favourite side quest in all of Shadow of War would have to have been Web of Fate, a side quest which sees you hunting down jigsaw-like pieces, which then require a little adjusting to unlock a second or so cut-scene that follows. Collecting them all. the game then brings them all together and shows you what they all discovered for you to find out. While it wasn't a hard task by any means, I did find myself enjoying these over some of the other side things that the game throws at you such as fight pits (watching your AI controlled follower duke it out with another enemy), with the game giving you a skill point to use for your troubles. All this got dull really fast for me, which is the reason it sits hardly touched on my game now.

The side quest which sees you having to attack or defend a fortress is another one that many might gravitate to as well, with these not only being a good test of your own skill, but also of the followers around that you've added to your ranks either by loot boxes bought with currency you've earned while playing, or dropping some real cash into them for whatever reason. You can also just dominate captains to join you once this unlocks at a certain point in in the game, with the option to level them up or add training orders to them via the army nemesis screen found in the menus. 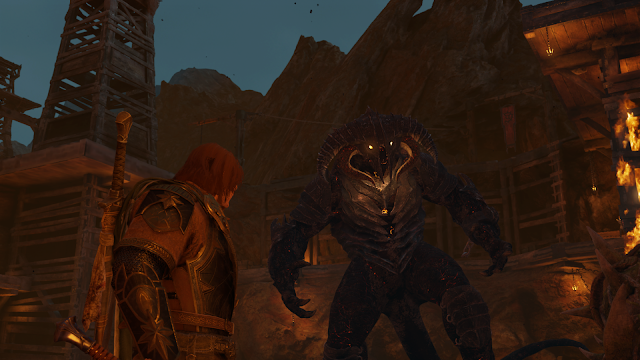 In terms of combat and things, Shadow of War pretty much sticks to what worked so well with the previous game, with the combat being that to games such as Batman and older Assassin's Creed games. It works really well for the game, so to change things up too much would have not been good for the game in my eyes. Buying more perks along the way adds to the moves available to you, with the combat never getting old or stale because of this.

Overall: If you enjoyed Shadow of Mordor, then there is a very high chance you will enjoy what Shadow of War has to offer you. That said, the story itself and the way it's presented is a little bit odd, and you may find yourself getting bored with it if the game was already something you were on the fence about. If you do stick with it though, it is something that will give value for money back, but the online portion of the game that was made such a big deal of never did really sink its claws into me. Playing the main game and side quests were enjoyable, however.