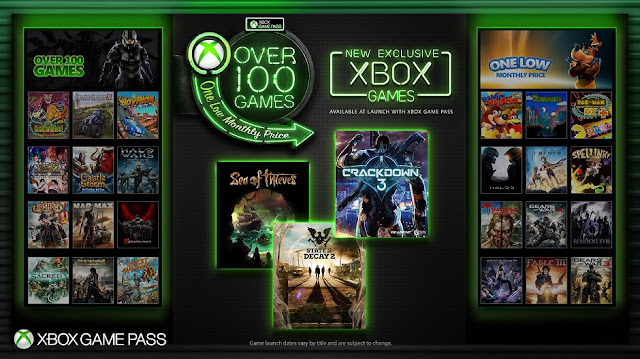 On Tuesday, head of gaming at Xbox, Phil Spencer, shared some great news about Game Pass, the subscription-based service that launched on the console back in June of 2017.

Going forward, Microsoft plans to release games that are both Xbox One exclusive and published by Microsoft Studios onto the Game Pass service the day they launch. What does this mean for the immediate future? Well expect games such as Sea of Thieves (March 30th), State of Decay 2. and Crackdown 3 for now, but MS also teased that loved series such as Halo. Gears of War. and Forza will also do the same when the next games are launched (let's get E3 out the way first shall we).

There have been mixed feelings about this offering on the Internet so far (always the way). I Personally get the value of game pass for anyone getting a new console and wanting to boost their game collection for a set amount of months.But currently (and I'm sure other long-time gamers will feel this way) the service needs to offer way more new titles before it becomes a must buy subscription.

While the service does have big hits like Gears 4 and Halo 5 on it already, the rest are games that only get downloaded to test out and forgotten about instantly. While MS plans to offer their titles, I can't see many other publishers wanting to do the same with recent releases on this service, with the likes of Ubisoft and Activision surely watching how things are going right now and waiting for the right time to drop their own service. We will also get to the point where we start to think enough is enough for a sub based services, as the average gamer is already sitting on Xbox Live Gold, EA Access, and not forgetting the countless movie/sports based streaming services that are used daily on consoles these days. They all add up, and before you know it you can have quite a large sum of money going out of your bank account with these.

What are your thoughts on MS doing this? Are you glad you will get to play Sea Of Thieves this year, or do you plan on sticking with your game rental service that offers exactly the same service but with way more games on offer for around the same price?