What New Games Are Coming To Xbox Game Pass This March? 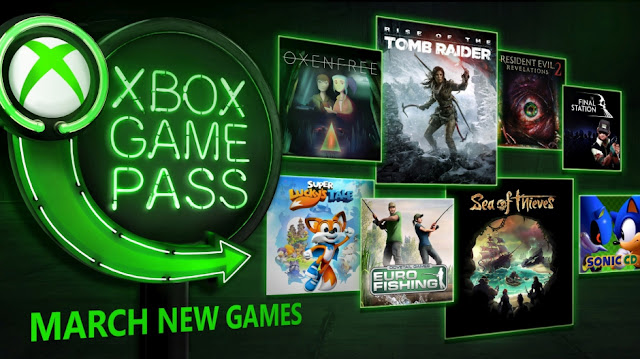 Xbox Game Pass is finally starting to find its feet, with MS recently announcing that all first-party games going forward will join the service at launch, as well as another few new games being added this March for your gaming pleasure. Of course, March is when Sea Of Thieves launches and joins the service, but a few other games will be joining the service this month too.

A decent little selection if you ask me. Of course, Sea Of Thieves coming later in the month is worth the monthly sub alone, but games such as Euro Fishing, Tomb Raider,  and Super Lucky's Tale make March a decent month overall. Of course the service has a load of games for you to try already, and be sure to check out the monthly challenge to earn yourself a prize, as one such giveaway has already seen me receive £5.00 gift from MS just for playing Sherlock Holmes last year, and February seeing the same chance at some sort of mystery gift just for playing Mad Max.