This preview has been a right pain in the bum to type up due to a number of reasons. The main reason was a draft of it going walkabouts earlier today, on top of that it was already perhaps the most boring review I've ever written in terms of trying to make it an entertaining read to date. So read this late at night and you might just feel yourself nodding off due to the game manual like facts I'm about to throw at your face.

Robocraft Infinity came to Xbox Game Pass on April 11th, with multiple versions of the game available if you wanted to pick it up outside of Game Pass, with the Ultimate bundle, and Deluxe bundle also offering the base game you get with game pass but with some building stuff and some cosmetic crates for that extra bit of cash. CRATES FOR MONEY YOU SAY? (alarm bells start going off), fear not as these are more pointless cosmetic crates that give you things like a holoflag or mask to your build. Think skins in Fortnite and you know what I mean. One of those things that people buy as they think it makes their robot look unique but other players never really take much notice as they shoot them down while they wear this piece of pointless junk.

Robocraft Infinity is a 5v5 online shooter which sees you face people online with contraptions you have built either from the easy shortcut mode where you choose from a certain chassis and a few tweaks, or taking hours with blocks and guns to build something as mind-blowing as the image below from the ground up. If you don't possess building skills like me you can always take one of the ready built robots to the battlefield and see how you do (TRex being my personal fave),

In terms of building, the only limit is the CPU of your robot and the pieces you've bought or unlocked via crates that you receive by just playing the game, building, and collecting your daily reward each day. If you get a part in the crate you already have, then the game turns that into robits (Game currency) too. 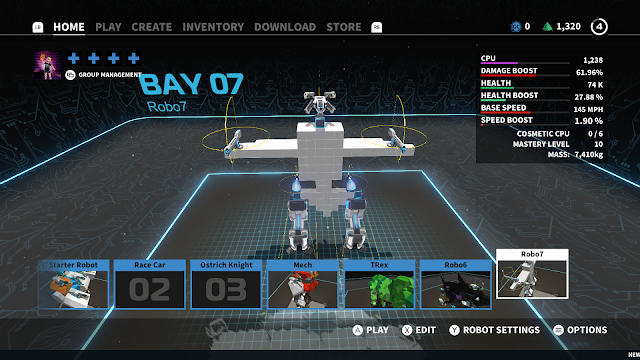 With the game still really early in preview on the One, I can't say I find myself at a time where I think to myself I should load up the game whenever I turn the console on to game. It's super limited at the moment with just two game types (TDM & Battle Arena) to play, with the game just reminding me of something I would see the kids load up in the menus of something like Roblox.

For those that love to build and things, that side might pull you in. But in terms of it being a great online shooter experience, Robocraft has got a long way to go to ever turn me into a daily player who could lose hours on this. Simple things like having to play the whole match as one robot with no option to change after each death also make it something that can become annoying, more so if the other team are just attacking from the air and your team has no retaliation to it. Add on top of it a confusing Galaxy credits system, and a download system which at times requires a stupidly high level of robits to download robots built by other players. Unless you have decent building skills, Roblox Infinity will be easily forgotten about as soon as you built a few robots.
Robocraft Infinity