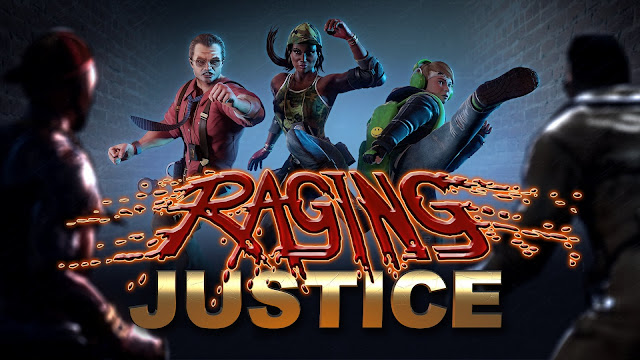 Growing up, I would say the first proper gaming console that I fell in love with was my Mega Drive, with the Xmas day I got given it ranking right up as the best days ever. While I played all the other consoles both older and newer as time went on, the Mega Drive for me is the console that I tend to have more memories of when thinking back to how good my childhood was when it comes to games. If you're of my era of gamers, games like Golden Axe, Streets of Rage, hell even Altered Beast, were big games for me back then, maybe not in looks when going back to them now, but just games that have long stuck with me the older I get. It's been a while since I've really dug into a side-scrolling beat-em-up again, with Raging Justice trying it's very best to capture just some of the fun like some of the games mentioned above (I know all you guys have your own). But how did it do?

Raging Justice is basically nine levels of side-scrolling, button mashing fun, which sees you on a quest to return order to the streets of Makin, and also save the mayor who has been taken hostage.......maybe. The story is there, but really the game is just you taking on these levels trying to survive to the end of the game to take out the main boss, which if you played the games I mentioned above, you know how these games play out. The story can be finished pretty quickly if playing on easy, but with normal and tough guy mode (hard) also available in terms of difficulty, the game can offer a right challenge for such a simple concept.

While Raging Justice doesn't steer too far away from the simple way of playing from older games in the genre, it does try it's very best to also be a little modern too, with the game offering both challenges and arrest warrants on each of the levels. This can stop the game being the punch and kick smashathon that these games tend to be, and sort of offers a different way of taking on the game, while also making it a little harder to beat all levels. I've included a screenshot below of the standard challenges you can expect to find on each level, with no real surprises as you can see, with the likes of finishing a level in a certain time, or just using a certain weapon on an enemy being just a few of them you will have to try and beat if you want all the achievement points from the game. 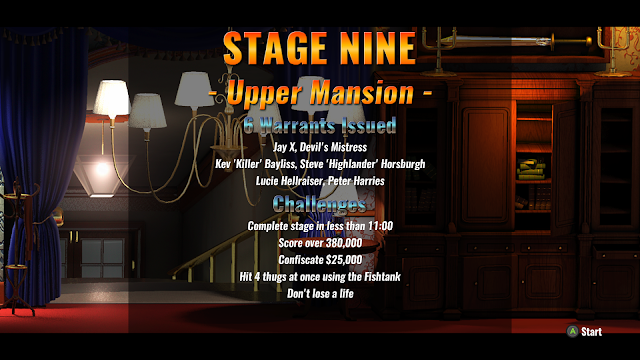 In terms of the warrants, these are characters you can either arrest or knockout with a weapon, giving you a good cop/bad cop rating for doing so, also linked with another achievement you can earn from the game. Sadly this is where the game loses some of the good it did offer, with arresting people being a task way more difficult than it should be. Getting them to a stunned state and trying to press B to complete the process can sometimes be so frustrating, more so when the screen is full of enemies (I'm looking at you women with stun guns and fat running blokes). It needed to be something a lot easier to complete, as I've lost count how many times I've accidentally kicked one of them to death when trying to reach them across a screen filled with enemies all trying to punch or stab me to death. The combat system itself is what lets it all down, that and just the AI is much better than that of what we would have seen in games in the genre a while back. Back then they were sort of dumb as a box of bricks so you could plan attacks much easier. With Raging Justice these guys just swarm you and will not stop at taking as many cheap shots as possible to keep your character on the floor. While the basic combat works well (jump, kick, punch. a unique special move for each character by pressing Y+B), the dash and avoid button have a habit of just not wanting to work when using the analog stick, making play using the d-pad something I would certainly suggest. The campaign can be played in local co-op mind you, so all of this might be a tad easier if you have a player 2 for back up. Sadly getting the kids to come off Roblox and Fortnite these days for a genre that Dad enjoyed back when he was a kid is never going to happen, so without online play, I was left to fight the game alone.

The game also has one more mode for you to play, with Brawl mode being a wave-based affair in which your goal is simply to stay alive and get as far as you can to score well for the online leaderboards. Not something I found myself that interested in, to be honest. Very much a take a look at it and forget it was there five minutes later mode. 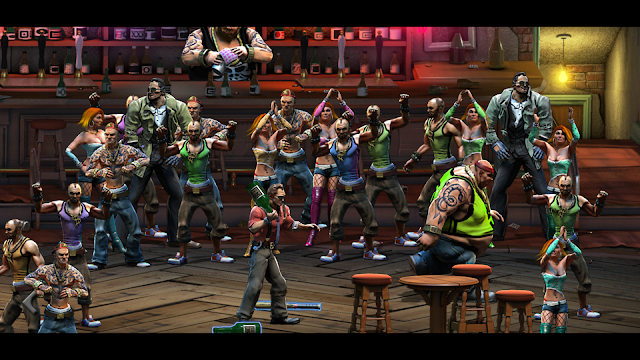 Overall: The first few hours of Raging Justice were fun, but soon the little things that needed fixing or improving soon started showing their ugly head. Combat was the biggest killer for me, with it trying to offer an old-school feel against AI that has obviously improved over their older, more dumber henchmen brothers and sisters. It captures both the looks and sound of the games we loved back in the day really well, but with the short experience and leaderboards being the only real pullback to it all, this will be a very short-lived experience and one you will have forgotten about by the end of the week.