Trailer: Stay (Coming To Xbox One May 30th) 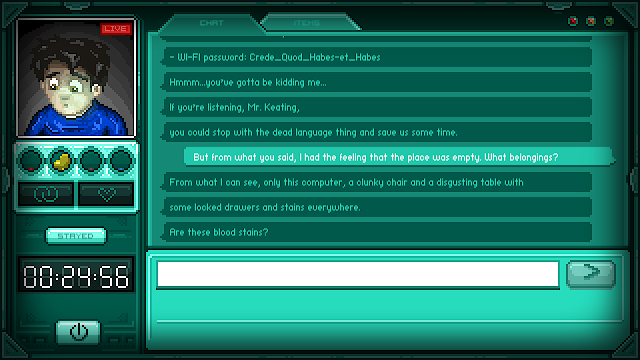 Just had this trailer drop into to my emails and thought I should share it on here. STAY is a number of things if the press release is to be believed, with the number of things it supposedly offers making it a right mixed bag.

The game sees you play out the story of Quinn, a therapist who wakes up alone and locked in a strange room with nothing but a computer hooked up to an internet chat room, with the only other person in that chat room being you, and the story playing out with the choices you make when trying to help Quinn escape and just survive the loneliness.

The one cool feature I noted in the bullet points of the press release that made me interested, was that the game plays out in real time, meaning that every minute spent away from the game is a minute Quinn is left alone. Leaving Quinn to fend for himself for too long, then, of course, there may be consequences to your actions for doing so. It just seems like a cool concept, but of course, it depends on how well the game plays that out too. Check out the bullet points and trailer below.


Raise your empathy
Quinn is on edge, and every response matters. Prove yourself a compassionate ally and he'll learn to trust you and share both his findings and deepest thoughts. Fail, and his emotions may work against you.

Uncover the truth
Webcams around the environment and on the computer enable you to watch and analyse Quinn's reactions, mental state, and actions while he is Away From Keyboard. Pick up on his lies, use that knowledge to your advantage and uncover the truth at the heart of STAY.

Solve mind-bending puzzles
Help Quinn get the better of the conundrums he encounters inside his prison by taking direct control of his actions during numerous puzzle sections.