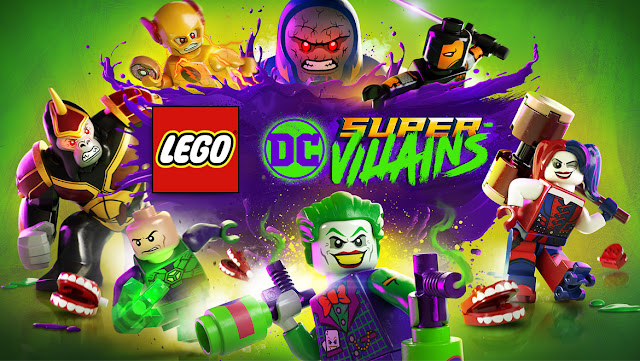 So it's that time again, the latest installment of the Lego franchise is upon us, and this time we are returning to the DC universe. Before we start though, I do need to confess that I do have a love/hate relationship with the LEGO game formula. Playing Star Wars, Indiana Jones, Batman and the Marvel games, with later titles that have released kinda just being ignored by me, with some of the newer releases either not being a huge fan of the related franchise, or I just knew what I'd be getting and wanted something different. I felt the formula had grown a little stale and predictable. This one, however, DID interest me. Mostly because A, I really do love my comic book characters, and B, this one is called DC Super Villains..That's right kiddies, this time around we play as the baddies!

Now, I'm not going to lie, this IS obviously still a Lego game, and you probably know what that's going to entail if you've played any previous games. Just in case though, this is what you can expect. You will play through the story, unlocking new characters with new abilities, which will allow you to destroy and manipulate more things in the levels, and the overworld. Your goal is basically a collectathon, you'll accumulate studs, solve puzzles and collect Gold Bricks, Red bricks, MiniKits, and Vehicles as you try to get that all important 100% completion. 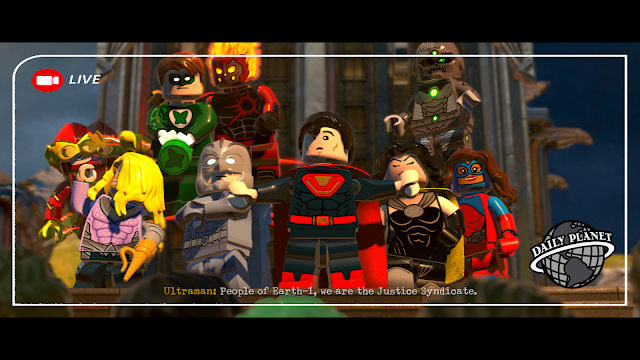 The story is really just an excuse to bring in as many characters and locations as they can, but it's still done well and is filled with all the charm and humour that the franchise is noted for. I don't want to give spoilers away, so this is the intro to first level stuff. We begin our playthrough by creating a custom character. The options here are surprisingly deep, with more unlocking as you play through the story. You can customise almost every single element including body pieces, weapons and accessories, as well as the visual style of your powers. This custom character, a new version of the power-mimicking android "Amazo", is in the custody of Commissioner Gordon and is being taken to Stryker Island for examination by the imprisoned Lex Luthor. Lex uses this opportunity to his advantage and stages a breakout, releasing many other villains as he does so. Meanwhile, in Gotham City, Joker and Harley are staging a break-in at Wayne Industries. Their plan? Stealing back all the confiscated villain tech which has been sent here for storage. The two escaping sides quickly collide and draw the attention of the entire Justice League. Just as our heroes seem to be dealing with the problem, they are surprised by the sudden appearance of the "Justice Syndicate" of Earth 3. At first these familiar but different "heroes" seem to help, but quickly turn on our good guys, whisking them away through a portal to an unknown location. The "Justice Syndicate" then set themselves up as the new defenders of Earth 1, taking the place of the "missing" Justice League. The Villains begin to realise that these new "heroes" aren't all they appear to be and decide to unite, bringing their powers together to foil the plans of these Earth-3 imposters.

The game itself is quite pretty, everything looks great and is done with that instantly recognisable Lego style. The in-game "Photo mode" can show this off particularly well, with cutesy selfies and pretty photos easily possible with only a simple button press. Every level is beautifully detailed, has full voice acting and brilliantly done cut-scenes, with every character being full of the personality and charm saw in the previous games and movies. Uncovering Lego versions of your favourite characters is part of the fun of these titles and all the usual fan service is present and correct, with references to the DC universe sprinkled throughout the entire game. 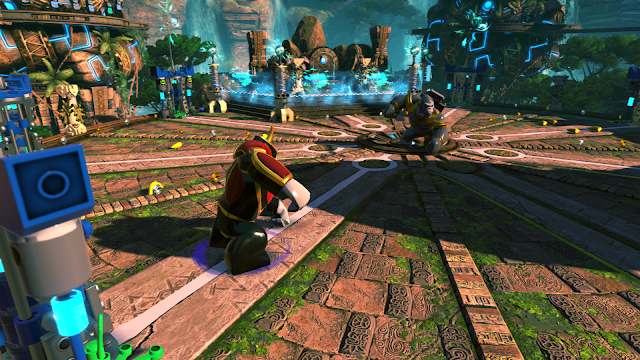 Now, the Lego games have a tried and tested formula to them and this one is no different. The entire game can be played solo, but is also really fun when using the drop-in/drop-out co-op feature. This can be a good way to introduce youngsters to gaming, as death isn't punished and you can help them along with any tricky bits. Each level is played through once in story mode and is basically your main campaign. At first, you can only play these levels with the "Story" characters, meaning you won't be able to 100% a level in one go. However, completion will unlock a "Free Play" mode, allowing you to go back with every character in your roster. You can then use their powers to get anything you missed the first time around.

Speaking of the character roster, it is huge. The pool of characters starts relatively small but quickly expands to include almost every fan favorite you can imagine. We have the biggies like Lex, Joker, Scarecrow, and also more obscure characters like Cheetah, Chang Tzu, and Mirror Master. Although the story is focused on the villains, you'll meet and unlock many heroes too, with their tokens slowly appearing on your available character list. Most of these are unlocked through playing the story, some through side-quests, while others are found by obtaining their tokens while exploring the overworlds. These overworlds are basically a world hub and they connect all the story levels and areas together. These maps are relatively big, and while not up to GTA levels or anything, the Earth hub contains scaled-down versions of both Gotham and Metropolis. As the game continues, a hub for Apokolips, home of Darkseid, also opens up, introducing a new area to explore. Each location has all the landmarks you'd expect, and you can explore them at your leisure. All your favorites like Wayne Island, the Daily Planet, the Smallville water tower and many more, are all recreated in that trademark Lego style. As you explore these overworlds you'll discover sidequests, races, and puzzles a plenty. Solving these will be your main distraction, other than the story, and will be the main way to unlock all your various collectibles. Each little district also a challenge associated with it. These are instantly reminiscent of the Riddler missions in the Arkhamverse games, they give a little clue with which to find the related object. These vary from location to location but can be things like finding bats on Wayne Island, destroying the Penguin cams belonging to Cobblepot, smashing all the phone booths in Metropolis or even stealing candy from babies! 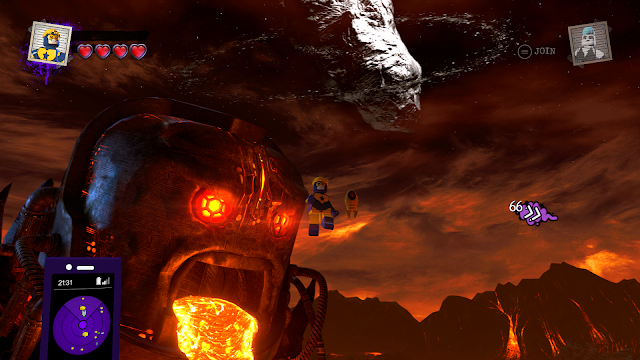 Controls-wise, things are basic but functional. Combat flows easily and combos link together with a single button press. Every character also has an ability that works with the "B" button, making skills easy to use and consistent across every character. The only control problem I found was a perennial one for Lego games. The flight controls. Using up and down on the right joystick to control your height can be a problem because it takes over the camera, meaning you can't pan it to see above and below you. It's a minor niggle but was a little annoying during the flying races.

So, a basic summary is that you can expect a good, but formulaic addition to the Lego franchise, with a charming campaign that's packed with side quests and puzzles. Exploring the world is a pleasure and there is an obvious love for the source material. However, it's still a Lego game, and unfortunately, it doesn't ever really break out of their established mould. If you're expecting an amazing and innovative experience, you probably won't get that, especially if you're already familiar with the Lego franchise. While a very decent game, one that's fun to play and has great fan service, it, unfortunately, doesn't do anything new. If you just want more of the Lego style though, and you like the DC comics, then it's worth your time to take a look, especially if you want something to play with the kids that you can enjoy too.