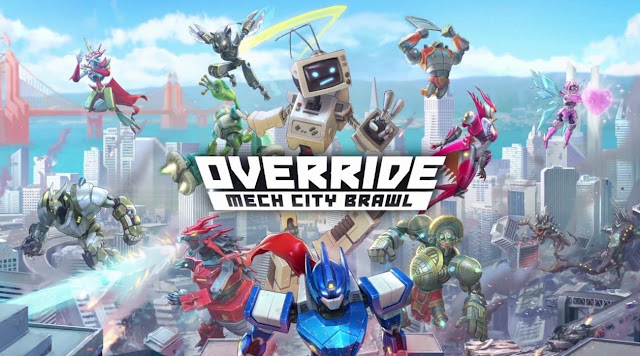 Okay now, full disclosure situation. I was already interested in this one before it's release, so I was chuffed when Tone asked me to çover it. You see, although I'm not usually a big lover of fighting games, I think the last one I played solidly was Mortal Kombat 2, the concept for this one really caught my eye and got me interested. Giant mechs are a cool subject, no matter how you cut it. And movies like Transformers and Pacific Rim have really brought the concept firmly into the mainstream imagination.

So, let's see what we have, shall we? The description from the game's website seems a good place to start, as it does a nice job of letting us know want we're gonna get.


No gears, no glory! Control gigantic fighting robots and duke it out across fantastic cityscapes in this 3D mech-based brawler!


Epic and explosive battles await with anime-inspired mechs in local and online versus game modes, party co-op with 2 to 4 players, and a single-player campaign"

So it's an easy concept to grasp, and it's also one that's reasonably well executed. This lends itself to the party game feel of the fights, it's easy to explain, pick up and get into. Four skyscraper-sized machines smashing through the city, leaving a smoking ruin at the end, is extremely satisfying and gets MUCH more fun when friends are added to the mix. 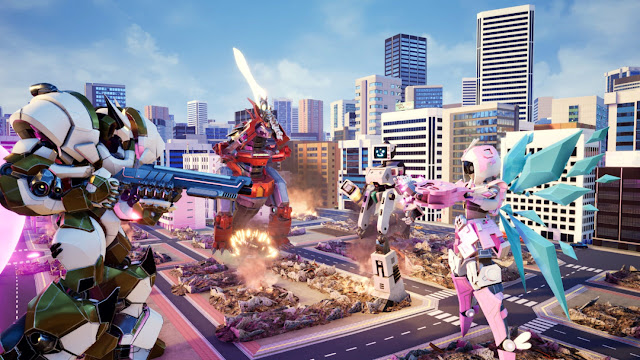 A small tutorial section is available to teach you the basics and, though simple and easy to pick up, the mechs do control slightly differently from the usual fighting game set-up. Each limb is controlled separately, with punches being thrown using the bumpers, left bumper for the left side and right bumper for the right side, while kicks are mapped to the triggers. Holding the button will increase the strength of the hit, but also telegraphs your attack, leaving you open to a counter. You can jump and hover with the jetpack by using "A", boost around the place with "B" and can block and counter with "Y". Watch your pace though, you also have a heat bar. This functions like the stamina in other games with punching, kicking, jumping, hovering and boosting all causing it to increase, and if it fills completely, you'll be left overheating and unable to do anything but walk for the few seconds it takes to cool down again. Also while fighting, every hit you land or gets landed on you builds up a separate energy bar that powers the special abilities of each character. These work the same for every mech, so you don't need to remember a million inputs each for every fighter, instead, all you do is hold X and press a limb button (Bumpers or Triggers). Each limb has a different power, and powers vary widely across characters but all activate the same way. Again, this adds to the party game feel, no-one gets too much of an advantage through knowing all the moves and it allows new players to quickly pick up and get into a game. And finally is each of the character "Ultimate" attacks, a powerful move that can only be used when nearly defeated. It can really turn the tide when all seems lost. It saved me, and punished me, on quite a few occasions! My only criticism with the game is that matches tend to play out the same way, with players rushing forward, landing a few hits, before backing off again to cool down. This led to rounds getting a bit predictable, but if all four players are involved, this is mitigated by the number of things going on and the sheer chaos of the fights.

Looks wise, they opted for a bright cartoon style, one that fits well with the theme and reminds me of early anime like Gundam, western cartoons like Transformers, and shows like Power Rangers. The arenas all have little details that set them apart from each other. For instance, the US has a port city with a harbour to fight around, and smash through, Egypt, on the other hand, seems to be barren and deserted (no pun intended) until your massive weight stands in a certain place and you crash into a buried tomb! And it doesn't end there, all in all, we have 10 locations to provide some environmental variety as we smash, bash and crash our way around the globe, and even the Lunar surface. 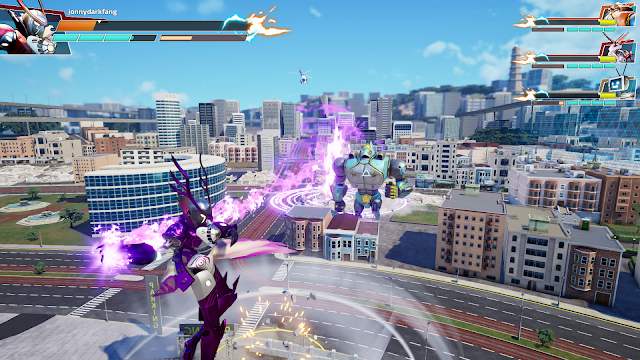 So, all the various locales look decent, even though they could be a little bigger, and each is recognisable and unique. But those are just the backdrops. The real stars of the show are obviously the mechs.

And we do get some interesting ones to play with!

Whether it's the anime styling of Watchbot, the Pharaoh themed Setesh, the DragonZord-like Metageckon, or any of the 12 combatants, every single one is well designed and has a unique style. Each has an influence from some element of popular culture and have flashy special moves and excellent Ultimate attacks that look good, especially when all four players are on the go. Each step, or attack, feels like a giant robot should feel, both weighty and powerful, and if all four players know their stuff, it can quickly become quite the spectacle, as giant, building-sized robots smash each other, and the location, into a smoking pile of rubble.

And that's the basic gist of the game. There are various modes to explore, of course, you can play couch co-op or online, and can play teams or a free-for-all. All this can involve between 1-4 players, depending on mode, with each player controlling a different robot. There's also a slightly stranger mode if you want something a little different. Multiple players can control one bot, with each player controlling a different part of the whole, one being the legs while another is the arms, or even 4 players taking a limb each! We also get a single player campaign. Unfortunately, each character has an almost identical story, with your mech tasked with clearing the arena of waves of alien creatures, as well as the occasional mech. Little text box conversations will explain the story between bouts but it's not exactly Shakespeare. It's also short, and easy. Also for some reason, you can only play one character at a time without restarting completely and losing all progress. Only having one "career" at a time was irritating, especially at first when I was trying to familiarise myself with the roster before going online. The practice mode can be used to check them all out though, as can creating a one player match against the A.I in the Versus mode, so it's a minor niggle.

One little thing I would like to mention before we finish, is the skin unlock system because I liked how it worked in this. There are loads of skins and accessories to collect, but instead of nickel and dime-ing you for everyone through microtransactions, they are earned through gameplay. Each match, whether it's the story mode, a custom fight or an online battle, whether you win or you lose, you'll get a random skin for a random character or a cosmetic accessory to wear. Unlocking all these is a great little bonus because there are various rarities to find, all look great, let you look flashy online and are all themed differently. Plus, you always feel like you made some progress, even if you lose. I even lost a match but earned a rare skin in the process, and that really takes the sting out of defeat! 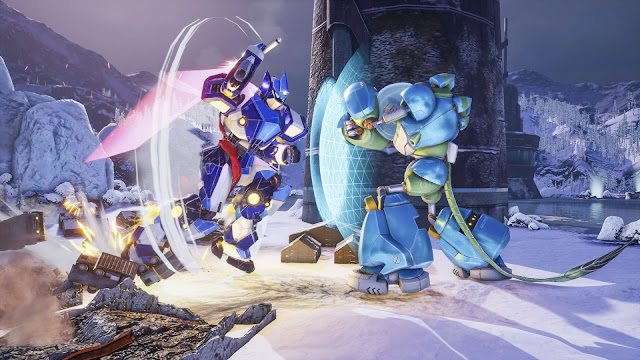 And so that's basically what you can expect. It's a fun, party style brawler with colourful, interesting characters and cool locations. As a pick-up-and-play party game to pull out with friends, it's one to certainly consider. The easy to get to grips with controls make it ideal for that situation. Though not perfect, it can feel a little button mashy now and again, and the lock on failed a few times. When all is considered though, it's a good little fighter that really shines with friends, but can get a little samey without them. A fun diversion, one that's a different take on the fighting genre but also one that won't replace the serious, hardcore fighting game in your collection.
OverRide-Mech City Brawl released on 4th December 2018 for £24.99/$29.99
Developed by The Balance Inc
Published by Modus