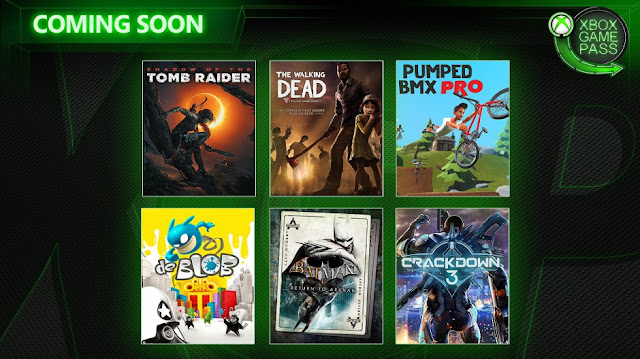 The Inside Xbox team revealed yet another decent offering to those with an Xbox Game Pass sub last night, with a bunch of new games coming to service this February, and Crackdown 3 also coming February 15th. The full list of games coming can be found below.

Shadow of the Tomb Raider (February 7) – Xbox One X Enhanced
The climactic finale to Lara Croft’s origin story has arrived on Xbox Game Pass. A dangerous and mysterious organization known as Trinity sends Lara on a thrilling action adventure through deadly jungles, treacherous underwater caves, and the most challenging tombs in the game’s history. To survive, she’ll have to become one with the jungle, use the environment to strike her foes quickly and quietly, sow fear in their ranks, and discover what it really means to be the Tomb Raider.

The Walking Dead: The Complete First Season (February 7)
Play as Lee Everett, a man with a criminal past given a chance at redemption — protecting a young girl named Clementine during a zombie apocalypse. Explore stunning comic book style environments, solve puzzles, fight the undead, build relationships, and do whatever you can to keep your humanity in a world gone to hell. Every choice is on the clock, every mistake will be your own, and the consequences carry across the entire five episode series.

Pumped BMX Pro (February 7)
Jump on the pedals and hit the ramps in this momentum-based trickathon. Pumped BMX Pro features more levels than ever, each with their own set of challenges for you to smash. Choose one of the pre-designed bikes; or ride to the editor to create your own custom bike before smashing the global leaderboards and your friends scores.

De Blob (February 14)
Become a master of color in the 3D platformer de Blob. Equal parts amorphous blob of paint, struggling artist, revolutionary, and juvenile delinquent, de Blob’s goal is to replace the drab, lifeless gray coloring that the I.N.K.T. Corporation has imposed on Chroma City and its inhabitants. Flip, bounce, and smash your way past a diabolical array of hot plates, electric shocks, and ink turrets. Compete to control Chroma City solo or with up to four players via split-screen across eight unique and challenging multiplayer modes.