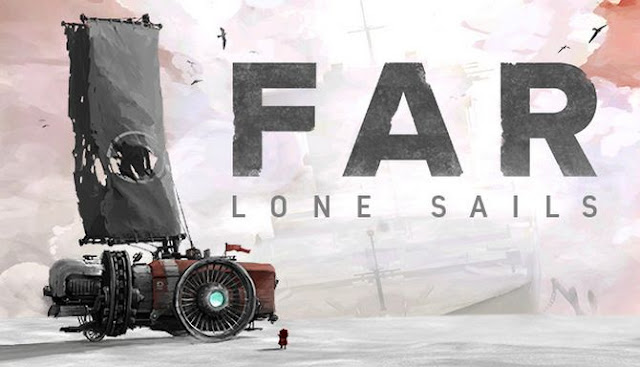 So, this one came along at a great time for me. I've been playing Sekiro- Shadows Die Twice recently and this was a perfect counterpoint to it. Whereas Sekiro has you constantly on edge, being tested and failing before that elation of success, this title was a much calmer and more serene undertaking. An enjoyable, sedate affair that was a different type of experience for me. One where I wasn't in deadly combat or frustrating battles, fighting to save the world but one where I could continue on my journey at my own pace, working through the puzzles without worrying about missing something and game over screens.

The release I'm talking about is called "FAR- Lone Sails" and it draws its inspiration from various places, but at its heart, it's a 2D "walk to the right" type of platformer, similar to Limbo or Inside, but with a focus on vehicle and vehicle resource management.

The world has a beautiful but minimalistic look, and its opening scene sets the stage for the adventure to come. We begin with a tiny, red cloak wearing character as they pay their respects at the gravestone of what seems to be their father.
The game keeps to this minimalistic styling, there are no text bubbles or speech, instead, the story is told through locations, decorations, environmental details, and the monuments you come across. The small shack you live in is rundown and it's quickly obvious that some great calamity has befallen the people of this world. As you move around the 2D sidescrolling environment, the next thing you'll stumble upon is the cobbled together refuelling and maintenance platform located at the back of your house. Here is where you'll find the other "character" in FAR- Lone Sails.
The Okomotive.
This huge vehicle is both your transportation and your home as you travel on your journey. Think Jawa Sandcrawler from StarWars, except a one-person version. It also introduces a basic, but constant, gameplay mechanic. While the world is very stark, with a mixture of black and white being the major colours, all buttons and points of interest are coloured in very bright oranges and reds. There are a few of these located at various points inside the Okomotive and the game is good at letting you discover the function of each on your own without giving any invasive pop-ups or other "help". The set-up is fairly intuitive and finding the accelerator, brake, winches and furnace are really easy to do and get to grips with. 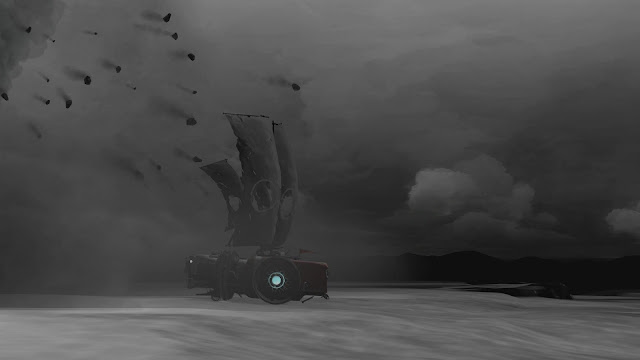 Also lying around are some junk items that can be moved and stored inside the vehicle and this is the resource management part of the game. As you travel, you'll come across various things left behind by the former inhabitants of this now empty world. A couple of these have achievements linked to them but every item seems to only have one function. They're fuel (unless I missed something) and are obviously used to power the vehicle, as well as other things, and allows you to continue the journey through the various locales. You'll pass through deserted ranches, wrecked towns, through rusting industrial machinery, shipyards and dried up sea beds, all the while you'll continually come across things that block your passage and must be overcome.
The backgrounds and environment designs look great, and really convey a sense of loneliness and isolation but also of calmness, serenity and beauty. There isn't any pressure or frustration in any aspect of the game and this comes across in both the aesthetic and the gameplay choices made by the developers. Although the world is destroyed, it doesn't feel threatening. I died twice the whole game, and one of those was a test to see if death was even possible.
The challenge in the game doesn't come from combat. In fact, there are no enemies at all. This post-apocalyptic world has no zombies or mutants, no automated turrets or wasteland raiders. Instead, your "enemy" is being stopped, of being blocked, of being unable to continue the journey. This might take the form of a bridge that needs lowering, a wall that needs destroying or a barren dried up sea bed that needs crossing, and you'll do this through some mild puzzle solving.
You might be using switches to lower walls and move lifts, finding the correct combination of movements to clear a path. Sometimes you'll need to upgrade the Okomotive itself, adding new functionality like a sail that helps conserve fuel or a device that sucks in resources automatically.

And that's the main thrust of the game. Ever heard the phrase "It's not the destination but the journey"? Well, this is that phrase in video game form. I wanted to see what would come next on this charming and beautiful little game, a calm and thoughtful experience that genuinely surprised me with how much I enjoyed it. As someone who tends to play action adventure games or strategy RPGS, I found this serene journey a gorgeous and emotional one and I'd recommend it to anyone who likes the more "artistic experience" type of game. 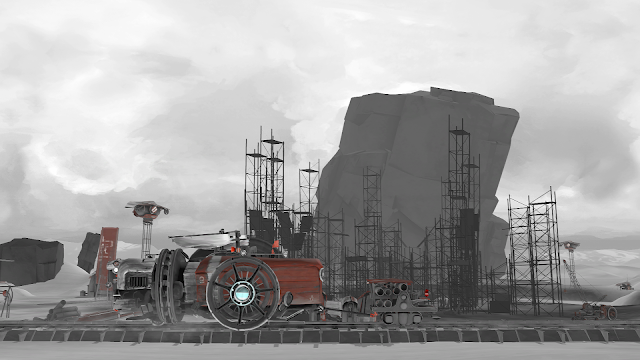 That's not to say that the game doesn't have faults though. It's short, I finished it in around 3 and a half hours and all in one sitting. There's also an achievement for a 99-minute completion so it can be done way quicker. It also has basically no replay value, apart from achievement hunting. Storywise, the game also ends on a cliffhanger and actually felt (to me anyways) like it was the end of the first act, not the end of the whole game. There is leaving people wanting more, and then there's not giving them enough to satisfy them. You'll need to decide for yourself whether you feel it's worth it or not, but bear in mind the lower price point, it's only £12.49/$14.99 so factor that into the decision.

Overall: Ultimately, it's an interesting and beautiful looking indie title. It has a nice artistic direction and the feeling of a calm journey is one that I've never really experienced in a game too often. I'd have liked the experience to last a little longer but, considering I'm still thinking of the ending, still wondering what happens next and what happened in the story, means that they certainly drew me in. If you want frantic action and replayability, this isn't for you. If you want a short but artistic game, one that will make you think, has a good story, an intriguing world and interesting concept, I'd recommend you take a little look.