Review - The Adventures of Elena Temple 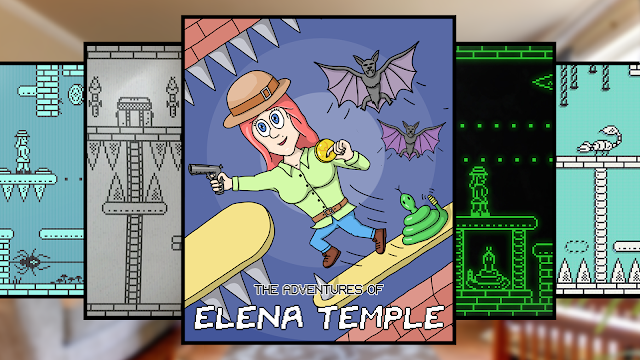 Hello all! It's your big pal jonnydarkfang, back at it again! It's been a good few months since I've written for the wonderful Honest Xbox reviews and I'd just like to thank my boy Tony for having me back.
And I'd also like to thank you guys and gals for reading!

Now, if you've been paying any attention to gaming at all over the past few years, you'll be well aware that many retro and retro-inspired, games have been appearing all over the place lately.
And that's what I'll be reviewing today, a retro-inspired puzzle platformer called "The Adventures of Elena Temple"
Before getting into it though, I'd like to tell a little bit about how the game presents itself. You see it pretends to be a genuine retro title, with the game even having an entire fake history chronicling the games "original" release on a failed computer, all the way through a list of pretend ports. If you've ever seen the "Forrest Gump" movie, or are familiar with Marvel Comics "The Sentry", you'll recognize what's being done. It's like they've done back and retconned the history of video games, inserting their title into the story of these much-loved systems from the past. You can choose to play any of these "versions" and they include parodies of the Commodore 64, Apple computers, Gameboys and a few others too. Each "port" even has a little description chronicling its fake history, and look like they genuinely belong on the relevant platform. Although they don't do anything but change the graphical style and background, each of these old school machine parodies is a nice addition and certainly press the nostalgia button in us oldies. 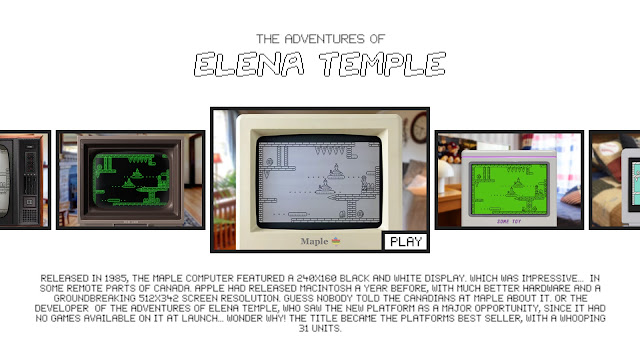 Ultimately though, this is just window dressing, so let's get to the important part, the game itself.

We play the role of an Indiana Jones/Lara Croft style adventurer who discovers an ancient temple. As she uncovers its secret underground entrance, the renowned explorer Elena Temple feels ready for her biggest adventure yet. The lure of gold and precious gems overcomes the fear of the unknown as she falls into the pit. She is late to realise that the way into the dungeon is not also the way out. Her focus is to find an exit, but she'll be sure to get rich while doing it.

This little story describes the action rather well and explains the main thrust of the gameplay, to collect the treasure and escape.
But obviously, things aren't that easy.
The temple itself is made up of 50 individual rooms, and each not only contains a few coins or such to collect but are packed with platforms that may move or disappear, arrow-shooting traps, giant spikes and a whole load of baddies too. The layout is rather open and you can head in any direction that's available, you even have a map to keep track of where you've been, but you'll handle most rooms in a very similar fashion. Your time will be spent grabbing bullets for your two-shot pistol, killing the baddies, and platforming to get coins and gems. Think of each room as a separate puzzle, with collecting all the treasure as the goal. You'll need to assess each room, figure out how to reach the coins, gems or goodies, and then use your precision platforming abilities, and expert timing, to collect them. It sounds simple enough, add in disappearing platforms, flying arrows, skewering spikes, crushing cogs and the perfect timing, however, and you'll find death is a constant companion.
Here though, the game does play it a little easier than the retro games it emulates, by giving you infinite lives. One-touch is enough to kill you but death results in you restarting from the beginning of the screen, or from your last pick up and, although they are counted, seem to have no other effect. Elena respawns quickly too, allowing you to make fast attempts at any place you find difficult.
And you will find certain rooms difficult, especially if these types of games aren't your thing. Factor in disappearing and reappearing platforms, arrows shooting everywhere, as well as your low ammo supply, and you'll quickly realize that solving the puzzle is only half the battle, with actually reaching the treasure being the real challenge.
Luckily though, the character of Elena is rather responsive and fluid to control. She can walk left and right, jump with "A" and shoot her gun with "X". She can only hold 2 bullets at a time though, so ammo management is usually part of the puzzle. Focusing on precision platforming and perfect timing, it provides a rather good challenge that old-schoolers might find fun. 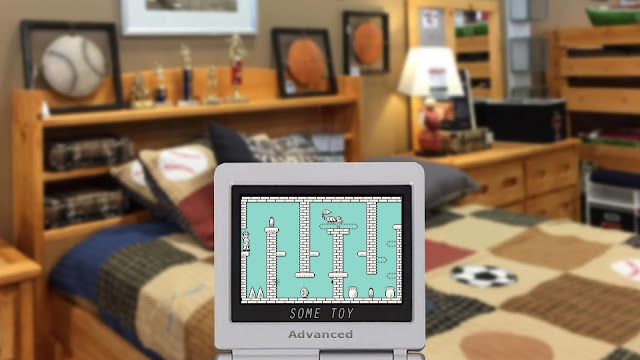 I do have a little bit of criticism, however. You see, once you've worked out the wheres and whys of collecting the treasure, and found the exit, there isn't much to bring you back. The game does record how often you died but apart from trying to beat your best, there isn't much replayability to be had. Also included in this Xbox version, and coming to other editions soon, is an extra dungeon called "The Golden Spider dungeon". Adding an additional 20 rooms and 100 coins, it also increases the difficulty and will provide an extra challenge to those who want it. It does suffer from the same problem as the original temple however, in that once you've worked out how to get all the treasure, there isn't much else to do. Another niggle was with the "different" versions available. As it stands right now, there's no real reason to try the different "emulations" because they all play identically. I wish each version had different layouts but instead, each simply functions as a skin.

Summary
A retro-inspired puzzle platformer, The Adventures of Elena Temple is an interesting look back to old school games. It does a good job of emulating the gameplay of yesteryear and provides a reasonable challenge for its price. With simple controls, it's easy to pick up but brutal platforming could easily cause frustration in those new to the genre. Not much replayability makes long term enjoyment a factor but, with a budget price, it still had a few hours of fun involved. Those expecting something with a more modern feel might be a little disappointed, but for retro game lovers, it's a faithful feeling homage to what came before.