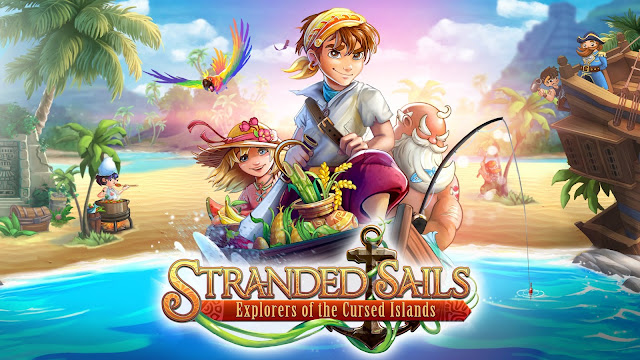 Stranded Sails was a game that popped up on my social media timeline one day and saw me sold on the idea ever since. Just something about games like this of late which see you having to go out and explore and take care of yourself and a bunch of others seems to be becoming my thing. Stranded Sails ticked a lot of the right boxes in trailers and in-game ideas the game showed off, but how did it go once I got my hands the game?

The game begins with you racing to your father's ship before they set off an adventure, with that adventure obviously going wrong once a colorful bird sits upon the mast of the ship and a storm comes crashing in. Waking up on an island you are shown the basics on how to do a few things which will help you in the game, with you finally making it to another island where your Dad lays injured inside the battered ship, with your job being to find the rest of the crew and also help feed and get them shelter, as you try to help them all survive and hopefully get home.

Now like I said at the start of this review, the things you needed to do to help the crew and also going out and exploring the world on offer to get items to help craft things sounded great. While it starts off okay and shows promise, things do just slowly become mundane and at times a frustrating experience the more you play. So much so that God knows how far in now I just find myself not feeling like carrying on. 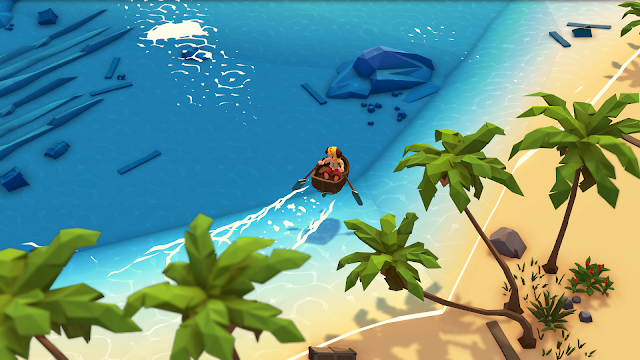 If I'd typed up this review before the latest patch dropped this would be a totally different review, with the game pre-patch having missions seeing items just not being where they should, with me even loading up a saved game to find items I'd picked up no longer there in my inventory and the places they should be on the island just showing empty boxes, making me have to restart the game early on. The patch fixed that it seems, but it still really hasn't fixed an issue that really takes the fun out the game, that being your stamina bar. The stamina bar is a bar filled up of four chunks of energy, which you can refill by either sleeping, eating food you cooked and stored on yourself, or a little into the game by preparing a stew for the crew and taking some for yourself. The problem here is it just drains far too easily, as anything you do it will go down. Not so bad to begin with, but once you find yourself needing to row to one of the islands outside of the one you are on, well, that's when the frustration kicks in. You don't lose items or die when your stamina bar runs out, so that's good. You just find yourself took back to your bed and having to start again on whatever the task you were doing at the time. Great if you were far away on another island, so you can see what I mean by frustrating

On top of the frustrating stamina system the game has, the other thing that slowly drains away the fun is that over time there just becomes nothing to really do after completing the most recent task. What I mean by that they always seem to be the same type of thing. Oh, go back to that island you just left and go and look for the same stuff again, just because. The only way to fast travel is back to home camp, with one to a camp on any of the other islands being a much more useful thing if it was in the game. The seas you travel across offer zero danger, so it basically just holding down the X button and watch your stamina go down while you pass rocks that look a lot like the last rock you passed a few seconds ago. The only feature about the water that deserves a mention is the fishing, as who doesn't like fishing? This unlocks a bit into the game, and all you need to do is cast out into one of the many fishing spots and press the A button to reel in when the circles match up. Depending on how close you get it the bigger the reel in you get. Fun to begin with but of course, becomes a mundane thing once doing it 50 or so times. 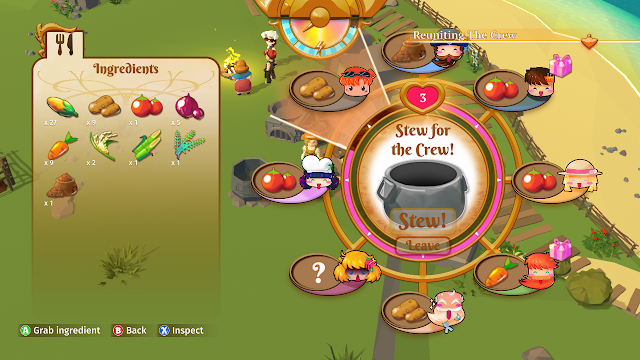 Next up is crafting, building, farming, and combat.

Farming is shown to you very early on, otherwise, that previously mentioned stamina bar would be a hell of lot worse. Seeds are given to you along the way while out exploring, with a garden patch at home camp (can be added to and expanded so you can grow even more) there for you to grow them. You must plant and keep them watered, with you then able to collect them and use in either the previously mentioned stew, which doing so will help fill that stamina bar much easier while also earning upgrades if pleasing other campmates with what food item you choose for them. You can also use them in the small frying pan to cook items to eat or store in your inventory for yourself. Upon finding new food items new secret recipes will also unlock in your cookbook, with you needing to find out the right ingredients in the pan to unlock them for future use.

Crafting and building are much of the same. Go to the islands surrounding you and find items to help craft things via blueprints. This like most things starts out great as the items you need are easy to find, but sure enough, as time goes on it becomes more a chore and a lot less fun due to the already overspoken about stamina bar.

Combat gets a quick mention here too as in the later stages of the game it unlocks. Basic beyond belief, but without it the game would feel strange, as what strange island doesn't have things that want to kill you? They don't really feature much though, so chances of you finding one once reaching that island and having enough energy to battle them will be rare, and will only happen if you've stuck around to unlock some of the better foods to cook. 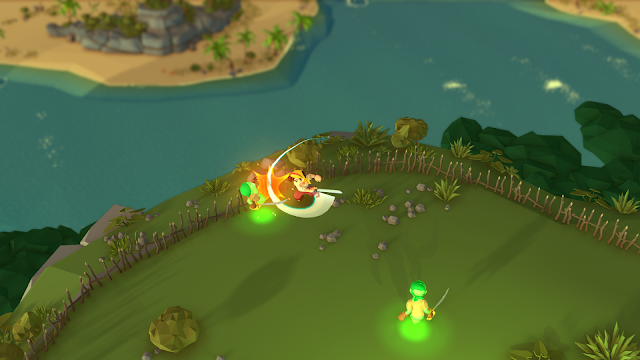 Overall: I've probably not mentioned a bunch of stuff here with Stranded Sails, but the fact is I fell out of love with it the more time went on. It starts out with such promise too, but lifeless islands, that terrible stamina system that even I'm sick of talking about, and just not much to it makes it fun for a very short time.
Explorers of the Cursed Islands