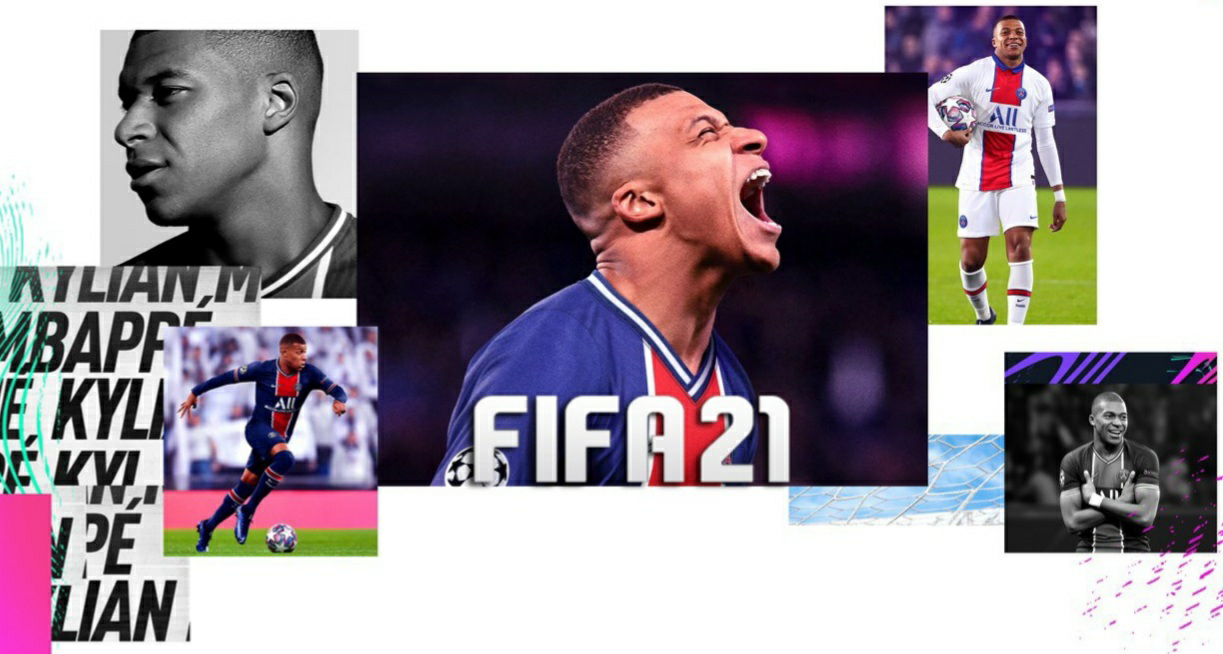 I'm on the side of the fence that looks forward to the yearly edition of FIFA come Sep/Oct time, with the online side of the game being something I stick on to play every other night after every review I've been lucky to have done of the franchise. I'm of that age now where the reflexes for things like online shooters isn't really there anymore, but throw me at a game of pro clubs where you have to work out the oppositions weak points and take advantage while you try to get those three points, and I am there loving it. 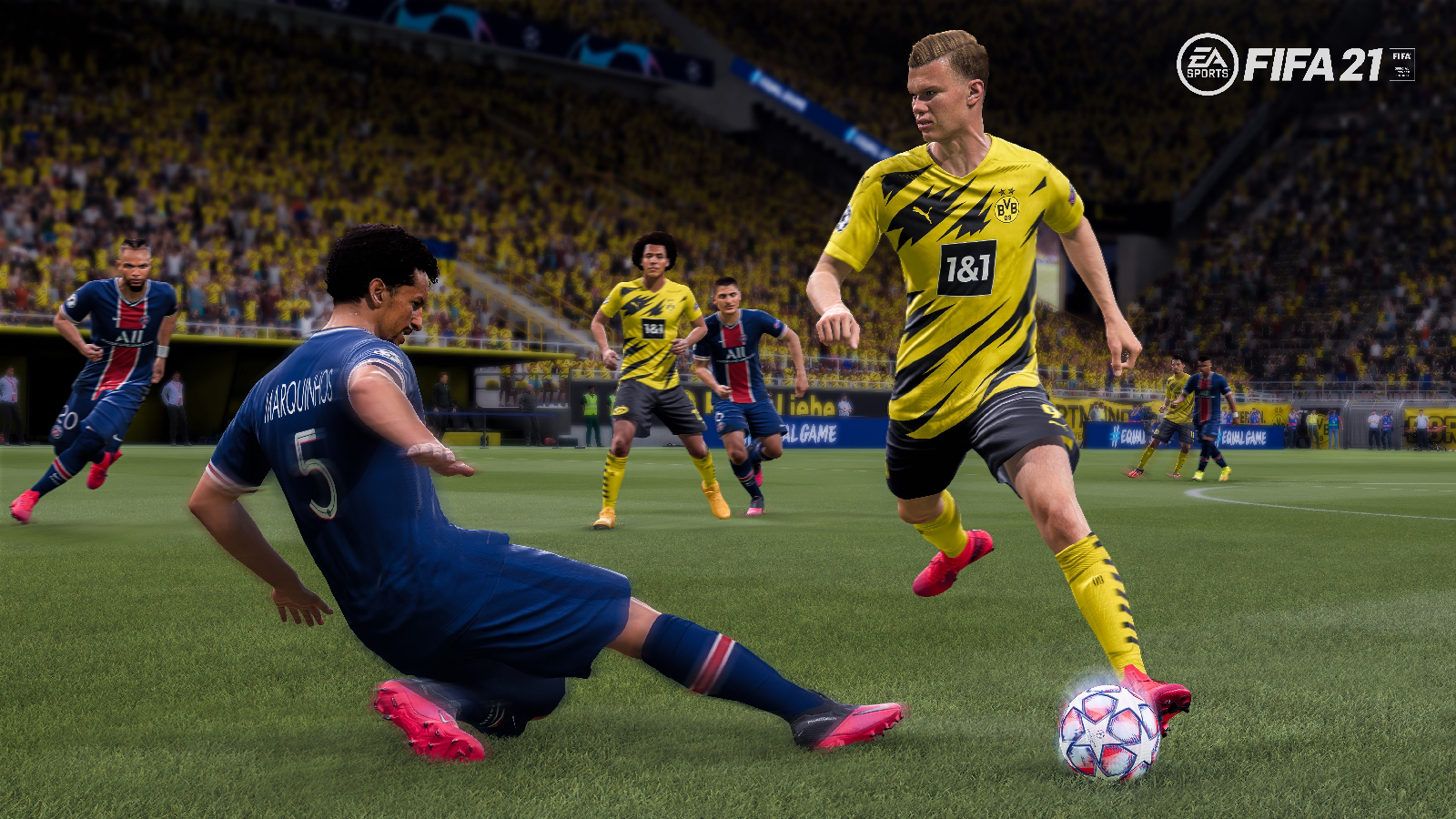 In truth I've missed any kind of build up or hype for games (including FIFA 21) since lockdown and since we tried to once again live a somewhat normal life. I knew nothing about any new features or improvements over FIFA 20, literally going in blind as they say. To my blind eye not much had really changed in the day or two of playing. A few modes have had a few tweaks with some new things added, and also the game looking a bit better in places. But I expect that to change even more so once we get the updated versions on launch day of the new consoles where they will look better than ever. Free of charge of course too.
The standard modes return once again from last year. Ultimate Team, Volta, Pro Clubs, Manager/Player Career and the other less used ones by myself such as single & co-op seasons, to the many tournaments on offer too. 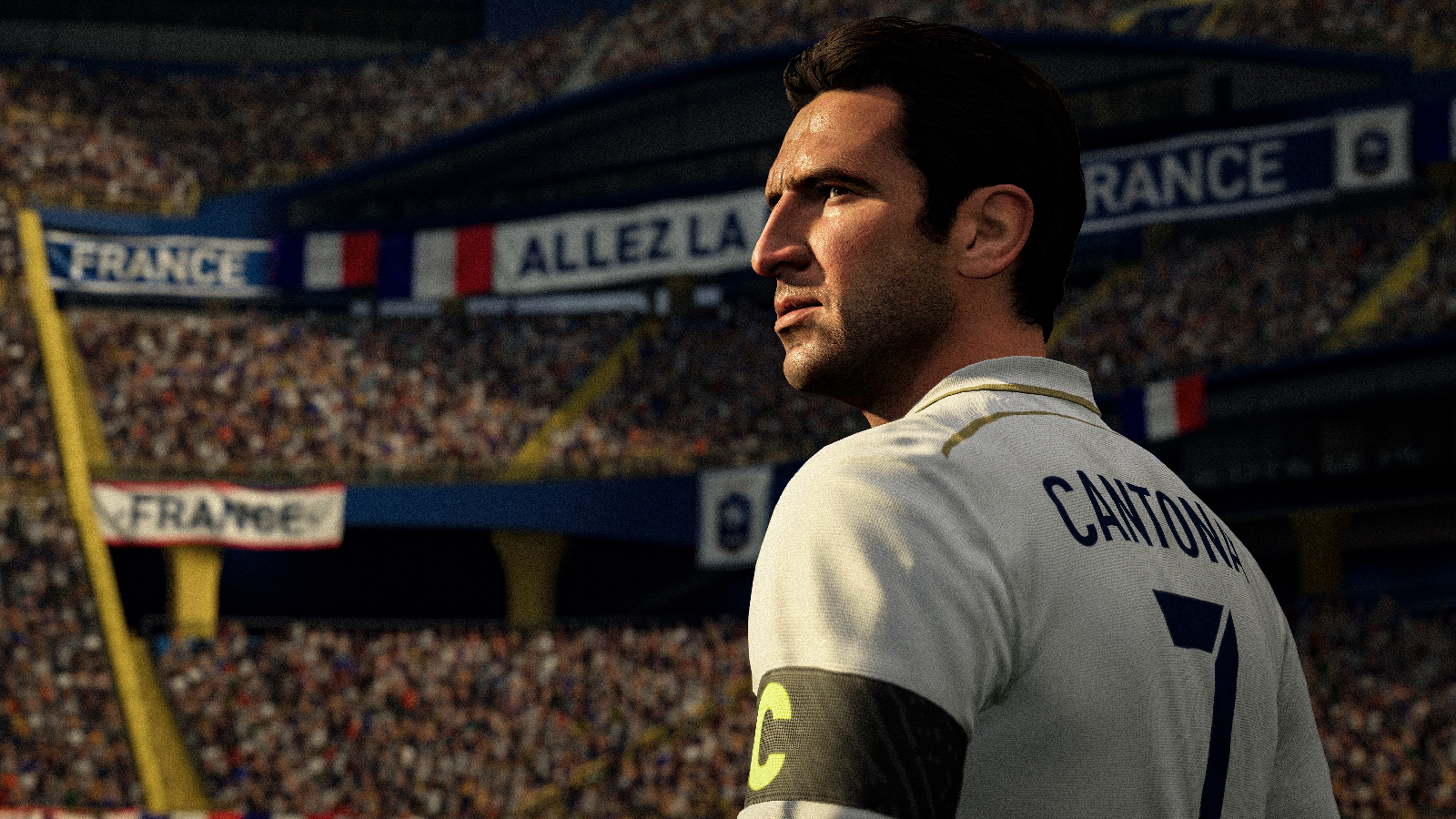 The few tweaks I've seen so far are things like Pro clubs now has a feature where you can rename and edit all the AI players in your team, along with club tactics there too. Other than that this mode is pretty much identical to FIFA 20. Ultimate Team is pretty much the same too, well at least to a guy who never dared take it online in previous games. One notable thing I became aware of and a worthy mention to the tweaks seen in this mode is fitness cards are no more, with your team now being full fitness no matter what before every game. Stuff like co-op FUT, and tweaks to help offline players transition in a bit easier when taking the game online with division rivals has been looked at too, so hopefully it's a lot more welcoming to you and helps see less cricket scores when coming against those actual players. 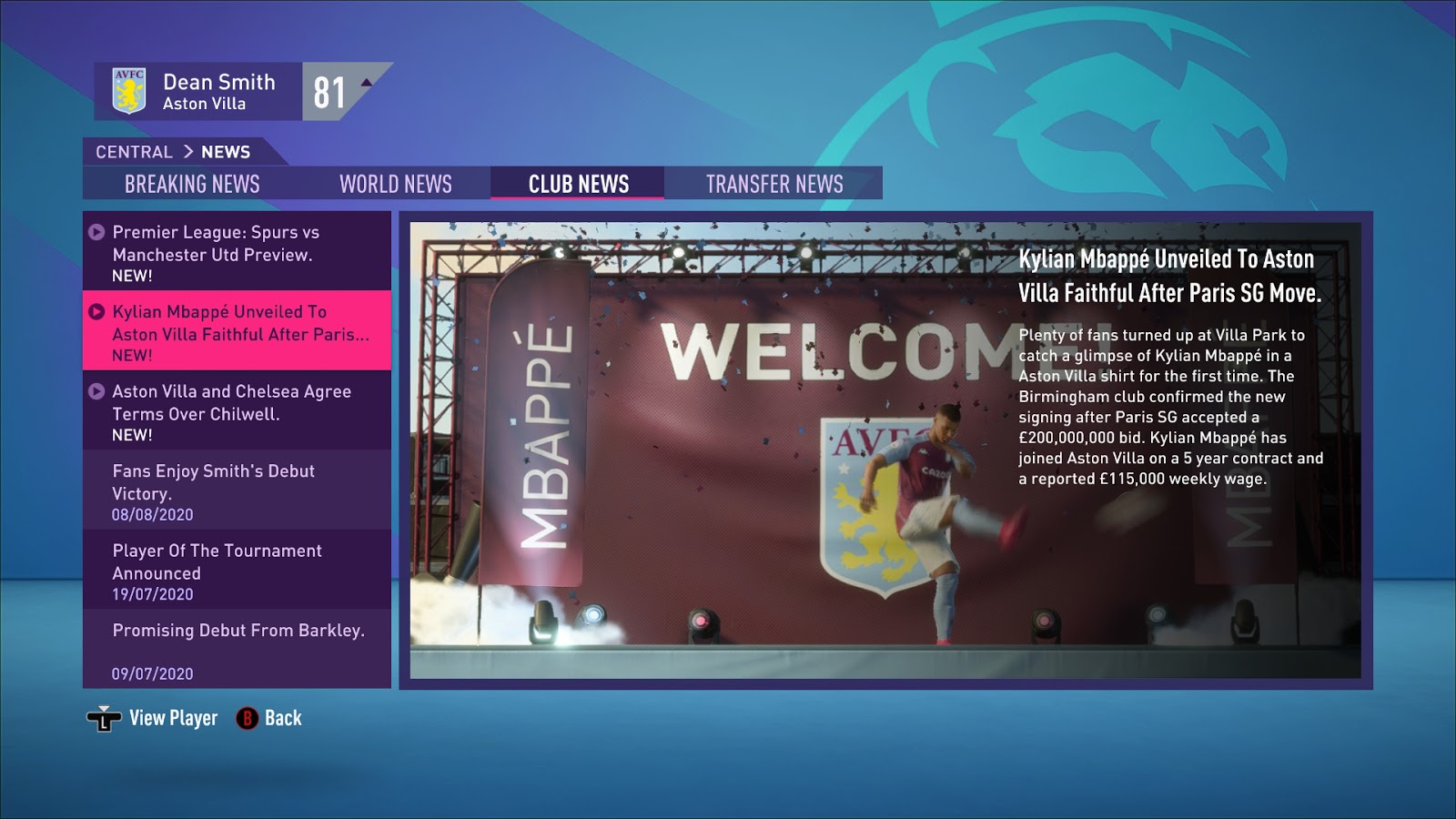 Career mode perhaps throws the biggest changes at regular players, with the smallest change seeing the option for a financial takeover right from the off, with the option of having upto 500 million quid sitting there for you to build the team of your dreams. In the mode itself you can expect a bunch of new things such as loan to buy being an option on players when it comes to transfers, and things such as a much deeper side of getting the best out the players with development and planning your weekly training before a big game, and getting your top players as fit and sharp as possible for that big game coming up. Player position changes are also thing now too, so taking that player in his twilight years and coverting him into a position that requires let's say less pace to repay his good years at your club and keep him around a bit longer is now a possibility. Other features can be seen in the image below. 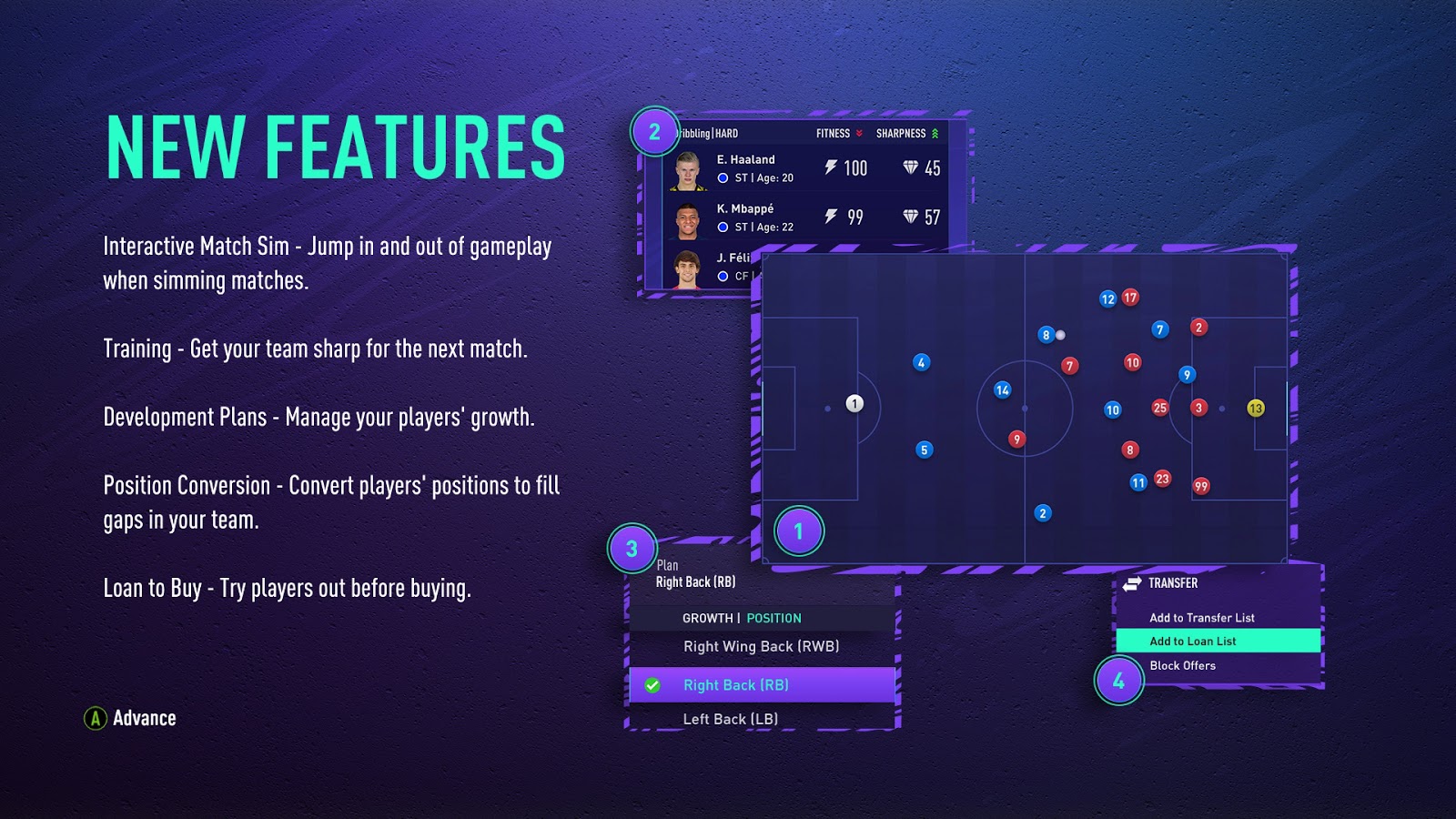 Volta football is still a mode I'm unsure of, with it coming in to take over from Journey mode last year, we see it here again with, of course, a few new tweaks like all other modes. You can take on a somewhat basic cinematic mode that is short and sees you taking your team around a few world locations to win a cup that seems to be centered around Kaka. It's over pretty soon, so is very much a foot in the door to the other ways of playing this mode and growing your team. Online you can tackle things solo or with up to four of your mates in the bunch of modes available, but I hit a few flaws when taking it online. One major thing was playing those with a terrible connection. In a game which requires skill and quick reactions to opponents using skill to find those few seconds to get a shot off, lag can suck out any fun you can expect to get here. Throw in the lack of any kind of kits, and unless you've took the time to edit your team and likewise the person/people you match up with, games can be somewhat confusing when trying to pick out a teammate. It can become frustrating to the point you will just want to leave after a few goals have gone in and the red mist descends. Those who enjoyed this mode in the past though will be happy, just more of the same really 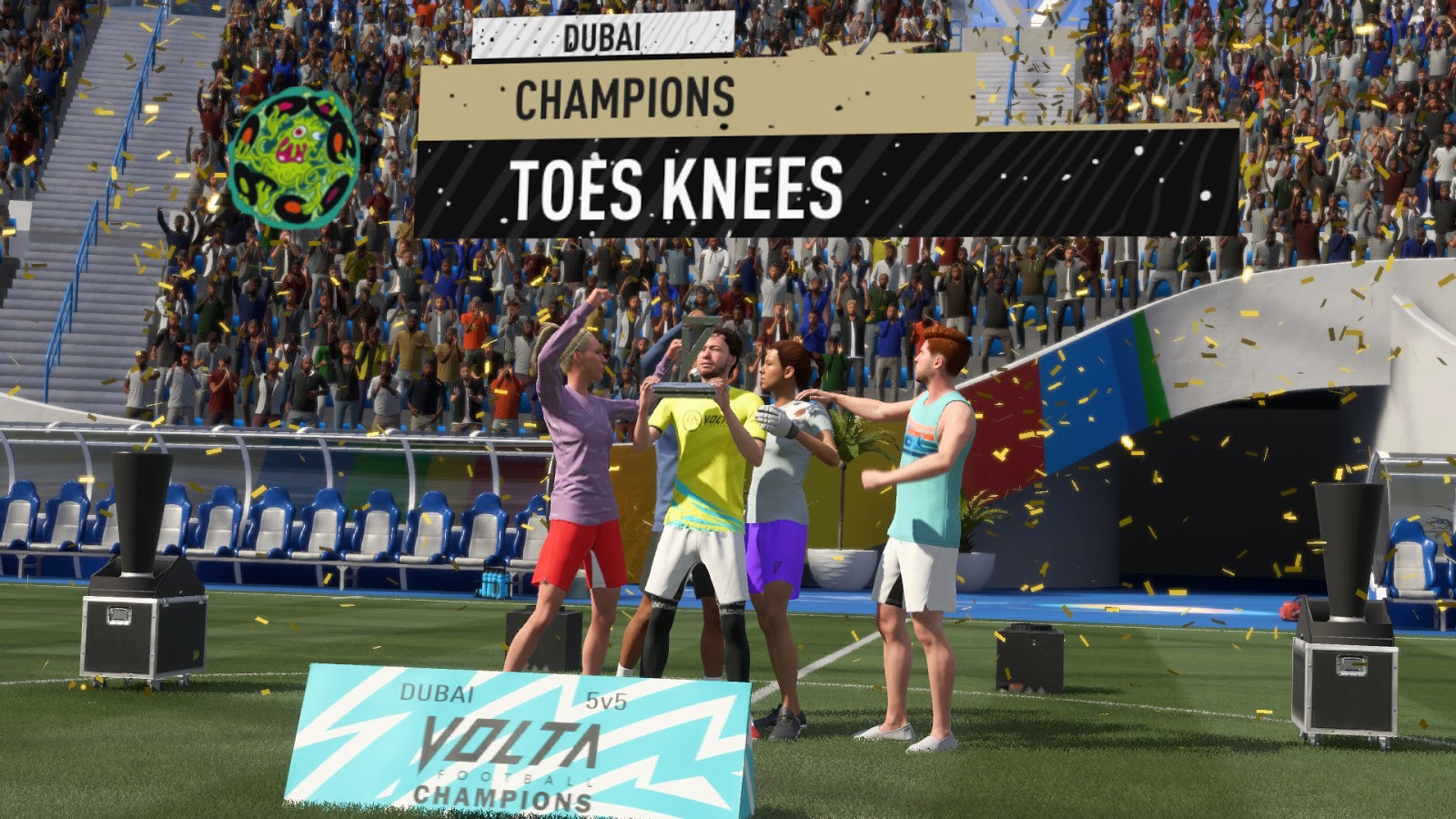 In terms of on the pitch, anything any reviewer writes in their review here will be pretty pointless within a week or two, with on the pitch stuff always getting updated if players voice their opinions enough about it. I've not really got anything bad to say about it so far personally, taking in a bunch of games in most the modes on offer, it all feels pretty solid to me. Looks wise, it looks really good, with the eldest Son even commenting how real it looked while he took his eyes off Fortnite for longer than three seconds over the weekend. Special mention to the song choices for the game this year too, with the soundtrack found on Spotify by clicking here. I'm an older guy but have already been adding some of the songs I've heard so far to my liked playlist, so well done here EA. 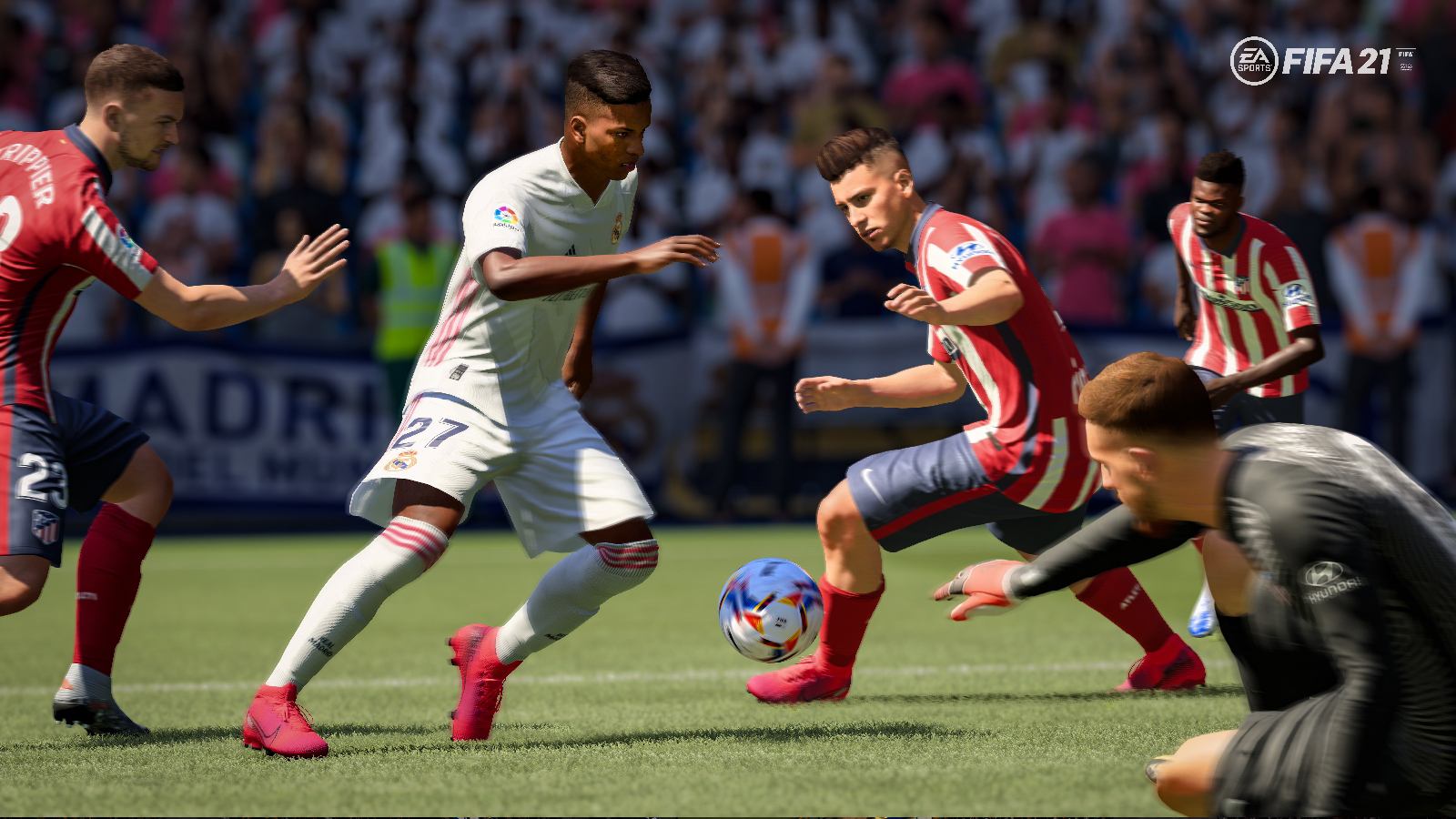 Overall: This review could be a long boring read if I just listed every single tweak and improvement, but it's just easier to say this to you, FIFA is alright this year. Sure, unless you really dig deep into all the things they've worked on away from all the shiny stuff your eyes see on the screen, not much feels like it's changed once you get your hand on your controller. That said I've lost 30+ hours in it so far and have really enjoyed myself, and that's all I ever really want from FIFA. If you're one of the people who cry "but why do you pay for the same game every year?" FIFA 21 won't suddenly pull you in and make you realise why we do it, but for your football fix there is just nothing better out there (sorry PES players).
EA EA Sports FIFA 21