If you thought my last review about a charging dock must have been hard work to make an interesting read, how do you think I feel doing it for a Twin Rechargeable Battery Pack? You have already read (I hope) my thoughts on my previous way of getting all that power to my controller of many worlds, with this one being less shorter than that just because this pack is a lot more basic when it comes to what you get in the box. It's also worth noting that for a few quid more you can hook yourself up with the docking station version of this pack if you wish, so be sure to check out links to both products at the end of this post (neither of which will give me anything if ordering off. Just so you know).

I've dealt with Venom a few times in the past when it comes to reviewing their items. With me being lucky (depending on how you look at it) enough to getting my hands on some of their headsets and reviewing them elsewhere in the past. The one worry I had spending some money on a Venom product was what kind of quality would I get from it. While the venom products I've covered were somewhat unique at the time (vibration headset and their weird looking In-Ear Stereo Gaming Headset), the thing I got from both products at the time was they weren't really quality made products, feeling cheap, and certainly easily breakable when it comes to the in-ear headset at least. I always classed Venom as the budget brand of console accessories, But would this pack change that after not going near their products for so long? The main questions I had were things like, what battery life would these have on a full charge? Would the connection be as flimsy as the last charging device I had? Would they be easy to remove from the controller? 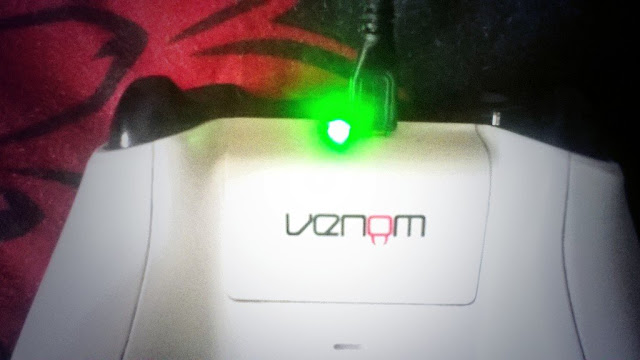 Reading up about this pack on the website before typing up some words, the product page for this pack boasts of 18 hours worth of play time on just a 2.5-hour charge. The way the battery works without a dock is by having a flashing green light when charging, but turning to a solid green when fully charged right there on the battery itself. For testing purposes I ran these batteries dry after fully charging them the first few times, just to see how long it took to get a full charge, and just how long it would take before I would get the low battery notification flash on my screen.

To fully charge back up I would leave them overnight for around six to eight hours, waking up to the green battery being a solid green to let me know it was fully charged up. Using that pad after this I would get anything between ten to twelve hours of game time out of it, obviously, this would be a little longer if doing nothing with it like watching a movie or flicking through Youtube. This was more than enough for me, with the previously more expensive set I had giving me less than half of that game time when being fully charged up. Thumbs up here Venom.

Next the design, and this is also something I can't fault Venom on at all. Offering the standard black for old-school Xbox One and X owners, or the choice of picking up the white set for Xbox One S owners, with both having the Venom logo for all to see on them. The batterydesign goes for the one section that clips into one of the sections on the battery compartment of your pad, so while secure it's also easily removed if you have a favourite controller and want to swap it over to the other fully charged one you have ready and waiting. The cable to charge both batteries is a huge two-metre long USB cable, which at the one-metre mark splits off into two separate smaller connectors which easily connects into both batteries..You can also charge up while you are using them, so this cable is just about long enough if your bed or settee isn't too far away from your console.

Overall: I can't fault Venom on anything this twin Rechargeable Battery Pack has given me in the few weeks I've had it. It's already saved me money in terms of not having to buy standard batteries, and if nothing less has made this Easter break a quieter time when it comes to the kids shouting "DADDDDD, MY BATTERIES ARE DEAD" like it had been for the last few weeks. If you're in the market for some cheap yet decent power for your controller, I would happily say I recommend these. And Venom, if you happen to see this. I would be more than happy to review the new vertical charging stand you just released. You know where to find me ;)