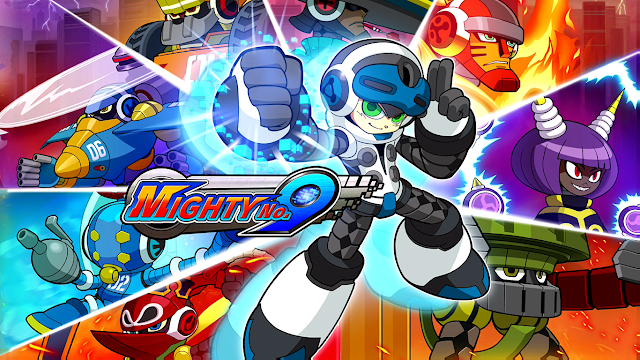 Boy has a lot been said about this game on the Internet since its release back on June 24th, and not all good. I went in reviewing Mighty No.9 not really knowing the excitement and hope surrounding its release if I'm being honest with you. My knowledge of its back story and how it came to being made pretty much goes as far as an email a few days before its release, and me deciding I could fit a review in for what looked a game I would have enjoyed back in my younger days. If you're here for a review from a guy who loved the crap out of games such as Megaman, then you're looking in the wrong place. In my younger days Megaman was never a game I felt the need of giving some of my gaming time to for some reason, so I just never got around to giving it a look.

Loading up Mighty No. 9 I felt like I had gone back in time when the start menu music kicked in. Closing my eyes I could feel the warm memories of games such as Sonic and other classics of my younger years all come flooding back to me, which in turn got me excited with what Mighty No. 9 had in store for me. Turns out what he had in store for me was a classic Japanese 2D Side-scrolling action game, with the challenge level for an old noob like me turned right up to maximum. 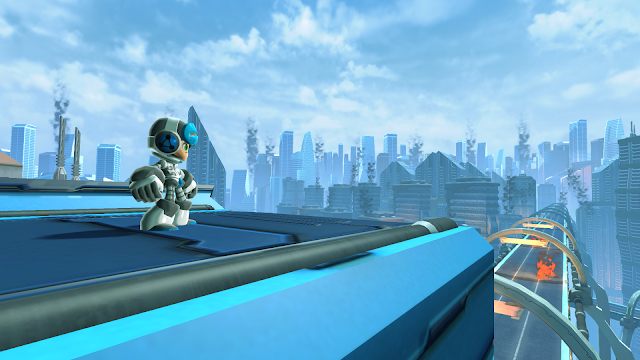 Mighty No.9 sees you having to face off against other Mighty robots who have been sent mental and out of control, thanks to a mysterious computer virus that has struck them all apart from you. You play a guy named Beck, whose job it is (well he has no choice really) to take down these other robots while also working out where this virus has come from.

Playing the first level, I was suckered in with a pretty easy level followed by an end boss that did nothing more than shoot a few rockets and look pretty. After that though I found myself constantly getting my ass handed to me, even with the 9 lives I had to get through these levels I would still fail. 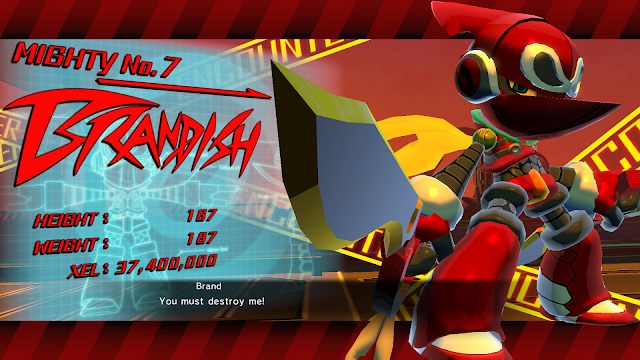 Combat is key in the game if you want to stay alive, and this is where Mighty No. 9 sort of started to unravel I guess. Pressing the x button to shoot your bullets followed by dashing with RB (or as the game calls it, AcXelrate) into enemies to fully wipe them out is the main attack throughout the game. Beating bosses unlock new kinds of attacks too, but as I said above, I have about as much chance of that happening as I do winning the lottery.

Just finding myself frantically pressing shoot and dash repeatedly started to become boring for me around the 3 hour mark, so I hit the point of no return soon after. There I was shouting rude words at my TV, a rare side to me that only comes out on extreme occasions. I didn't expect Mighty No. 9 to hold my hand and make it easy for me at all, but if a guy is 7 lives down on a boss it has to do more than throw pointless power-ups at him otherwise you run the risk of what has happened in my case. I really tried to give the game a chance not being a big user of this sort of genre previously, but after getting a game over screen for the 100th time and saying to myself, na, I'm done" I doubt I will return to the game now this review is up.

Throughout the levels you are also given some power-ups every now and then, but if you were to ask me what these power-ups do I honestly could not tell you. Trying my best to think over my time with the game, I can't remember a time when the game said oh this colour power-up did this or that. Most of them are ways of filling your health back up, with a couple making you pause the game to actually use them which isn't annoying mid-battle at all (note sarcasm). 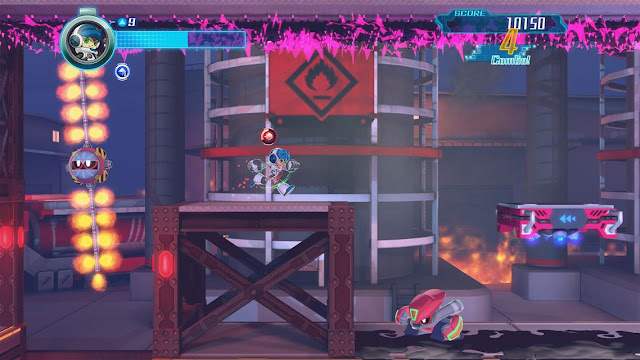 Overall: Those who go into the game having loved games in the genre previously, and are not expecting a Megaman game will perhaps get a lot more out of it than I did. The in-thing now seems to be making games of the old generation, by which I mean ones that were tough,  had a set amount of lives, and save points being few and far between, which by the way I could do with back then. Now being old and not as quick as I was back then, games like this get me to the point of where fun just isn't possible, so it becomes the gaming equivalent of me smashing my face against a brick wall. Like I say, if a challenging game is your cup of tea then you will get more out of Mighty No. 9 than I did. For me though, Mighty No. 9 will now be sitting on my HDD until I feel like torturing myself for whatever reason.

For those that want a score, well this would have been about a 5/10