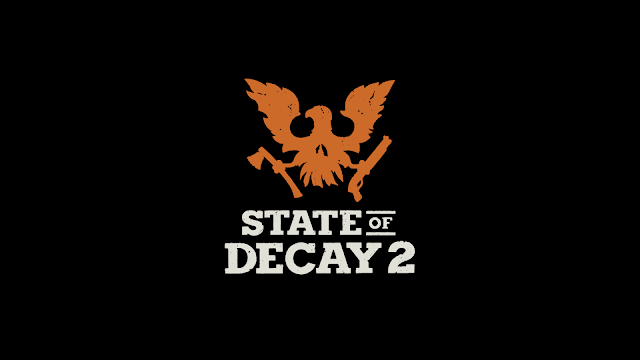 At last, an Xbox One exclusive game to type up about. Something that seems to be a rare thing these days. Right off the bat, I shall hit you with some truth. The first State of Decay game I found just alright. with it being something I found myself not losing that much time in if I'm being honest with you. While it was fun for a bit, I sort of just moved on from it and never returned to it after a week or two. So bear that in mind for this review, as I have seen so much hate for people on social media who dared to not say how awesome this game is and have their own opinion on it. Internet people, it's okay to not all share the same opinions, life will go on, and you can still enjoy whatever things you want to enjoy. Just because Bob from Stoke said Cuphead was a bag of wa**, turns out YOU can still buy it for yourself and play it and enjoy it. Bloody madness, I know.

State of Decay 2 has been my damn nemesis when it comes to typing up words on it since the code came through a few weeks back. Enjoying it one minute and losing a whole afternoon to it, to finding it somewhat repetitive just a few hours later, the game has been a ruddy good test. I've put in almost a day and a half into it now and still I sit here in a very odd place when it comes to putting my thoughts down onto the laptop. making me type out this review countless times as my head fights with my fingers once reading back what I type about the game. You all know the "it's alright" section is coming in the overall section of the review, that is obvious. But read on as I try my best to explain what the blooming game is all about. Well. at least from my eyes and my time with the game. 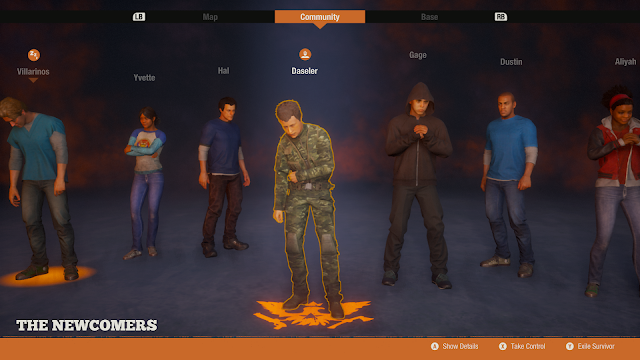 We've all planned for that obvious zombie apocalypse coming very soon right?  I know every time I go to town I have a little recon to make sure that my place is still in good shape. Making sure that nothing is blocking the obvious zip wires I will have to install from my high vantage point from my water tower to get easy and safe access to both train station and local supermarket. Ignore the fact I am 18+ stone of pure man and no way will I make it to the bottom of that previously mentioned zip line, just let me dream of looking cool for once in my life.

State of Decay 2 takes the whole survival of such an event and sticks it in a video game, with you taking control of a community of survivors after an outbreak, with every one of them able to die at any second, permanently. So no growing attached to them you hear? The one thing that has taken so long with this review coming out is just all the bloody information that is needed if you really want to know about everything in the game, making a review a pretty boring read if I'm being honest, but more importantly, just making it more of a bore to write. So I may miss stuff here and there, but just know that the main goal in the game is to simply survive, with you having to go outside the somewhat safe surroundings of your safehouse for all the stuff you will need to keep your community happy, or run the risk of them leaving or dying of starvation. 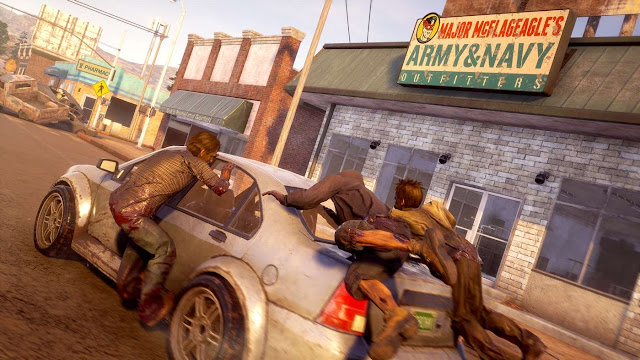 It all starts out all interesting when picking which duo to take through the tutorial as you learn the ropes, but once you get in the swing of things the game can feel somewhat of a grind fest like games such as Destiny. I'm the camp that enjoyed Destiny for two weeks and then began to see it for the content lacking title that it was, just doing what feels like the same thing over and over again. I'm not saying I've not had fun at times with SoD2 in my time with the game so far, I'm just saying it's not that much of an improvement on the first game when it comes to getting that hook into those who maybe never got on with the first game.

Once you got your safehouse up and running your main goal is getting your characters going out in this zombie filled town that you are stuck in looking for giant bags of food, meds, ammo, materials, and also fuel. You can do this lone soldier, or play with some online people, with the game being more fun when you have a good bunch of mates who are willing to go out and collect things with you. Well, that's if they aren't dic** who join your game and make a load of noise when as a group you are trying to clean out locations, ending with them alerting that nearby horde of undead, and risking the death of a character you spent hours with. The online aspect isn't something I got to dig that deep into sadly, with fellow reviewers moving on once they bashed out their reviews (we never get to hang about and carry on playing games we enjoy), and friends seemingly doing the same. Yes you can play with random folk, but I'm the kind of guy who likes to know the person a little who I'm playing with, so playing with a guy who can have your back one second only to drop out after alerting a horde of zombies or leave midway through taking down a plague heart, always put me on edge, so tended to go at the game alone. 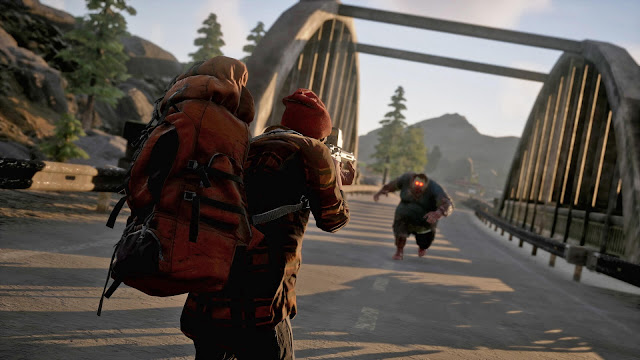 Loading into the game for the first time and getting my first safehouse I was able to add things like a garden which helped bring meds and food, and build a small Infirmary too, with the game 15 days later allowing one of my characters who had ranked up a bit to build one, but this time on a much larger scale, offering more bonuses to it as well. The characters can upgrade too with certain skills, with the game giving you the option of two choices once you fill all the stars up on that skill. Say you melee a lot, well keep doing this to rank it up enough and the choice will offer a slam or an attack which will kick zombies away, and so on and so on. This was cool and made the investment and worry of a death with each character even more terrifying. If I  lost the guy I spent most of my time with right now, I think I would actually cry.

The world itself has a few other things to do in it, with surveying points (read tall building or signpost with a ladder) allowing you to fill your map with location icons to go and investigate for a certain resource the community may need. Maybe finding an outpost which has an effect which might be worth adding to your collection, with it also being a place where you can switch characters and gain access to your supplies. You may also see some plague hearts that you can go and take down. These plague hearts being something that needs a decent amount of damage to be taken out, with zombies also around trying to end you while you try taking this down. Bombs and fire are good to have here. We will, however, skip over that the actual surveying and how it is done is lazily implemented by you just pressing LT when having a weapon equipped, which is somewhat pointless and just drags it out a little. Just getting up there and clicking a button and having these added to the map while the camera panned around would have looked a lot better.

Overall: I've already told you what's coming, but for those that skipped the other stuff above, well SOD2 is an alright game that would be about a 6.5 out of 10 if I was dropping numbers on you. It does things well in one area but also does a few things really bad in another. The good, being fun sometimes when going out and achieving something for your community. The bad, the game isn't the best when it comes to how it looks or runs sometimes. I've had a car fly over the fence of my safehouse after literally tapping a nearby cone. Leaving this car still stuck there to this day. I've had zombies floating in mid-air or stuck in fences or doors too. I wish these weren't a regular thing, but sadly they happened all the time. Giving the game that extra edge on you never knowing when it just might screw you over.
State of Decay 2