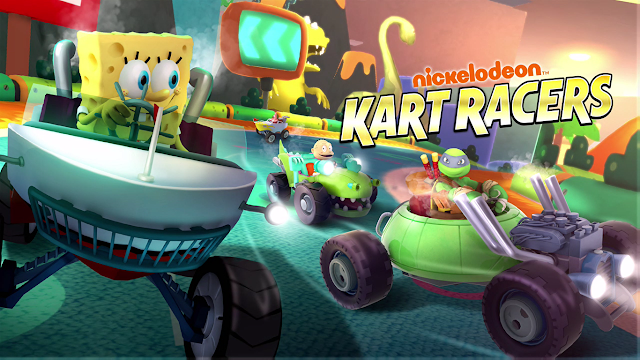 A quick review this one, with the game being aimed at a younger audience who are certainly not going to be interested in my normal waffling seen in other reviews. Gotta keep it PG this one.

Kart games are adored by both the young and older generation of gamers out there, with the older ones like myself being spoilt when it comes to good kart racers we've been lucky to play over the years. Any kart review always has to name-check the legendary kart racer that is Mario Kart, but I've also got fond memories of games such as Madagascar Karts, Sonic All-Stars if you're pushing it a little, and even games like Beach Buggy Racing, as I lost hours of that back when the kids played anything other than Fortnite and Roblox.

Nickelodeon Kart Racers gives players 12 nick favourites to choose from, with modes being somewhat limited, yet tracks offering a decent selection but not really throwing up anything different upon getting to race in each one. 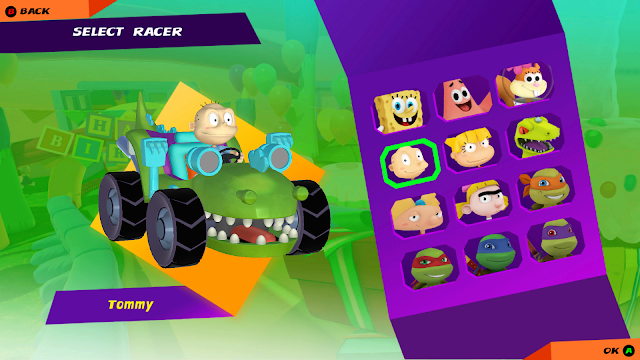 Modes first, and single players can, of course, play the classic Grand Prix mode seen in many kart racers before, with you basically need to win enough races, earning enough points to top the leaderboard when the final race is over to claim your trophy. You can do this solo or as part of a team, with you and an AI controlled partner earning points hoping for the same possible outcome. Free race is here too, but do I really need to explain this? Pick a track and character and race is simply the goal. And finally, time attack. Three laps, trying and finish fast enough to rank high enough to sit high on a leaderboard. That's it.

Local MP is here too. with anything up to 4 players and both Grand Prix and free race an option, but time attack being replaced by the battle arena, with free for all, capture the flag, and tag available for the arena. With it being local this is, of course, limited, but if you got kids and a bunch of pads then I can't see why it wouldn't be a mode they enjoy. Unless they're a sore loser of course. 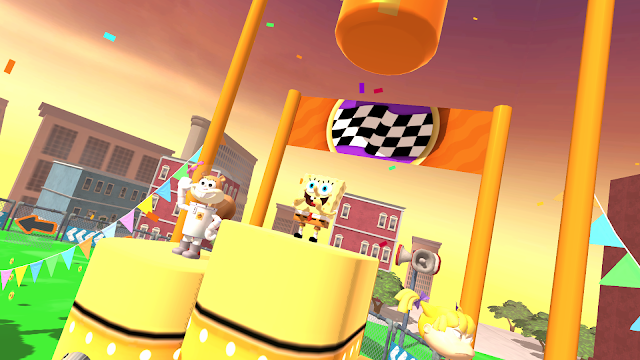 In terms of characters, you will have 12 Nick favourites to choose from, with the likes of Tommy & Angelica (why no Chuckie mmmm?) from the Rugrats to characters from Spongebob Squarepants, Turtles and Hey Arnold. Each character has their own mode of transport like I said earlier, with upgrades available via the shop menu on the main menu, or by ranking up and gaining access to a victory lap. In this victory lap, you can collect coins (these are also scattered around all races too for you to pick up) as well as chest which can contain items or even more coins. Coins can be spent in the shop where you can buy new tires, engines, spoilers, jet ski parts for when you kart takes to slime filled lakes on most levels, to new paint jobs for your kart. Each of those apart from the paint will also, of course, boost your karts stats a bit, with speed, acceleration, traction, handling, and slime handling being the areas that come into question. This is where the grinding comes in, with gaining coins being a pretty slow process with a victory lap being the best way to get them.

In terms of looks and fun, I mean as a 39-year-old man I can kinda say they do the job. A kid would of course not look at this game like I have, so for them, the bright colours and fun of driving Spongebob around in a boat will, of course, be way different than me picking up the pad to play. It does what you expect is all I can really say here. 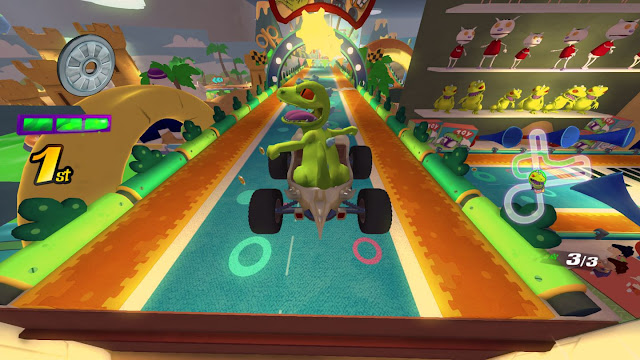 Overall: Two thoughts from me here, so first for the younger ones out there. This will tick all the right boxes if you are looking for a fun and colourful racer to play with some mates on your console (remember, no online).

Adults, I will just say this. While Nick Kart Racers is fun, there are many other lower priced kart games on the market that will offer the same fun, all be it without the likes of Tommy from Rugrats or the guys from Hey Arnold in it. On the Xbox store, this is currently £31.99/$39.99, so as an adult I'm sure you already know that perhaps a game like this is a little overpriced for what you get. Sure you get some familiar faces, colourful worlds to race in, hey, maybe even some fun at times if playing with the kids. So if the price above doesn't put you off then go for it. That said before you do drop the cash on it have a look at games like Beach Buggy Racing, Coffin Dodgers, hell even Sonic & All-Stars Racing Transformed which is slightly lower in price at the moment.
Nickelodeon Kart Racers