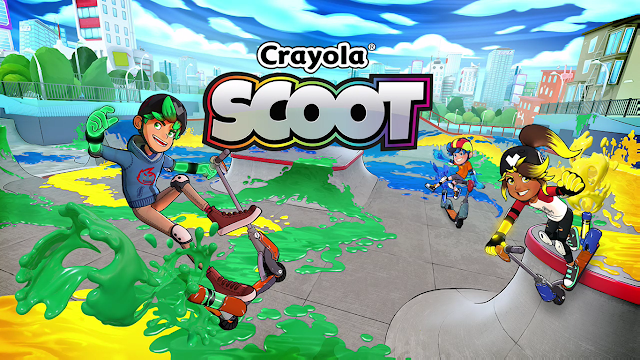 Crayola Scoot was one of those games I went into knowing what to expect. This after watching many preview videos who all seemingly found it hard not to mention a Tony Hawk's games while showing what it offered. Kinda like when you see a new top-down-racer and have to hold in games like Micro Machines, or a new fighting game and end up dropping Mortal Kombat or Street Fighter in the mix. We all do it, and half the time the actual gameplay doesn't come anywhere close to the classic games we mention. Deep down inside I knew this would be the case when loading up Crayola Scoot for myself, but I had to see it with my own eyes of course, as I'm not afraid of ever being proved wrong. Sure enough, the only similarities to this and a Tony Hawk game are the fact you ride on a thing with wheels around areas and perform tricks, and that boys and girls is where it ends.

Crayola Scoot goes for the bright and colourful world seen in games such as Splatoon, with the game certainly aimed at the younger gamers out there, with me as a 39-year-old not really going to be in awe or blown away by either of those things on my old tired eyes. The whole point of the game is you on a scooter making a mess with paint when performing tricks, as you work through events trying to make your way up a leaderboard called the Colour cup. Every time you rank up to a new fame level within the game you will face off against a boss in the game by playing a game of S.C.O.O.T, in which you must perform the best combo in a set time to win a point. Make them spell scoot and it's game over for them. The worlds have a number of events to play through to earn the fame points you need to face these bosses, with events like trick run (standard score the most points to win the match). Colour frenzy (colouring as much as the park area as you can before times runs out via tricks, triggers, and boosts). Crazy crayons (first to collect 5 crayons wins) being just a few of the games available to you. 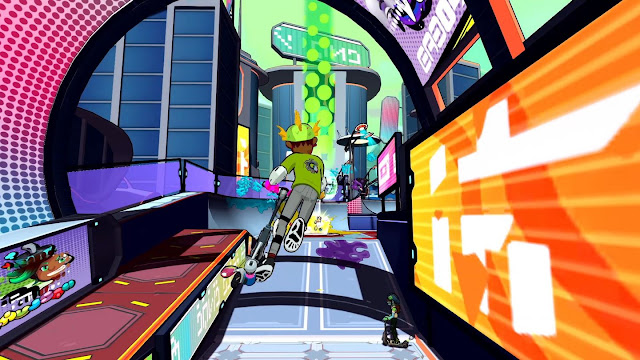 In terms of how things feel to play, Crayola Scoot uses the analog sticks for most of the controls, and buttons offering up the option to grind, brake, or boost. While the left analog stick is obviously the one you use to also steer your scooter, when in the air this also handles any sort of flips and spins within tricks, with the right analog being the one that handles all the fancy bits to a trick, and also being the jump button too. It works well for the game, but I did find myself just going nuts on the right analog when trying to perform tricks and hoping for a decent one when playing. That said, not being that difficult it will let the little ones enjoy playing it a lot more being this way, as they won't need to be that good to progress through the game.

Away from the single player the game also offers local play via the arcade mode. Here you can play with you and three other players in all the modes that the game has to offer. Fancy going solo? You can also just play against AI too if you wish to get to grips with some of the modes on offer, but your bread and butter will always be the career like mode mentioned previously. 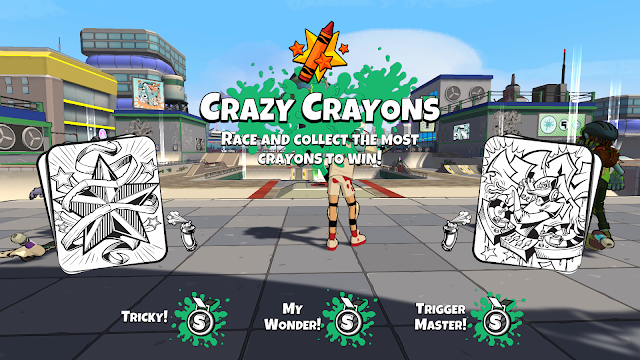 Along the way, you also earn coins to spend which you can visit the shop and buy some new items for your scooter, clothing for yourself, as well as changing your splat colour. Buying new parts for your scooter will improve it in one of five key areas, those being jumping, speed, handling, tricks, and boost. The three parts you can buy are handlebars, decks, and wheels, with each of these having eight items each for you to buy, with some only unlocking upon reaching a certain fame level. Achievements are available for having a certain stat full here so the reason to buy these and grinding out for coins will be more of a pull if you are an achievement hunter. In terms of your scooter feeling any different upon filling up let's say the handling stats, I can't say I really noticed at all. So pretty much a useless exercise otherwise.

Overall: Crayola Scoot is hardly going to set the world on fire or be anything a gamer over the age of 18 will sink a load of time into. Young kids who enjoy scooters and like making some mess will get a kick out of the game though, with it being a somewhat fun experience if given the chance, all be it a short-lived one if a single player kinda kid.
Crayola Scoot